Multiculturalism is one of those political words that liberals have successfully added to the day to day lexicon. It's become so that no business or political party can describe itself without employing multicultural language. One of liberalism's major crusades in the last generation has been to incorporate multiculturalism into everything, and make its lack seem like guilt or evidence of a crime. And all this championing of multiculturalism appears to make liberals seem friendly and interested in promoting different cultures. But in fact that's a fraud and a lie.

To begin with let's remember that America was always a collection of different cultures. Even in its earliest days, the Scot, the Englishman, the German, the Irishman, the Jew, the Russian, the Dutchman, the Frenchman and many others were part of the stew bubbling in the American kettle. As immigration expanded beyond a few European companies and states, the number of cultures in the mix expanded as well. This went on without an ideological program, but because American opportunity and freedom beckoned to people across the sea. Some such as indentured Irish servants or African slaves came without choice or freedom, but for the most part America has always consisted of people who wanted to live life in their own way. And no condition of involuntary servitude has endured in America for more than a century.

But when liberals talk about multiculturalism what they mean is very different from the existing American reality of people from different cultures valuing their own traditions while interacting with each other. Liberals pretend that multiculturalism overturns the old "hostile to different cultures" melting pot, but in fact the melting pot was itself a progressive liberal idea which sought to meld together all peoples into their idea of what a universal American should be. The melting pot has always reeked of centralized government controlled culture, which is exactly what it was, an attempt to manufacture an artificial American identity defined by their own values through government, popular culture and the education system. The people shaped by that process often became loyal Democratic party voters because they were taught a universalized political idea of Americanism that was quite alien to the real thing. And that version of Americanism, all festive banners festooning a base of progressive liberal ideas, can be seen everywhere today, including most vividly in Obama's Presidential campaign which successfully resurrected the symbols and rhetoric of the Great America era of liberalism, to cloak a far more radical agenda.

Liberal multiculturalism is the melting pot by a new name. It is still artificially constructed culture employed for political ends. It simply represents a change of tactics and a different brand. Where old line liberalism offered top down solutions, new line liberalism prefers to hide its collectivism in phony bottom up solutions. So where old line liberalism would simply have the government pass laws that would enforce their agenda, new line liberals prefer to spend time working the ground, setting up multiple front groups and creating a public demand for their agenda, before having the government pass laws that enforce their agenda. Multiculturalism follows that pattern by maintaining the myth that it represents change as derived from the people, rather than being like all liberal plans, imposed on the people.

But multiculturalism is also much more than just new liberalism, it's also the New Left. And where liberals wanted to build their ideal America, the New Left wants to tear most of it down. Where liberals, for all their criticism of American capitalism with some reforms, the New Left believes that the rot goes too deep for that, and believe that most of the country needs to be smashed and rebuilt in an entirely new reform. (The Obama Administration is almost entirely New Left, but cloaks itself in a liberal facade in order to appeal to more traditional Democratic party voters.) So where liberals once believed that the melting pot would lead to a better America, their modern day New Left equivalents view multiculturalism as a weapon aimed at America. Just as their European counterparts view it as a weapon against their own home countries.

What is liberal multiculturalism really? It's divide and conquer by a new name. The name multiculturalism suggests an authentic interest in different cultures, but the left has no use for culture except as a vehicle for political ideas or goals. The left does not see any element in society as politically neutral. Languages, scientific fields, artistic trends, fashion styles and anything you can imagine is classified as either reactionary or progressive. (Case in point, the USSR at one time banned the field of cybernetics, the Hebrew language and Cubism as counterrevolutionary.) To people who politicize everything, all cultures clearly cannot be of equal worth. Nor are they likely to have any interest in a cultural work on its own terms, only in relation to its larger social and political context. The same goes for ethnic, religious and racial groups.

Modern liberal multiculturalism is primarily racial, while sidelining everyone else into the "Privileged White Cultural Majority" tab, despite the fact that these represents a tremendous variety of cultures and groups. But this is not because the left itself is racist, but only because they look for outsider groups to exploit as a wedge against American society as a whole. Early 20th century liberals were often quite concerned and fascinated with Irish, Jewish and Italian workers. They wrote extensively on their plight and romanticized their traditions. However when these groups successfully moved up the ladder, and transitioned into the middle and upper classes, liberals sneeringly shoved them into the "Privileged White Majority" tab, because they no longer represented outsider cultures. And the left is only interested in outsider cultures.

Liberal multiculturalism is not a celebration of different cultures, it is the political exploitation of specific cultures and groups as a weapon against the larger American society. As outsiders, the left romanticizes them as primitive, natural and spiritual. It uses their "plight" as an indictment and proof of America's evil. But once they've made it, the left not only has no further interest in them, but sometimes even harbors an open hostility toward them for "betraying the revolution" by joining the middle class. This is an internal political game of Divide and Conquer, in which the left tries to manufacture and exploit Fifth Columns in order to take and hold power, and to radically transform American society as a whole.

Multiculturalism exists in order to promote diversity. Another politicized word, which like multiculturalism does not mean what it seems to mean. And diversity is of course defined from the top down, making the entire thing a fraud from the start, and exposing the entire thing as an affirmative action sham, itself a rebranding of the old quota systems that were part and parcel of the melting pot. Diversity is naturally limited to those cultures that the left considers to be of political value. Its actual goal is to replace the natural existing American multiculturalism, with an artificial one with purely political goals. The goal is not culture, but power. Diversity is not about actual diversity, it is about giving the left a tighter grip on the political, cultural and economic arteries, while shaking up the existing establishment and forcing it to live by its own codes.

Liberals do not care about cultivating an authentic diversity of cultures or even authentic cultures, what they want is to be able to repackage their own policies with the language of another culture, and sell it as empowerment and political change. This is a variation on the melting pot, in which liberals attempted to sell their own policies as a universal American identity. And their New Left core also wants to use those cultures as a weapon against America as a whole. This weaponization of culture is typical of the left's Marxist roots, in which every group and culture was to be enlisted in the worldwide revolutionary struggle under a variety of facades, until victory was achieved and they could all be forcibly unified into one.

With this same goal, the European left facilitated and propagandized for the large scale Muslim immigration that threatens to transform them into Eurabia. The left believed that it could weaponize Islam to radically transform their home countries. They were right and they were wrong. The Muslim immigrants they imported were already weaponized, and the left will one day wake up and realize that rather than weaponizing Muslims, the Muslims have weaponized them. That debate of course will only be settled by who ends up on top in the end. 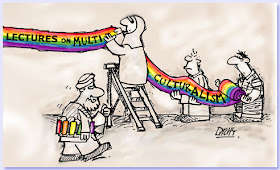 In America, liberals have weaponized racism, just as they once weaponized cultural and economic inequities. By weaponizing racism, they have turned it into a double edged sword, exploiting it on the one hand to attack their political enemies and on the other to attack members of minority groups with those same same racist stereotypes when they step out of line. This is how liberals routinely used racist attacks against Bush nominees, deriding them as tokens while treating their own minority nominees as victories for multiculturalism. So Condoleeza Rice was a "house slave" while Sotomayor was a "wise latina". To liberals there is no inconsistency, because by weaponizing racism, they also define racism in relation to their own political ideology. Thus a liberal can never truly be racist, because at the core they define racism not by discrimination or slurs used toward a group or race, but by resistance to the progressive force of liberalism-- which of course is inherently racist.

It is not about race, like everything else on the left, it is about politics. Culture and race are only vehicles for political agendas. Multiculturalism represents the weaponization of cultures and ethnicities for the political power of the left. They are not in fact interested in traditions, unless those traditions can be interpreted or adapted to suit their agendas. If not, they will manufacture traditions and overlay them across the existing traditions. When the left wishes to use them as agents of disruption, it will create havoc. When it wants to climb to power on their backs, it will turn them into marginalized voting bases. But it is never about accepting a multiplicity of cultures, but of enforcing a single idea. Their idea. Their way. And when seen correctly, all those facades of multiple cultures and beliefs recede into one.