When Kabul fell, the Taliban offered the Biden administration a deal. Either the United States could control the city until August 31, the terror group’s deadline, or the Taliban would. 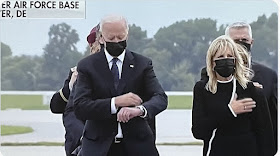 The Taliban may have been testing Biden, wary of a direct military confrontation with a large concentration of American forces, but if so they quickly learned that they had little to worry about. Instead of maintaining control over Kabul so that Americans could be speedily evacuated, the Biden administration and its cronies turned over the city to the Taliban.

And the Taliban turned to their most professional and deadliest assets. The Haqqani Network had been closely allied with Al Qaeda and picked up many of its tricks. Its commanders understood urban warfare, excelled at suicide and truck bombings, and had expert units whose commandos had been trained in Pakistan by the terror regime’s ISI secret agents.

The Taliban officially named Khalil al-Rahman Haqqani to head security in Kabul. The Haqqani Jihadist figure had a $5 million bounty on his head from the United States. Not long after the Biden administration made its deal with the devil, a designated foreign terrorist group and a specially designated terrorist controlled access for American refugees fleeing to Kabul’s airport.

The Biden administration made no protest. It did not complain that a terror group founded by one of Osama bin Laden’s mentors which had repeatedly targeted American soldiers with suicide bomb attacks, including the murder of a colonel and two lieutenant colonels by a car bomber, a truck bomb that wounded 77 American soldiers in a 9/11 anniversary attack on a base, and a truck bombing attack on another base, was “coordinating security” for Kabul airport.

Biden had been given the opportunity to create a secure escape route for American civilians escaping Afghanistan and to keep American soldiers safe in the city. Instead he set them up to be massacred by turning security in Kabul and around its airport over to a terrorist group.

Even while Biden falsely claimed at a press conference that Afghanistan would be nothing like Kabul, military and intelligence briefings had already prepared him for much worse. If someone had to take the PR hit for chasing away refugees and a botched evacuation, Biden preferred that the Taliban play the bad guys while he disavowed all responsibility. He didn’t care how many Americans died as long as he maintained plausible deniability to cover up their deaths.

Biden’s assumption that the Taliban could be trusted to do his dirty work without wanting anything in return except the end of our presence in Afghanistan was treasonously dumb.

Obama had assumed that the Muslim Brotherhood could be trusted in Egypt, Tunisia, and Libya. The attacks of September 11, 2012, climaxing in the Benghazi massacre, proved him wrong. Biden’s own Benghazi began the same way when he turned over power to Islamists while believing that they would be satisfied with just taking over a country.

When the Taliban turned over the checkpoints and security around Kabul airport to the Haqqani network, they were sending a clear signal that they were washing their hands of any attacks.

And the Biden administration, which had made the deal with the devil, could not hold the Taliban accountable without exposing its own complicity in this setup. The rest was all but inevitable.

The Taliban checkpoints failed to hold back the crowds from the airport even with bouts of occasional brutality. The Jihadists manning them had little interest in screening paperwork on behalf of the Kabul embassy, as Biden expected them to, instead they searched for Afghans on their lists. Once the State Department handed the Taliban its lists of approved Americans and Afghans, their real job of finding and detaining key officials and other figures became easier.

Americans continued to have trouble reaching the airport even while Biden and his cronies falsely claimed that there could be no problems with Al Qaeda’s allies running checkpoints.

Things got worse from there.

ISIS-K's leader, Shahab al-Muhajir, was a former Haqqani commander. The Islamic State affiliate had recruited heavily among the Taliban and, in particular the Haqqani Network.

Biden had put America’s worst enemies in charge of security around Kabul airport.

Gen. Frank McKenzie, who had originally met with Taliban officials to hear their offer to take Kabul, went on bragging that, "we use the Taliban as a tool to protect us as much as possible."

Who was using whom became obvious when an ISIS-K suicide bomber and gunmen who had gotten past the Haqqani checkpoints murdered 13 American military personnel.

Including eleven of McKenzie’s marines.

Biden made numerous mistakes that led to the fall of Afghanistan, including the abandonment of Bagram Air Base, which not only cut off a secure evacuation route, but freed countless Jihadis, some of whom may have even taken part in the Kabul airport attack. But the decision to turn over Kabul to the Taliban, and to turn over security around Kabul airport to allies of Al Qaeda whom the United States had designated as terrorists is nothing short of treasonous.

Democrats made a point of impeaching President Trump twice. In 1787, Senator William Blount became the first politician impeached over a plot to help the British take over Florida and Louisiana. Impeachment in the Constitution begins with “treason”, continues with “bribery”, and then finally with “high Crimes and Misdemeanors“. Section 3 defines treason only as “levying War against them, or in adhering to their Enemies, giving them Aid and Comfort.”

It’s hard to think of a clearer definition of aid and comfort than the massive amount of armaments that the Taliban and its Jihadists have picked up in Afghanistan.

Biden can claim that all of that was unintentional. But turning over Kabul to the Taliban at a time when thousands of Americans sheltered there was no accident. Nor was shrugging when the Taliban handed over access to Kabul airport to the Haqqani Network which is designated as a foreign terrorist organization.

These were treasonous acts whose foreseeable consequences are entirely his responsibility.

The Jihadists levied war against American military forces with the attack at Kabul airport.

Biden’s treason led to the murder of 13 American military personnel. His aid and comfort to the enemy, his adherence to the Taliban at the expense of American soldiers and civilians led to the massacre of Americans. And he can and should be impeached for his treasonous crimes.

Joe Biden’s treasonous decision to entrust American lives and security to the enemy was not committed out of any pure motive, but to protect his own political career. After decades of appeasing Islamic terrorists, Biden was only doing what came naturally to him. And he had either learned nothing from Benghazi or he simply did not care about the risk to Americans.

Like Blount and later Burr, Biden, the third ‘B’ in the bunch, committed treason out of self-interest, throwing in with America’s enemies because he thought it would profit him.

That does not lessen his treason. It worsens it.

America’s original traitors, men like Benedict Arnold and Aaron Burr, were motivated by greed, pride, and wounded egos. They did not believe in anything except themselves.

Biden’s treason is that of a career politician who will sacrifice anyone for his own sake.

President Trump was impeached over Ukraine, yet the impeachers could not point to a single American who had died in that country. 13 Americans have died in Afghanistan. The parents of some of these fallen men and women have come forward to demand justice. They deserve it.

Democrats currently control the Senate and the House. But that does not excuse Republicans from the need to confront Biden and hold him accountable by calling for impeachment anyway.

Even a failed effort will keep this issue alive and prevent the dead from being forgotten.

We all saw Biden checking his watch at Dover while waiting for the transfer of the men and women he killed to be complete. The dead Americans are no more to him than the Afghans whose deaths he had falsely dismissed as having happened, “four or five days ago.”

After another four or five days, Biden hopes that the dead Americans will be forgotten.

Biden is counting on Americans to have as bad a memory as he does. And if Republicans remain silent, pivoting to the next scandal or talking point, he will have been proven right.

The Americans murdered and betrayed by Biden deserve justice. They deserve to see the question of his impeachment raised and debated. And America’s honor deserves it too.

The world must not think that what it saw in Kabul represents a new American normal.

That would be devastating to our national security and to our honor. The world must know that what happened was a crime. And that Americans will work to hold the criminal accountable.
Daniel Greenfield is a Shillman Journalism Fellow at the David Horowitz Freedom Center. This article previously appeared at the Center's Front Page Magazine.