Joseph Robinette Biden Jr. graduated from the University of Delaware with a C average: the 506th student in a class of 688. When his grades weren’t C’s, they were usually D’s.

He then struggled through a JD from Syracuse University where he was nearly expelled after being caught plagiarizing a paper, and finally graduated 76th out of a class of 85 students. His academic performance was so miserable that an insecure Biden would spend much of his political career lying about academic successes that were humiliatingly exposed as frauds. 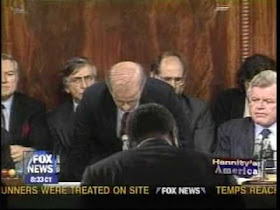 Biden falsely claimed that he had "graduated with three degrees from college", was "the outstanding student in the political science department", that he "went to law school on a full academic scholarship", that he was "in the top half" of his class. None of that ever happened.

Robinette was a bad law student and he did not make a good lawyer, bouncing from one firm to another, working briefly as a public defender without leaving any impression, and managing a pool. Successful young attorneys on their way up do not take jobs managing swimming pools.

Instead Biden went into politics and continued failing his way upward by crawling through the corrupt underbelly of Delaware politics. His first bid for the White House failed miserably, so did his second bid, and it seemed like he would become just another aging senator looking for an exit strategy to a lobbying firm or an industry trade group that would pay him a lot of money.

And then Obama decided to make Biden his number two, not because he liked him, but because he held the old white male politician in contempt. The final insult came when Obama picked Hillary to succeed him while offering Biden a Rose Garden press conference for his ego.

“And you know who really doesn’t have it? Joe Biden,” Obama sneered this time around.

During the primaries, Biden was forced to pretend he had asked Obama not to endorse him.

Joe Biden is a failer and he’s always been one. His career comes down to political grease and dumb luck. There has never been anyone at this position who has not accomplished a single thing except being in the right place at the right time, before invariably screwing it up.

Biden, as a young man, got into the Senate, and it didn’t take him long to become a national laughingstock, confining his career prospects to Delaware for a generation. Obama plucked him from obscurity, and Biden messed that up, getting dumped for Hillary. Now that he’s calling himself president-elect, the one thing to remember is that Biden always messes it up in the end.

Biden is a failer. He’s a C student who gets by on luck and then it all comes apart until someone takes pity on him, and he hangs on long enough to try for something bigger and messes that up.

President Trump is a fighter. Unlike politics, the free market is much less forgiving of failures. Nobody stays a billionaire because his investors, like Delaware voters, can’t be bothered to find a better prospect than a crooked old hack who gropes their wives and takes their money.

In business, you either make money or you don’t. In politics all you have to do is steal money.

Biden made money for other people, including his crooked family, by wetting his beak in a vast ocean of taxpayer money that was just there. President Trump had to turn profits using money that people were actually attached to, instead of vast reserves of misappropriated tax revenues.

President Trump has been in tough spots over and over again, and bounced back from them using grit, smarts, and determination. Biden never really learned to bounce back from anything. Politics is just a river that carried him along, and when he failed, as he invariably did, he just spent another decade in politics and then another one after that until an opportunity arrived.

Biden doesn’t know how to fight, but he is the greatest coaster in American politics.

Early in his failing career as a lawyer, Biden hooked up with the biggest crime organization in this country. The Democrat organization, sensing a certain gift for gab, a glib facility for lying indispensable to an otherwise failed law student and lawyer, put him up for public office, and carried him for a fifth of the age of the government of our great constitutional republic.

Biden could barely manage to campaign or get through an interview without a gaffe. There would have been nothing for him if Democrat organizations in Philly, Detroit, and key cities hadn’t conspired to up the ante on the ballot fraud to an absurd and catastrophic degree. It’s that same organization and its media apparatus that is fighting to drag him to the White House.

The Democrat organization carries Biden, but in this fight, Trump is carrying the GOP.

The natural Republican inclination isn’t to fight an election result. Nixon didn’t. If Florida had gone just as narrowly for Gore, as it did for Bush, would he have challenged the results?

And then the Democrats would have been in charge of America after September 11.

But President Trump’s natural instinct is to fight. And he’s dragging Republicans into the fight with him. That’s the definition of leadership. Nobody would ever accuse Biden of leading his party anywhere. Biden gets ideas all the time, like splitting up Iraq or sending $200 million to Iran, but nobody actually pays any attention to them. They nod politely and go on ignoring him.

If Biden were to ever get back into the Oval Office, he might have the title, but he would still be the crazy uncle whose Obamanoid staffers would humor him by listening to his rambling stories.

And then they would do what they were going to do all along anyway.

That’s also what the rest of the world would do every time they got a call from Joe Biden about anything that didn’t involve funneling money to his son, his brothers, or other Biden relatives.

Nobody has ever ignored President Trump. Failers get ignored: fighters are acknowledged.

One reason Obama respected Hillary and despised Biden is that she gave him a good fight. But Biden isn’t a fighter. He’s still the C student who tries to claim that he had a full scholarship.

In a fight to the finish, do you bet on the fighter or on the failer?

That’s the great question of American politics now. In a match between a street fighter and an organization man, who will prevail? Biden has the organization: and it is a vast organization encompassing not just the official structure of the Democrats, or the far greater network of activist groups funded by the wealthiest leftists in this country, or the media, but also a huge chunk of the oligarchy from Big Tech to Wall Street. But President Trump has the determination.

Presidents, like all leaders, can’t be organization men. That’s by constitutional design. Even when a weak politician is carried into the White House, he falls apart once he’s inside.

Anyone who gets to that level, good or bad, needs the innate drive and instincts to wield power. And Americans rarely make the mistake of choosing men so weak that, like Carter, they’re entirely unfit for the task at hand because of their weakness, rather than their bad character.

There’s a drive and a determination that takes men places. Some men make their destinities while others are fortunate enough to become made men. In a fight between a failer and a fighter, it’s the man who can fight who succeeds even when the odds are against him.

Biden never had the drive to succeed. He was a failure as a student, as a lawyer, as a politician, and managed to fail his way out of the White House the last time he was lucky enough to be there. “And you know who really doesn’t have it? Joe Biden,” Obama said this election cycle.

He still doesn’t. Trump does.
Daniel Greenfield, a Shillman Journalism Fellow at the Freedom Center, is an investigative journalist and writer focusing on the radical Left and Islamic terrorism.
Daniel Greenfield at November 18, 2020
Share