Rep. Alexandria Ocasio Cortez Returns to The Place She Cost Thousands of Jobs

“I am back,” Senator Bernie Sanders declared in Queensbridge Park: under the shadow of Queensbridge Houses, the country’s biggest housing project and its biggest failed experiments in government housing. 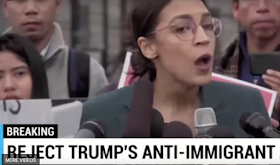 Cabrini–Green, Pruitt–Igoe, and other mammoth projects have been demolished. Queensbridge or
'the Bridge' lingers on as the nation's worst socialist housing eyesore where nothing works except the guns.

Aides and proxies for the socialist politician insisted that the location was sending a message.

“Queensbridge was a deliberate choice,” one of his aides claimed.

It’s a hell of a choice.

The comeback rally was built around Rep. Alexandria Ocasio Cortez’s endorsement of Sanders. Cortez had famously helped scuttle the deal that would have brought a coveted Amazon HQ to New York.

The location of that planned HQ would have been in Long Island City, near Queensbridge Houses. Amazon was bringing a potential 25,000 jobs. Queensbridge Houses, the largest housing project in the country, has 6,600 residents. Most of them are poor. A large number are unemployed.

Amazon would have brought job fairs and resume training to Queensbridge for 3 years. Instead, Queensbridge Houses gets a rally for the smug socialist who took away the future of its residents.

Assemblyman Ron Kim bizarrely claimed that Bernie's rally was a "a metaphor for all Americans who feel neglected by Wall Street.”

It's hard to think of a worse socialist metaphor than coming to a place to which a company tried to bring 25,000 jobs before being driven out by a Bernie Sanders ally to complain that capitalists don’t care.

"All the people protesting, where are they now?" Billy Robinson, a community activist had asked, weeks after Amazon pulled out, under pressure from the socialists, leaving local residents with nothing.

Rep. Alexandria Ocasio Cortez went off to get a $300 haircut. Then she and Bernie, a socialist millionaire 1 percenter, returned to celebrate their own greatness in a place where the median income is $15,843.

Time to come back and ignore all the thousands of black people whose lives AOC ruined.

“It wasn’t until I heard of a man by the name of Bernie Sanders that I began to question and assert and recognize my inherent value as a human being," the obnoxious rich girl from Westchester claimed.

So, Rep. Cortez hadn’t recognized her value as a human being until she turned 26?

Sanders called the socialist brat "an inspiration to millions of young people, not just here in New York, but across this country."

It’s doubtful that Cortez is an inspiration to anyone in Queensbridge Houses. They don’t get $300 haircuts in the ‘Bridge’. It did, at one time, hold the record for the highest numbers of murders of any housing project in the city. Last year, Queensbridge managed to goose murder rates with 3 shootings in 1 week as the five gangs based out of the mammoth project battled four gangs from another project.

None of them showed up to the Sanders-Cortez socialist lovefest.

“A few miles away from here, people on Wall Street make unbelievable amounts of money and live in incredible and ostentatious luxury,” Bernie Sanders screeched, “while right here, across the street from us, people are struggling day after day just to survive.”

But Sanders neglects to mention that they’re struggling to survive being shot at by fellow residents.

"You heard of us, official Queensbridge murderers," Mobb Deep rapped in Shook Ones (Part II) back in the day. "You all alone in these streets, cousin. Every man for they self in this land we be gunnin'."

People on Wall Street do make lots of money. Some of that money nearly found its way to Queensbridge. And then Rep. Alexandria Ocasio Cortez stepped in to make sure it didn’t happen.

The Sanders and Cortez rally was a sea of white faces. That mob of lefties, estimated at 26,000, didn’t come from Queensbridge Houses. There were probably more people who worked on Wall Street in that crowd than people who live in the housing project complex.

None of the three headliners of the Bernie’s Back rally, Bernie Sanders, Michael Moore (who had been dug up from a time capsule left behind in 2007), and Alexandria Ocasio Cortez, are black.

Somebody in the most culturally illiterate political campaign since Hillary Clinton’s abuela imbroglio decided to bring in Michael Moore to headline a rally at one of the birthplaces of hip-hop music.

In Bernie’s mind, Queensbridge Houses is a pristine experiment in socialized housing from 1939 and a model of how government intervention can bring equality through subsidized housing. In the real world, the ‘Bridge’ was a disastrous progressive experiment right from the very beginning.

The mammoth complex of Y-shaped grayish-brown buildings looked like a prison. Like the even more infamous Pruitt-Igoe complex, its elevators skipped every other floor. All the modern designs, like asbestos tiles, that were supposed to transform housing did not hold up once the 1939 World’s Fair had come and gone. And the residents added to the fun by trashing ‘the Bridge’ into a miserable hellhole.

Or the triumph of socialism in action.

Nothing works in Queensbridge Houses. And nothing has worked for generations. The elevators don’t open. The doors don’t close. And the heat and gas come and go. The roofs leak and the mold grows.

Last year, HUD Secretary Ben Carson visited Queensbridge and suggested a federal takeover. One of the buildings hadn’t had any gas for four months.

This year, Senator Bernie Sanders and Rep. Alexandria Cortez showed up to call for more of the same.

"Safe and decent housing is an essential right," Sanders insisted.

Queensbridge Houses shows how that ‘right’ works out in real life. The housing projects of Queensbridge mirror the miserable experiments in mass housing of Bernie’s old USSR. They’re built badly, they don’t work, and they exist only to serve as receptacles of endless human misery.

Bernie came to the site of one of socialism’s worst failures in New York City. Rep. Alexandria Ocasio Cortez showed up to the place where she stole thousands of jobs from its poor black residents.

A mob of white lefties followed them to an area they wouldn’t usually set foot in.

The only purpose of this disgusting farce was trying to revive Bernie’s failed campaign while giving Rep. Alexandria Ocasio Cortez leverage to negotiate her eventual endorsement of Elizabeth Warren.

Nobody involved showed any real concern for the thousands of black people they were using as props.

"We want a justice system that doesn’t gun down Black folks in their houses," Bernie Sanders ranted at a building complex where black gang members are the ones killing people.

He called for a Green New Deal by buildings where people routinely don't have heating or cooking gas for months.

If the white lefty hipsters chanting for social justice wanted to see the reality of what the visionary policies they support look like in the real world, all they had to do was spend some time in ‘the Bridge’.

Instead, in the shadow of one of socialism’s biggest failures, Bernie demanded more socialism.