A Tiny Minority of a Million Muslims in America

The US Council of Muslim Organizations (USCMO) is boasting that its voter registration campaign “One Million Voters” across mosques and schools has doubled the number of registered Muslim voters to over a million. 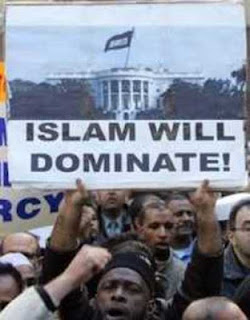 The media is cheering this development even though USCMO has a history that makes the KKK look downright sunny. USCMO was in the news last year for its statement denying the Muslim genocide of Armenians and arguing that any recognition of the massacre must also recognize “Muslim suffering.”

USCMO's Secretary General Oussama Jammal had engaged in 9/11 Trutherism at a rally backing a Hamas supporter. He was president of the Bridgeview Mosque which raised money for the head of Islamic Jihad. The Chicago Tribune described this as the result of a “hard line” takeover of the mosque.

The Bridgeview mosque had been interlinked with the Islamic Association for Palestine which had been set up by the Muslim Brotherhood and featured Hamas operatives such as Mousa Abu Marzook. Jammal had received a “Mosque of the Year” award from KindHearts, a terror charity that was shut down for its ties to Hamas.

Jammal had blamed the Jews for the government’s actions, claiming that there was a “Zionist agenda” at work.

The US Council of Muslim Organizations includes American Muslims for Palestine; an anti-Israel hate group headed by the notorious campus bigot Hatem Bazian. AMP is openly supportive of Hamas terror. Its national campus coordinator has said that, “Hamas’ rockets are an oppressed people’s audible cry for help.” At one of its conferences, there was a lecture on how to “navigate the fine line between legal activism and material support for terrorism.” Its Vice President defended Islamic terrorism.

Along with AMP, USCMO’s founding members include CAIR, an unindicted terror co-conspirator in terror finance. It also includes ICNA, whose former secretary general was convicted of Islamic war crimes by Bangladesh's International Crimes Tribunal. Some of the victims of Islamic terror had their eyes gouged out, hearts removed and their breasts cut off by of the student wing of Jamaat-e-Islami.

The monster had written in ICNA’s convention program that Muslims "have a culture and civilization which once ruled the world and still has the viability to rule the world again."

The ICNA Member's Hand Book insists that Islam has to be made “a way of life for all.” Under “Goal,” its charter declares, “The goal of ICNA shall be to seek the pleasure of Allah through the struggle for Iqamat-ud-Deen (establishment of the Islamic system of life) as spelled out in the Qur’an and the Sunnah of Prophet Muhammad.” The hand book calls for the establishment of an Islamic State.

Like ISIS, this will be a Caliphate governed by the everyday horror of Sharia law.

Registering a million Muslims to vote is a means to that end. The end is the Islamic State of the Caliphate. And that would mean the end of America.

Next on the list of Founding Members for USCMO is the Muslim Alliance in North America. MANA was co-founded by Siraj Wahhaj, an unindicted co-conspirator in the World Trade Center bombing.

Siraj Wahhaj is also a board member of USCMO.

Wahhaj insisted that America would fall unless it "accepts the Islamic agenda." He called for taking over the United States and replacing it with a Caliphate. “If we were united and strong… we'd elect our own emir and give allegiance to him.... if 6-8 million Muslims unite in America, the country will come to us.”

Registering a million Muslims would certainly be a step in that direction. And Wahhaj had been rather clear that involvement in politics is a war against America. “You don’t get involved in politics because it’s the American thing to do. You get involved in politics because politics are a weapon to use in the cause of Islam.” The one million Muslim voter registrations should be seen as a weapon in the cause of Islam.

A weapon aimed at America. Islam is a gun that kills freedom.

“In time, democracy will crumble, and there will be nothing, and the only thing that will remain will be Islam,” Wahhaj has declared.

The question is whether we really are ready to allow Muslim colonists to crumble our democracy and replace it with an Islamic State of slavery, oppression and Muslim Supremacism.

Another Founding Member of USCMO is the Muslim American Society which was described by federal prosecutors as “as the overt arm of the Muslim Brotherhood in America.” It called Osama bin Laden “a visionary who believed in the possibility of an Islamic state in Afghanistan.”

How many of USCMO’s Muslims believe in the possibility of an Islamic state in America?

USCMO’s board includes Siraj Wahhaj who has been forthright about his goal of an Islamic takeover. Also on the board is CAIR’s Nihad Awad who has said, “I am in support of the Hamas movement.”

AMP’s Osama Abu Irshaid, another Hamas supporter, also sits on the board. Then there’s Mazen Mokhtar who had been accused of soliciting funds for Al Qaeda. He also claimed that Hamas terrorism is “heroic.” Khalil Meek of the Muslim Legal Fund of America was the spokesman for a coalition defending the Holy Land Foundation which was convicted of funding Hamas’ campaign of racist Islamic terror against Jews.

USCMO is claiming credit for the mass Muslim voter registration. We like to believe that Muslims who support the kind of views you have read above are merely a tiny minority of extremists. It would be rather grim if the millions of Muslim settlers living in this country really do want to overthrow our free society and replace it with an Islamic State in which non-Muslims and women lose their civil rights.

And yet, if such views really represent only a tiny minority of extremists, why do such huge numbers of Muslims allow themselves to be represented by these extremists? Either these million Muslims are willing to let the “extremists” call the shots or they agree with them. And in that case the tiny minority becomes a growing majority. And that growing majority is a threat to the United States of America.

When Islamist groups that seek to overthrow America boast of doubling Muslim voter registrations, that’s not a triumph for democracy. It is, as some of USCMO’s Islamists have said, a threat to it.
Daniel Greenfield at November 21, 2016
Share