Millions and Millions of Mohammeds

Before Mohammad Youssduf Adulazeer shot up a military recruiting center in Chattanooga from a car and then sped away, another Mohammed, Abdulhakim Mujahid Muhammad did much the same thing in 2009.

Both struck military recruiting centers in the South, but the 2009 Mohammed had a message for

Americans that we unfortunately failed to heed.

"This is not the first attack, and won't be the last," Muhammad warned. “I'm just one Muhammad. There are millions of Muhammads out there. And I hope and pray the next one be more deadlier than Muhammad Atta!”

There are millions of Mohammeds out there. It took exactly six years for one of them to finish what his predecessor started. In a world with lots of Mohammeds, we really need to consider whether we want Mohammed becoming the most common name for a boy in America, as it already has in countries like the UK.

The murderous Mohammeds embody the values of the original Mohammed, the founder of their brutal ideology. They kill like him. They kill in his name.

A country with more Mohammeds, is a country with more Muslim terrorism. And if the first Mohammed doesn't kill enough people, the next one will. We have to be lucky every time. The Mohammeds only have to be lucky once for there to be a bloody scene, handfuls of wilted flowers at makeshift memorials on concrete and Americans crying because a Mohammed has struck again.
Americans that unfortunately went unheeded.

The family that names a son Mohammed believes that the warlord who raped and murdered his way across Arabia in a manner that ISIS copied was a model for human behavior. Is it any surprise that the model Mohammed eventually imitates his bloody namesake's crimes?

When a Mohammed rapes young girls in the UK, as quite a few of them have, he is only doing what his prophet did. When a Mohammed opens fire on American soldiers, he is following the teachings of his namesake and prophet. Why blame a Mohammed for acting like Mohammed?

During WW2, we would not have allowed millions of Germans named after the Fuhrer, who admired him and worshiped him, into the country. And if we had done something that stupid, we would have had only ourselves to blame when the darling Adolfs shot and bombed their way across America.

A country with more Mohammeds is a more dangerous place. If a million mothers named their offspring after Charles Manson and raised them to embody Manson Family values, America would be a much scarier place. An America with a million Mohammeds will be even worse. 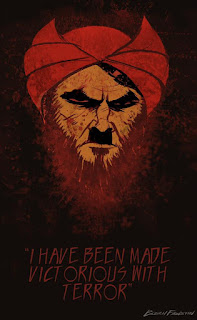 The mass murdering Mohammeds offer us a simple choice. Do we want to keep allowing people named after the Muslim Charles Manson whose big goals in life were killing non-Muslims and raping their wives and daughters in the name of tolerance or do we want to end this threat of terrorism?

Importing Mohammeds and Adolfs is no way to be tolerant. It feeds the cycle of terror, the bombs, the rapes, the shootings, the whines, the protests and the falling buildings. The first Mohammed kills and another Mohammed pops up to protest that he was only acting out of outrage. A third Mohammed emerges to kill because we arrested the first Mohammed. A fourth Mohammed demands that we free all the Mohammeds or he won't be able to stop the fifth Mohammed from becoming radicalized. Then the sixth Mohammed kills a bunch of people and the seventh Mohammed claims that he has nothing to do with Mohammedanism, which is a peaceful religion, but that we must stop offending Mohammeds or he won't be responsible for what the next thousand Mohammeds do.

When there's a hole in a boat, you stop drilling. When a bunch of people named Mohammed keep killing Americans, it's time to tell the next million Mohammeds applying for a visa, "Sorry, no."

America does not need immigrants who view mass murderers as role models. On the list of the least desirable immigrants, Mohammed should rank somewhere below a leprous beggar, a convicted rapist with AIDS and Piers Morgan.

In a country where the Dukes of Hazzard is now a hate crime, we seem bent on importing people who model racist murders, slavery and rape as the highest of all human virtues. And then we're baffled when a Mohammed acts like a Mohammed. The clue is right in the name. 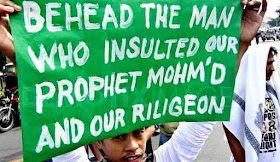 Muslims and the left are united in suppressing any discussion about Mohammed because if we were to recognize that the very model of a major Muslim prophet would be serving a life sentence in solitary confinement if he were alive today, much like many of his Mohammed disciples are serving today, then maybe there's something wrong with all the Mohammeds and with Mohammedanism.

Mohammad Youssduf Adulazeer boasted that his name triggers security alerts. And it should have. Instead he was allowed to work in a nuclear power plant despite his father's donations to Hamas.

Being named after a mass murderer is bad. Being named after a mass murderer by a cult that worships him to the degree that they won't even allow his image to be depicted is a scary sign. If we don't want the seventh century crimes of Mohammed being repeated in our own countries today, then the name Mohammed should trigger security alerts and flight bans.

We need to have a serious dialogue about what to expect from a boy named after a serial killer by a cult that worships that serial killer. And we need to have it before the next Mohammed shoots up the place.
Daniel Greenfield at July 19, 2015
Share