You're In the New Army Now

Sending women into combat, like the end of the ban on official homosexuality, has been met with worried remarks about its impact on the "warrior culture". But the new military that the left has been building for some time now is not interested in warriors; it wants peacekeepers. 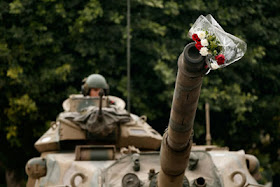 The old army fought for a nation. The new one fights for vague concepts such as human rights or international law. Its goals are as intangible as those of the ideology it serves. It doesn't fight actual enemies, but concepts and social problems. It fights against climate change, poverty and obesity. It fights for education, tolerance and the right of everyone to the gender of their choice. It isn't really the army, it's the hall monitors of the United Nations, the State Department, NATO and every liberal group on the planet.

Their ideal new soldier is not a warrior; he speaks three languages, appears non-threatening and can direct refugees, hand out aid to them and quickly pick up the local culture and religion. He is uncritical when witnessing child molestation, human sacrifice or any other quaint local custom. He is willing to die, not for his country, but to win the hearts and minds of the locals. He will not fire in self-defense if there is a single unarmed man, woman or child within twenty miles.

American soldiers have played the role of peacekeepers before, but in the new military that is their only role. They are the Peace Corps,  riding in under a U.N. flag when the video game boys back across the ocean have used remote drones to take out that portion of the enemy force that didn't manage to find a human shield in time. Their mission is to set up generators, dig wells, patrol roads and smile a lot, unless smiling is not approved of by the local culture.

A warrior culture is supplementary to peacekeeping requirements. Warriors try to kill things. They want to win wars, instead of accepting that conflicts can only be resolved through negotiations and that their presence is a negotiating tactic, not a fight for survival.

The new soldier is a policeman of the world, watching crimes that he isn't allowed to stop. He is a diplomat with a gun. He isn't there to shoot anyone, except as an absolute last resort. Rather he is there to represent the United States on that great mission that is the only task of worth in a fatherless country, to be a role model. He is there, smiling and handing out candy, to convince the locals that even though we bombed their country, frightened their sheep and wiped out a lot of their smuggling income, that they should not hate the United States of America.

The old army projected the hard power of killing the people who wanted to fight us until they were either dead or willing to switch to competing with us by making transistor radios and electric shavers. The new army projects the soft power of winning over the locals so that they don't want to fight us anymore. It's not about winning wars, it's about preventing the need for wars; even when already in the middle of a war.

To do all this our military has to become less American and more European, less imperial and more multilateral, an international consensus building exercise with bullets that aren't meant to be fired. It has to become more tolerant and accepting. It has to lose the "warrior culture" and swap it in for the urban liberal culture that values consensus over performance and ideological conformity over all else. 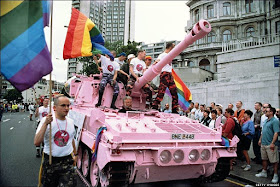 The left is not comfortable with an army that is out of step with its values. A large standing army is a dangerous thing. Neutering it will take generations, but the left just won another four years in which it can have its way with national defense. And its way is to hollow out every institution, religion, workplace and family until they exist for no other reason than to pass on and implement its ideas.

The only way that liberals will ever accept the military is through the liberalization of the military into a force that projects their social values and fights to promote them abroad through human rights peacekeeping operations, rather than national defense. And when the peacekeeping force arrives in Timbuktu, Aleppo or Ramallah, it has to carry with it the liberal standard and convey to all the natives that the United States is wonderful because it represents gay rights, girl power and the wars on obesity, poverty and cholera.

The natives will not be impressed, nor will the men and women who will have to do far more shooting and dying than the plan called for, but Washington D.C. will be gratified, and the worst of the bunch, the ones who eagerly take to the party line and do none of the fighting but all of the talking will move up the promotion ladder, those who do not will be tried for war crimes in a new army that reflects the liberal belief that war is the ultimate crime.

Much of this has already happened. The United States no longer fights wars, it engages in military reconstruction projects. The aftermath of World War II has become the template for every war with the conflict as a prelude to the nation-building exercise. Occupation becomes the purpose of war and also the bloodiest part of the war. And the wars can hardly even be called wars because they are never truly fought.

The "Shock and Awe" punch is always pulled as the jets fly overhead but never hit hard enough in the new soft power age. The war is taken to the enemy just enough to cost a lot of lives, but not enough to defeat him. Instead of a definite trajectory, there is only an endless twilight, a holding action being fought by a new generation of men realizing that like their fathers, they are no longer in it to win it. The real war is being waged by politicians using troop deployments as counters for cobbling together coalitions of the people they are fighting into a working government.

Yesterday's insurgent is tomorrow's ally arriving to be armed and trained as a police officer or soldier and the day after tomorrow's enemy, unexpectedly turning his weapon on the men who trained him. There is no sense in such wars, and less honor and fulfillment in fighting them. These are not the wars of a warrior culture, but of the police patrols in the more dangerous parts of Detroit, Miami or Chicago. Long senseless conflicts in which victory is not even a relevant concept, and the only hope for going home lies in following the rules of community policing when breaking bread and working out truces with the local gangs and their drug dealing warlords long enough for them to throw together a sham government that will allow Washington D.C. to declare another humanitarian mission accomplished.

The new general has all the problems of an empire, without any of the power and freedom of action of an empire. The new colonel is looking to write a book about the lessons he learned from meeting other cultures in the hopes of getting the attention of the boys upstairs who are always concerned with finding new ways of winning the hearts and minds of the people sending soldiers home in body bags. The new captain is growing a beard and learning Urdu. The new lieutenant is making sure that all the transsexual servicethings are comfortable and serving in a friendly welcoming environment. And the new soldier is there to represent a country that he no longer recognizes in a country where everyone is trying to kill him. 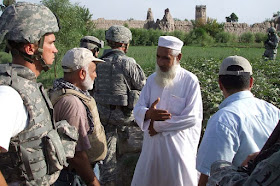 Warrior culture is still necessary, even mandatory, but it's also outlawed. Like the urban police force, the ethos must be smuggled in under a disguise of community policing and midnight basketball. It's there because without it nothing will happen except a tripling of the murder rate. It's there despite the social reformers and social workers, the progressive policymakers and the visionaries in ivory towers. It's there because when things get bad enough, the politicians who demonize guns and shame the little boys who still want to play cowboys and aliens during recess need them to save the day. And that's the new army too.

The new soldier is expected to be a psychological cripple or a social worker with nothing in between because there is no longer any room for the warrior, only the worrier, the neurotic who knows that he is moral because he is always questioning everything except his own intelligence and his premises. He knows that he will more likely be honored for cowardice under fire, than courage under fire, and that the greatest honors will go not those who dare, but to those who exemplify a political quota. And yet among the ranks of the new soldiers, the old soldiers still predominate, doing the hard thankless work of keeping a national defense establishment that does not care for them from falling apart.
Daniel Greenfield at January 26, 2013
Share