There are few weapons as deadly as the Israeli house. When its bricks and mortar are combined together, the house, whether it is one of those modest one story hilltop affairs or a five floor apartment building complete with hot and cold running water, becomes far more dangerous than anything green and glowing that comes out of the Iranian centrifuges. 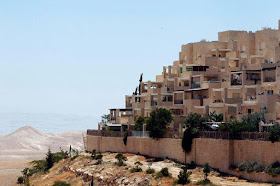 Forget the cluster bomb and the mine, the poison gas shell and even tailored viruses. Iran can keep its nuclear bombs. They don't impress anyone in Europe or in Washington DC. Genocide is equally not worthy of attention when in the presence of the fearsome weapon of terror that is an Israeli family of four moving into a new apartment downwind from Jerusalem.

Sudan may have built a small mountain of African corpses, but it can't expect to command the full and undivided attention of the world until it does something truly outrageous like building a house and filling it with Jews. Since the Sudanese Jews are as gone as the Jews of Egypt, Iraq, Syria and good old Afghanistan, the chances of Bashir the Butcher pulling off that trick are rather slim.

Due to the Muslim world's shortsightedness in driving out its Jews from Cairo, Aleppo and Baghdad  to Jerusalem, the ultimate weapon in international affairs is entirely controlled by the Jewish State. The Jewish State's stockpile of Jews should worry the international community far more than its hypothetical stockpiles of nuclear weapons. No one besides Israel, and possibly Saudi Arabia, cares much about the Iranian bomb. But when Israel builds a house, then the international community tears its clothes, wails, threatens to recall its ambassadors and boycott Israeli peaches.

You can spit on the White House carpets and steal all the gold in Greece. You can blow up anything you like and threaten anyone you will, but you had better not lift a drill near Gilgal, where Joshua and a few million escaped Hebrew slaves pitched their camp.

Some may think that genocide or nuclear weapons are the ultimate weapons, but as we see, time and time again, the ultimate weapon is a hammer and a fistful of nails in a Jewish hand. How can even the most talented Iranian nuclear scientist hope to compete with the humble tools of a Jewish carpenter?

Obama has yet to respond to the Muslim Brotherhood coup in Egypt. The gangs of paid rapists assaulting women in Tahrir Square on behalf of the Sharia state are nothing for the White House to worry about. Tunisian protesters against Islamist rule are losing their eyes, but Tunisian eyes come and go, Jewish houses are forever.

Everyone has their standards and he and the international community have theirs. There are things that we all cannot abide. And for all the Miss America answers about ending war, hunger and people who wear plaid in public, the one thing that everyone will stand up against or sit down in opposition to is the Israeli house.

White House officials are already insisting that Netanyahu "humiliated" Obama by authorizing the building of houses. This is the worst Israeli crime since two years ago when the city of Jerusalem passed some houses through one stage of a multi-stage approval process while Biden was visiting the country.

Hillary called it an insult and spent two hours yelling at Netanyahu over the phone. Axelrod declared it an affront. Biden was so furious that he refused to come down for dinner until an hour later. For weeks the media howled that Netanyahu had humiliated Obama through the dastardly act of allowing one of the country's mayors to approve housing while the sacred presence of Joseph Robinette Biden Jr was intersecting with Israeli airspace.

While Russia may threaten war against the United States, China may mock the United States at a ceremonial banquet in the White House, Iran and North Korea may play Obama for a fool, but only Israel has managed to achieve official recognition for "insulting and humiliating" Obama, without even trying, proving once again that the Jewish race is so talented that it often achieves things that other people may only dream of, without even realizing that they are doing it.

Now that Netanyahu has gone to the mattresses, literally, by authorizing new housing, the media has begun braying that Israel has humiliated Obama all over again. They say that every time a bell rings, an angel gets his wings. But every time an Israeli jackhammer roars, Obama stands, like that famous trash-mourning fake Indian, off Highway 1 between Jerusalem and Tel Aviv, with a tear slowly making its way down one glistening cheek at the sight of another humiliating Israeli house. 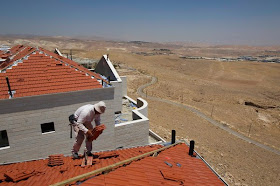 According to the New York Times, which is never wrong, building more houses makes peace impossible. Peace, which is not in any way obstructed by rockets, suicide bombers, unilateral statehood bids and declarations of war, comes up against only one obstacle. The stout unyielding wall of the Israeli house. You can shell Israeli houses, bomb them and break inside to massacre the people living inside, but then after all that, Israel goes and builds more of those damn things.

Hamas shoots thousands of rockets and Israel builds thousands of houses. But Israeli houses generally stay where they're built, while Hamas rockets are as likely to kill Gazans as they are to put holes in the roofs of those dastardly houses. And in the arms race between houses and rockets, the Israelis appear to be winning. And that's not good for peace. If Israelis get the dangerous idea that they can just keep building houses and outlast all the talented rocketeers who spend their time with the Koran in front of one eye and the Anarchist's Cookbook in front of the other, then what hope is there for peace?

That is why no one cares much about Hamas rockets, which only kill Israelis, who most reasonable people in London, Paris and Brussels think have it coming anyway, but get into a foaming lather about an Israeli house. Killing Israelis has never been any obstacle to peace. Twenty years of killing Israelis has not dissuaded a single Israeli government from sitting down at the table to dicker with the terrorists. But an Israeli family living in a house is holding down territory that it will be harder to then cede to terrorists when the angels have blown their horns, the seas have all gone dry and peace is carried in on a golden platter by 72 virgins accompanied by their flying suicide bomber mates.

The problem is an old one. Pharaoh struggled with it. So did Hitler. And so does Hamas. What do you do when there are too many Jews living. The answer is usually obvious.

Israel's Peace Partners tried to go back to the time-honored Egyptian tradition of throwing all the Jews into the sea. But despite an entire officer corps temporarily "on leave" from the armed forces of the United Kingdom, they only got as far as half of Jerusalem, where they blew up every synagogue, and took the West Bank of Israel, or as the non-indigenous Zionist invaders with no roots in the region call it, Judea and Samaria.

Nineteen years later, Israel's Peace Partners had traded in their British officer corps for a Soviet officer corps, and lost Jerusalem, the West Bank and Gaza, proving that when it came to killing Jews, the Communists were better at it when the Jews weren't shooting back. Ever since then the world, or those portions of it populated entirely by diplomats and the better class of journalists, has been urging Israel to give back the land to an imaginary country to be populated entirely by terrorists.

This peace plan, which has worked as well as fighting fire with gasoline, has not in any way been endangered by two decades of terror, but trembles down to its toes every time an Israeli hammer falls on an Israeli nail in the vicinity of Jerusalem. Because that land must go back so that rockets can be shot from it into Israel, so that Israel can invade it and reclaim it, and then sit down for another peace process to return the land from which the rockets will be fired, which will be invaded, which will be given back... for peace.

And Israeli houses endanger this cycle of peace and violence. They endanger it by creating "facts on the ground", a piquant phrase that only seems to apply to houses with Jews. Muslim houses in no way create facts on the ground, even though they are built out of the same material and filled with people. Or perhaps they create the good kind of facts on the ground. The kind of preemption of negotiations that the professional peacemakers approve of.

But it's hard to know what exactly the peacemakers approve of, because their arguments and their definitions keep changing all the time. All that we know is that they disapprove of Israeli houses.

The United States repeatedly assured Israel that Jerusalem would in no way be endangered by the peace process. No less a personality than Joseph Robinette Biden Jr. co-sponsored three Senate resolutions urging that Jerusalem should remain Israel's undivided capital. Then like all good politicians, he was horribly offended when the Israelis actually took him at his word.

Obama gave an election speech four years ago where he declared that Jerusalem should be undivided. A day later he explained that he meant "undivided" in some spiritual sense that did not preclude it from actually being divided. 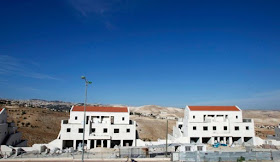 The army of lethal Israeli houses, which may not be built for another five years, if ever, seem formidable in the black newsprint of the New York Times, in the fulminations of Guardian columnists and the shrill talkingpointation of CNN talking heads, but its actual potency is limited to housing Jewish families and infuriating international diplomats and their media coathangers.

Europe is furious, Obama is seething, the UN is energized, and somewhere in Tehran, Mahmoud Ahmadinejad wipes the grease out of his mustache and wonders what he could do to get this much attention. He briefly scribbles down some thoughts on a napkin but then dismisses it as being too implausible. As much as it might get the world's attention, there is just no way Iran can put up apartment buildings in Jerusalem.
Daniel Greenfield at December 04, 2012
Share