New York City's Mayor Bloomberg seems to have a new exit strategy. After trying to spread rumors that suggested he might run for President, in the hopes that one party or the other would give him the V.P. spot, failing and struggling through a third mayoral election that he promised would never happen against a candidate who never bothered to show up and still almost beat him, Bloomberg needs a way out. 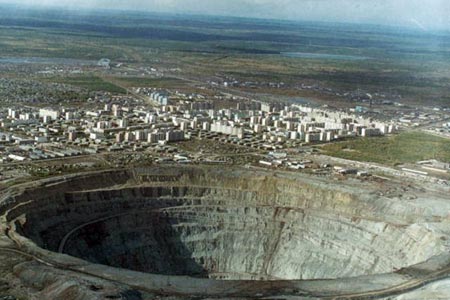 Sure he's done a fine job amusing himself by scattering modern art atrocities painted day glo colors on the city hall lawn. He's made Manhattan impassable for traffic, after Albany shot him down on his commuter tax. But waging a war on good taste and cars just isn't enough. Nor is enthusiastically backing the Ground Zero mosque, spending ridiculous amounts of money overhauling basic city infrastructure like bus stations and firehouses to meet with his idea of architectural standards (transparent and on an angle usually). Now it's immigration reform.

Bloomberg has announced the Partnership for a New American Economy, which is a fancy way of saying that he'd like to legalize a whole lot of Mexican illegal aliens which will somehow lead to a "New American Economy", which is good because anything "new" must be better than old. Like New Coke. Or New Strain of Diphtheria. Or New Kids on the Block. Joining him are a bunch of CEO's, including Rupert Murdoch.

It's not exactly a big secret that the are two reasons we have open borders. The first reason is the Democratic party's reliance on importing dependent minority groups to build a voting base. The second reason is that the Republican party spends too much time answering to corporations who want open borders. The Chamber of Commerce is a big proponent of open borders, which makes Bloomberg's collection of CEO's from Disney (does the Mouse really need migrant workers?), Marriot, Hewlett Packard, Boeing, American Express, Morgan Stanley and the New York Times (migrants could probably do a better and cheaper job of writing their articles) and Rupert Murdoch of Newscorp.

DOOCY: The country is so gridlocked around this. What can business do that Washington, DC has not been effective in doing so far?

MURDOCH: Well you just gotta keep the pressure on the congressmen. You gotta do it on the press and on the television. It’s a political thing. They gotta fess up to it. [...] You gotta recognize that there are millions of bright and intelligent people around the world — whether they are in China or in Hungary or in Germany or something — who want to come to America and live the American Dream.

DOOCY: Right, but they can’t. [...] This is a political hot potato. How do get past the partisanship that is out there and is so biting for a while?

MURDOCH: I think we can show to the public the benefit of having migrants and the jobs that go with them.

So we're once again talking about major corporations lobbying congress to ignore the will of the people.

But Murdoch completely sidesteps the fact that importing migrant workers does not mean importing "bright and intelligent people", it means importing people to do bad and cheap labor, so companies can cut labor costs and pass them on to the taxpayer funding the social services for the migrants. That's already the situation that exists today.

I'm all for importing millions of bright and intelligent people, though perhaps not during a major recession. But that's not what either Democrats or Republican big business advocates want. What they want are cheap and easy people, who can be exploited on the job and at the voting booth. That's why immigration quotas look the way they do. That's why it's much easier for people from the Third World to move here, than for Europeans.

Immigration "reform" has become a euphemism for open borders with Mexico. And you only need one look at some of what's going on in Mexico and now in border states to see why that's a bad idea. This doesn't bother CEO's who live in gated communities, get driven to work in limousines and think they're immune from the problem. Whose exposure to Mexico is through high end resorts and servile waiting staffs who are happy to have a job. And that's exactly the culture they think they're bringing to America. Cheap labor catering to their whims. They have no idea what reality is, and they don't care.

"Immigrants have always been an essential part of America's economic strength," said Mayor Bloomberg. "This coalition was formed to change our current immigration policy, which is undermining our economy and threatening our status as the world's leading power. Too many innovative new companies, and the jobs they create, are being formed overseas because entrepreneurs can't get a green card to start them here. We need to break the legislative stalemate that has taken over Congress if we want the U.S. to remain competitive in the 21st century."

Again Bloomberg, like Murdoch conflates HB1 type workers (which is another issue) with what he's actually proposing, which is the legalization of illegal aliens. We don't have a lot of illegal aliens holding down those kinds of jobs.

And America has booming immigration numbers, yet somehow corporations are still outsourcing. Now with huge unemployment figures, are employers really leaving America because they can't find workers? Is it because we're denying citizenship to some sort of specialists that can only be found abroad? That's not the reality of the situation. 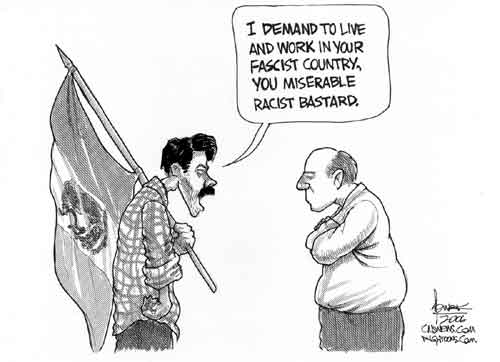 Corporations outsource because of the regulatory environment in the US, which applies high taxes and minimum wages. You don't need a large human resources staff in China. You don't need to pay them more than a fraction of what they're paid in the US. You don't even need to care if they kill themselves.

While yuppies crowd into lines to be the first to get the latest iPhones, those phones are made by Foxconn workers, hundreds of thousands of migrants, crowded into dormitories, subjected to regulations that would not even pass muster in an American prison, who were being paid around 135 dollars a month. Pressure on Apple and Foxconn has doubled salary. Which just means that sooner or later, Apple will move on to a country with even cheaper labor. This is likely to happen once China becomes middle class and workers get used to a base salary and some expectations of how they should be treated.

This already happened in America. And the only place the clock is turned back is around illegal aliens. Which is exactly why businesses love them. But then they demand that the government legalize them and take them off their hands. And then more illegal aliens are brought in to replace them.

Some corporations are just looking to squash competition from companies that do employ illegal aliens. Others genuinely believe this is some kind of solution, which means that they are completely in denial.

For the mayors the payoff is obvious. Legalization means more federal social services dollars and more voters come election day, to shoulder aside those pesky natives who don't want to pay more taxes or see their city implode. As corporations pass the cost to the cities, the cities want to pass the cost to the Federal government, while benefiting from ladling out federal money to supporters in ethnic communities, who return the favor by voting for them. Game, set and match.

But none of this is good for the economy. Even if we ignore the social issues, this is hardly the time to promote more unemployment or government spending. Bloomberg and the CEO's are doing the Obama Administration a favor, and I wouldn't be too surprised if this Partnership for a New American Economy was even solicited by the White House. But their contempt for what the voters actually want is truly stunning.

The marketplace does not reward this strange combination of workplace regulation and immigration deregulation. It's like pouring water through a blocked hose. All you're going to do is break the hose. That's what has been happening to the American economy, as businesses import cheap labor in a system where cheap labor is illegal. That has driven the growth of illegal labor and off the books jobs in ethnic communities. But all that means is people using the system's social services, without paying into it. Immigration "reform" advocates argue that legalization will fix this by having them pay into the system. What they ignore is the fact that the only reason they're viable, is because they're economically viable is because they're not paying into the system.

Outsourcing and companies departing for climes with cheaper labor will continue. There may not be much we can do about it, besides applying tariffs, a notion that would give those same CEO's fits. But unless we can either automate more efficiently, block cheaper products or educate and organize people that buying more expensive but better made products is the thing to do-- the same process will continue.

But pushing legalization will accomplish nothing except to help drown the middle class. The south relied on slave labor, which created a wider gap between those on the top and on the bottom. The north relied on immigrant labor in its factories. Some of those immigrants were treated almost as badly as the slaves, but they did have enough mobility to be able to move up or to have their children and grandchildren move up into the middle class. But that same process can no longer work, when the middle class is being taxed to subsidize a dependent lifestyle for the people on the bottom. As a result those in the middle are sinking and those on the bottom have no real incentive to rise. If they want consumer products, there are credit cards. If they want homes, the government will subsidize their mortgage. 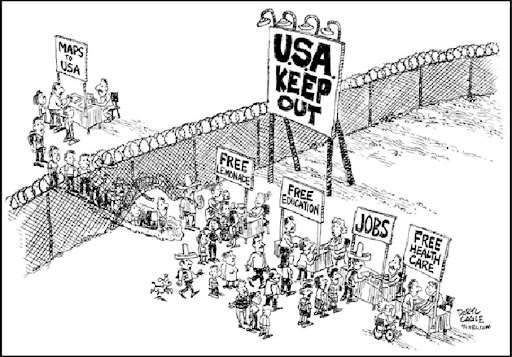 Governments and corporations are drowning the middle class in reckless spending. The bill keeps being passed along. Illegal immigration is just one snapshot of a much bigger problem, which is the end of responsibility. Where leaders once thought generations ahead, now they hardly think a year ahead. And the mountain of debt rises. Problems aren't fixed anymore, they're perpetuated and labeled as wise policies. Money is spent and the bill is passed, and then it's passed again and again. Until the system breaks down, and then the bill is passed to someone else. Until finally something that is too big to fail, actually does fail, and there's no one bigger around to bail it out.

Real leadership requires recognizing the nature of a problem, and to understand both the positive and negative consequences of every proposed solution. Illegal immigration for cheap labor is the dark side of an American Dream achieved through regulating business. Legalization is as pointless as pointing to a factory's polluted groundwater runoff and talking up its benefits. It redefines the problem and ignores its negative consequences. That is not leadership. That is spin. And we're drowning in it.

For the Republican party to get serious about stopping illegal immigration, it needs to take a long hard look at big business, and have a serious dialogue with them about the tax based consequences to their own companies of increased social services spending. And for the Republican party to get serious, conservatives need to actually take a hard line on it, instead of letting the Chamber of Commerce and the CATO Institute have the inside track. Because the road we're going on now has a station coming up, and it's called Europe. We're not there yet, but we're getting there. And when we get there, we'll cease to have a functional economy altogether. All we've have are entitlements, subsidies and a half-forgotten dream of former glory.
Daniel Greenfield at June 26, 2010
Share