One of the more stunning bits of insanity to come out of 2008 is that during an economic crisis caused by "Buy Now, Pay Later" fiscal planning, a candidate whose entire economic philosophy was built on "Buy Now, Pay Later" was voted in. The difference is that Obama's "Buy Now, Pay Later" plans weren't there for capitalism, but to fund socialism. And now with the national debt tripled, and his approval rating lower than a skunk's at an aromatherapy session, he's pushing out ObamaCare's "benefits" ahead of schedule. Still Buy Now, Pay Later. 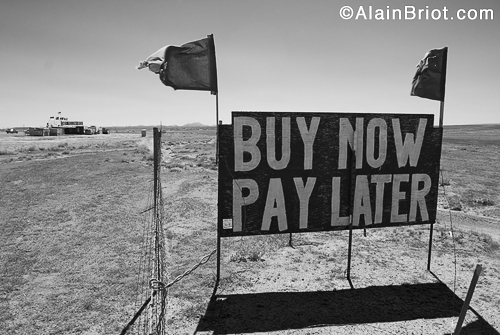 Buy Now, Pay Later had already done a stunning job of undermining the basic financial competence of large numbers of Americans over the years. What had been a country where people understood the value of saving money, because a country of consumers who were talked into running up credit card debts and taking out loans they couldn't afford. But this was a mirror image of what they saw happening in government at every level, with their leaders spending money non-stop, without any serious thought of when the bill would come due. Companies not only seduced customers into abandoning common sense, but they threw their own financial accountability overboard. Debt became Detroit's real commodity, not steel or muscle cars. Debt became Wall Street's best investment. And as the national debt grew, debt also became America's biggest export to China.

And while liberals continue preaching against the sins of Wall Street, they display a flagrant hypocrisy in ignoring the fact that their own policies are based on even worse financial planning. Furthermore major industries now assume as a given that if they're too big to fail, then they can make whatever missteps they like, and Johnny Taxpayer will be there to bail them out if it all comes crashing down around them. Buy Now. Pay Later. Keep passing the buck and forwarding the bill, without any real thought of who's going to pay for it all. Now the world economy is tottering because so much of it turned out to be a fraud, which in turn is being held up by the fear that if any part of it collapses, so much more of the fraud will become apparent, bringing it all crashing down.

And so the US government spends like mad and sells the debt to China, which buys it with the proceeds of its own giant financial scamming, and is now terrified that our house of cards will bring their house of cards down. Europe bails out Greece to protect the Euro, whose collapse would expose the house of cards of the EU. The US intervenes to help save the Euro with more taxpayer money which is added to more debt which is sold to China, which hopes the whole wobbly mess will be righted before Dubai's own royalist house of cards goes down for good. The big achievement of Globalization is that now everyone is too big to fail, so we all have to keep passing the monopoly money around the world table as part of a consensus in which everyone pretends to believe everyone else's lies, if they believe theirs. The sheer scope of it makes Madoff look like a shoeshine boy pinching nickels. 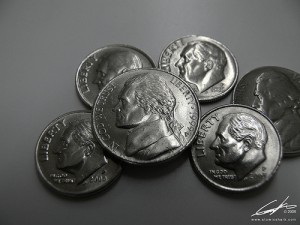 And the only way to play at every level of this three-ring circus is to keep spending money. If you assign imaginary values to counters in a global pyramid scheme, you have to constantly keep moving more of the counters to keep up the charade. And that means spending money. From the consumer loading up three credit cards to the big developer borrowing hundreds of millions to spend on a grandiose project to a company with no business plan making a public offering of overvalued shares to the government announcing another huge spending package-- the counters always have to stay in motion. And someone else always has to get the bill. Until everyone realizes that there's no money and no one to take the bill.

That hasn't happened yet, but sooner or later it will. What we think of an economy is actually a tremendously persuasive scam built on maintaining a buzz of activity, but creating no actual value. And people like George Soros who understand that there is nothing beneath the economy but a tissue of mutual deceptions, have profited enormously from their financial terrorism. From causing limited financial catastrophes in the knowledge that everyone else will have to limit the fallout, while pushing to centralize economies further on the "The Bigger They Are, The More Profit There Is In Toppling Them Over" scheme of piratical rewards. Because socialism can be profitable, so long as you set it up and then bet against it. Meanwhile liberal court jester economists like Paul Krugman who put his Enron experience to good use, by encouraging politicians to think that non-stop debt based spending is actually more beneficial than cutting back on spending. And the genuinely terrifying thing, is that like medieval witchhunters, they probably even believe what they're saying.

What all this adds up to is socialism. Since once a government becomes the financial reservoir for its country's businesses, the end result is that the companies will use it as a safety net, passing along its own failures, while the government attempts to control the economy-- resulting in a government run economy. Which naturally makes them into an even bigger target for financial terrorism and economic hit men. Because there is no such thing as too big to fail. Everything can fail. It just fails bigger. And the bigger it fails, the more it takes down in its wake.

The more an economy runs through the government, the more vulnerable both government and economy are due to their intertwined state. Government authority feeds corruption and waste, opening the door to a cycle of diminishing returns in which more centralization produces less product and profit, which when combined with a Culture of Entitlement can leave a formerly productive country looking like the USSR. But that very same culture also seduces citizens with Buy Now, Pay Later. Entitlement builds hidden debts, which are passed along from generation to generation, until the interest outweighs the principal. Until the debt itself becomes an asset. Until everyone realizes that the emperor has no clothes. 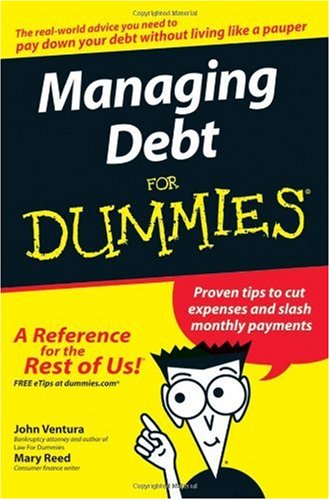 Socialism competes with capitalism for resources. Its philosophy demands that people invest in a government that will take care of them, rather than in pursuing their own economic destiny. Put the American Dream on the shelf and say hello to the Nanny State. That's the general idea here. But Buy Now Pay Later Capitalism and Buy Now Pay Later Socialism are partners in passing the torch from the former to the latter. Authentic free enterprise is built on hard work. Buy Now, Pay Later Capitalism however sold people on the idea that they could buy now, and pay whenever. Entire advertising campaigns were built on luring people into piling up debt. Banks began banking on the financial incompetence of their customers, turning penalty fees into their major revenue source. Debt was resold. Detroit began selling credit instead of cars. And all that debt had to stop somewhere. And that somewhere was always the government.

Where the America of generations past understood that there was no free lunch, a new America forgot that fundamental lesson and began putting it all on a card. And from the individual shopper to the halls of the United States Congress, that became the way it was done. War or no war. Recession or prosperity. Rain or shine. It didn't matter anymore. And thus began the era of the world's most expensive free lunch. Liberals offered free entitlements with very huge back end price tags that had to be paid in taxes. Free this and free that. All of it more Buy Now, Pay Later.

Now the huge cost of putting Obama where he sits has to be paid for with the biggest Buy Now/ Pay Later package that Americans have ever seen. Socialism in all its sordid glory. Free everything that you and your children's children will have to pay for through the nose. Bailouts and takeovers. Rivers of regulation, all formulated to benefit the regulators, not the regulated. Enough people have woken up to the lies. Enough families recognize that their children will be in debt for generations to pay off just the debt that has already been accumulated. And despite all the calls of "Don't Worry" and "The Experts are on the Case", they're worried and they're angry. Because buying socialism now, means we'll have to keep paying for it forever.
Daniel Greenfield at May 26, 2010
Share