The first and most important thing to understand about Obama's Iran policy is that it is driven primarily by the concerns of Saudi Arabia, not Israel, as the media and diplomats would have you believe. 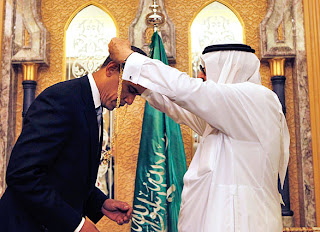 While Israel is most visibly in Iran's nuclear sights, it is commonly understood in the Middle East that the path to leadership of the Arab, and by extension Muslim world, lies through the destruction of Israel. The consensus of the Sunni Muslim powers, who had lost several wars to Israel, was to limit themselves to proxy wars through the sponsorship of terrorists such as the PLO.

In essence like Obama, Sunni Muslims had committed themselves to the use of "Soft Power" against Israel, backing terrorists who would murder Israelis and use them as leverage to force concessions from the Israeli government. Iran's Shiite Muslim regime however has not only hijacked the terrorist strategy, sidelining the PLO and backing Hamas instead, but its aggressive development of a nuclear bomb rapidly approaches an endgame for the region.

The Sunni Muslim powers who had committed to avoiding any direct confrontation with Israel face the unpleasant prospect of being sidelined and humiliated by a Shiite Muslim victory over Israel. Should Iran succeed in destroying Israel, the Saudi royal family understands that their brief celebration would quickly give way to falling under Iranian dominion... because this would confirm Iran's role as the regional leader and demonstrate American impotence. No American administration, no matter how much it might be in the Saudi's back pocket, would go to war with a nuclear armed Iran that had already demonstrated a willingness to kill millions to protect the Saudi royal family.

And while attacking Israel to get to Mecca might seem convoluted, it is worth remembering that Al Queda attacked America in order to get at the Saudi royal family. Muslim holy wars that are fought against other Muslims are often indirect. Hamas spent a generation fighting Israel before finally making a move against Fatah. Osama bin Laden attacked America in order to rally the Jihadis for a power bid in the Middle East. Sunnis and Shiites fighting each other in Iraq repeatedly insist that they are really fighting against the United States. When Saddam wanted to legitimize his seizure of Kuwait against US intervention, he began bombing Israel.

One of the delusions that Muslims hold dear is that their beloved Jihadis do not kill fellow Muslims, except as a means of killing infidels or pawns of the infidels. This naturally structures Muslim holy wars in a way that kills far more infidels than Muslims, which is why just like a dog fight, it is more dangerous to be in the vicinity of a Muslim civil war, than anywhere else. And the Sunni powers in the Middle East understand that when Ahmadinejad talks about destroying Israel, he only means destroying Israel first, and them second. They also understand that Ahmadinejad is a convenient foil, a pronounced madman who can be allowed to deploy and use nuclear weapons, only to then be removed from power by more "responsible" Iranian authorities, who will naturally include at least some of the parties involved in the election protests.

The Saudi royal family understands that Israel is not the endgame, they are. And the Saudis hold a good deal of sway in the Obama administration, through economic and political ties, and through family ties. The Saudis are the guardians of Mecca and Sunni Islam. Obama's Muslim family is Sunni, and while he has paid tribute to Sunni Islamic institutions such as Cairo's Al Azhar University, he has not done so for Shiite institutions. His Muslim ties are of the Sunni variety. Nearly as important, key foreign policy voices in his administration, particularly National Security Advisor James L. Jones are Saudi affiliated. That is why Obama is following a policy somewhat more complicated than the natural inclination of many of his left wing advisors to simply give Iran a blank check for whatever it wants to do. 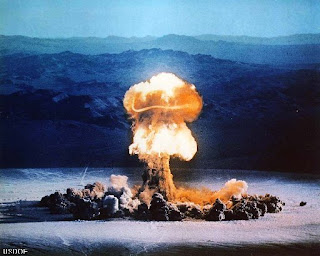 The Iranian situation has put the Saudi royal family in a very tricky position. It would like to see the Iranian nuclear threat defused, but without war or any democratization or regional political instability that might rebound back in Riyadh. As much as Saudi Arabia fears growing regional Shiite influence, it fears growing regional democratization even more. If protesters succeed in democratizing the home of the Mullahs, the House of Saud knows they might be next. Regime change through popular protests are the nightmare scenario of just about every Middle Eastern dictatorship. But the other options are no less pleasing.

If the House of Saud could be sure that an Israeli-Iranian war would end with the annihilation of both countries, they would be all for it. But instead they fear that a surprise attack would destroy one side, but leave the other intact. Nuclear fallout drifting across the Persian Gulf is not their ideal scenario, but if Israel is destroyed by a nuclear Iran, then the Gulf States have nowhere to run.

The Saudis are natural cowards living off stolen oil companies and agile at finding other people to do the fighting for them and take the blame for it too. The Gulf War was the Saudis at their best, using the US to fend off Saddam, keeping everything in the status quo when the fighting was done, and making sure Israel took the blame for the whole mess... even though Israel's only role in the whole thing was to be a target for Saddam's rockets. The Saudi idea of a happy ending saw two of their enemies get neutered but not destroyed, the status quo of power relationships remain the same, and dead US soldiers and Israeli civilians get shoveled under after being killed as part of a conflict between two Arab Socialist and Islamist dictatorships.

Operation Iraqi Freedom however was exactly what the Saudis did not want. Democracy in their back yard, regime change and regional instability. But 9/11 had weakened the usual gang of Saudi apologists who had exhausted their political influence arguing that the US should give negotiations with the Taliban some more time. Once the occupation of Iraq began to falter, the same old hacks however won new credibility. Obama's new policies were their policies with an emphasis on soft power, engagement and appeasement. Delaying tactics that got US troops killed while accomplishing very little except to maintain a status quo. 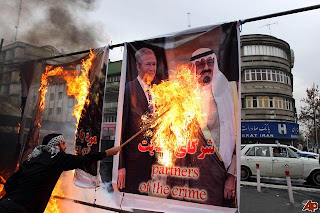 But Iran represents a thornier problem. The Saudis would like to see Iran defanged and its rising regional influence thwarted. Preferably through soft power and negotiations, but the possibility of a military strike cannot be completely ruled out either. US military intervention is nothing something the Saudis want, except as a checkmate. Osama's attack on the United States in the aftermath highlighted the weaknesses of the House of Saud's policy of relying on America for protection. Every time the Saudis call on the US for help, they must rebuild their credibility by boosting their promotion of terrorism and Islamism abroad, which in turn runs the risk of US military intervention hitting too close to home. 9/11 was the result of such a terrorist feedback loop. The Saudis do not want to repeat the experiment, but their inability to militarily confront Iran, leaves them with the choice of relying on either the US or on Israel.

Back door agreements have already been discussed by Israel with the Gulf States for permission to overfly their territories on a bombing raid of Iran's nuclear reactors. The convenience of using Israel to do their dirty work is that this sort of secret alliance is easy to disavow. There are no Israeli troops erecting bases on Muslim "holy soil" or other inconvenient figments of an infidel presence. Shiites and even some Sunni Islamists will hurl the usual accusations, but the House of Saud has a sterling record of backing terrorism against Israel. The rabid torrent of hate aimed at Israel has a major wellspring in Saudi Arabia, and such accusations will be difficult to sustain.

On the other hand the call of Islam pushes the Saudis to wish that the pesky Israeli problem were gone. The slow approach Saudi Arabia has favored might achieve that goal in a few decades, but there are those who would like to see it happen now. And like most cowards, the House of Saud is always confident that a back door will appear at the last minute that will let them escape the problem at the last minute. That back door of course is the United States.

If the United States moves against Iran in a way that is visibly tied to Israel, the Saudis might find themselves free from accusations of collaborating with the infidels against fellow Muslims. On the other hand the Saudis depend too much on the United States to be able to completely escape condemnation. Furthermore Americans, to the Saudis, have a way of being unpredictable. The Saudis liked the original Gulf War, but Operation Iraqi Freedom terrified them badly. The Saudis have subverted a sizable portion of Washington D.C., not to mention Brussels, but for all that they don't really understand Westerners who lack the same tribal loyalties and mercantile cunning that define Saudi diplomacy. Obama was meant to tame America, to make it safer and more controllable. Less threatening.

The Saudis need Obama to prevent Iran from being a danger to them. Bolstering his image among Muslims and generating the idea of America as a Muslim country is a key asset in their domestic PR campaign. When Islamists took over the Grand Mosque in Mecca, the Saudis avoided confronting them directly, instead they brought in French Commandos, who were obligated to first convert to Islam, before storming the mosque. 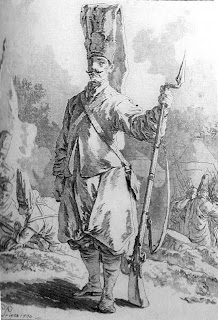 Today the Saudis still need infidels to do their dirty work for them, and they need them to first submit to Islam. Obama fulfills both functions for the Saudis, delivering an Islamized America ready and willing to promote the "Soft Power" agenda of the Saudis. This is far from unprecedented in Muslim history. The Ottoman Empire replaced the Ghazis, the holy warriors who dated back to Mohammed, with Janissary troops, Christian slaves fighting under the command of Muslim rulers and clerics. Americans are meant to be the new "Door Slaves" of the House of Saud, as they were in the Gulf War, protecting their grip on oil and power.

Obama is dithering on Iran, because the Saudis are dithering on Iran. The House of Saud has a variety of unpleasant options to choose from, so for the moment they are playing the "Soft Power" game, hoping that Iran can be neutered without any conflict or regime being involved. They don't want democratization, which is why Obama sold out the student protesters. They don't really want an Israeli strike, but aren't willing to close the door to it either-- which is the policy Obama has followed. They don't want an American strike, and if it has to happen they want to make sure it isn't associated with them, which is also a policy that Obama has followed. And as long as the House of Saud is allowed to call the shots in Washington D.C., there will be no policy out of Washington D.C, that isn't first run by the Saudi royal family.
Daniel Greenfield at October 11, 2009
Share