An Era of Bad Faith Ends

Generation Xers mourning Stewart’s departure ought to be thanking the man who made the awkward comedian’s long tenure of pulling faces while making snide remarks possible; President Bush. 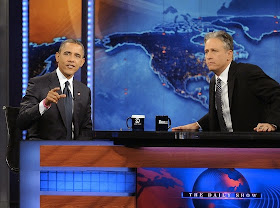 George W. Bush made Jon Stewart. Even Stewart has admitted that his show came into its own when Bush did. A world in which a President Gore spent eight years sonorously lecturing Americans about his love for the trees is also a world in which Jon Stewart would be out there doing pizza commercials.

It was Bush’s victory that took a flailing cable show hosted by an irritating little standup comedian with more neurotic tics than a flea-bitten Woody Allen and turned him into the voice of liberalism. Stewart’s nervous smirk and his passive aggressive mockery became the zeitgeist of urban Democrats nervously responding to Bush’s popularity and the rise of American patriotism after September 11.

The Democratic Party was out of ideas. The politicians who would become some of Bush’s most fevered critics were still following the president’s cues. A newly serious America was confronting a world war.

Stewart’s disingenuousness, veering from ironic detachment to self-righteous hectoring, undermined real sincerity with fake sincerity. The Daily Show’s audience of hipster yuppies cheered their newfound faith in sincere cynicism while the calculated ironic distance of his comedy kept him safe from critics. Even while he attacked the media’s dishonesty, his own routine was the most dishonest of them all.

His fake news was real news, biased and spun with punch lines. It was fake news that was real and just as fake as the rest of the news. The truth was that the lie was still a lie.

What Stewart offered a party dragged down by a morose Gore and Kerry was the promise of cool. Their former figurehead had started out playing the saxophone on the Arsenio Hall Show only to decay into a bloated red-faced mess. With towers burning and wars rising, Stewart was to be their bridge to a cooler and younger 21st century that an aging Democratic Party no longer seemed able to grapple with.

Jon Stewart didn’t actually have cool, but he could offer it up inversely by way of mockery. Like a school paper’s drama critic, he might not be cool, but by railing against others, he could deny coolness to them.

Stewart wasn’t funny and knew little about politics. Unqualified to be in politics, journalism or even comedy, he straddled the line by casting himself as a critic of the media and politics. In his new role, he just had to be funny by the standards of politics and politically knowledge by the standard of comedians. It was a low bar that he just managed to limbo under. All he had to was to go after the right targets.

Audiences in retro glasses clapped like electroshocked seals at his every grimace and the media declared that his fake news was what real news should be. And worst of all, they meant it.

The media found Stewart refreshing not because he kept them honest, but because he encouraged their worst partisan instincts for dishonesty. The news anchors at their desks wished that they could say the things that he said. And some of them began to say them. Today the line has blurred so much that NBC News was thinking of offering Stewart a gig on Meet the Press. 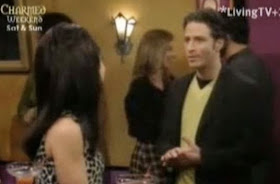 While Bush may have made Stewart, Jon Stewart then made Obama. Barack Obama was a political version of Jon Stewart; a dishonest entertainer turning politics into a joke and then faking a theatrical sincerity while throwing out every possible distraction to cover up his dishonesty and bad faith.

Stewart provided a counterpoint to Bush’s real sincerity with fake sincerity. It was a joke that Stephen Colbert would polish into a single mindless routine. The flip side of the routine was that flippancy equaled sincerity. If the sincerity of patriotism and the devoutness of faith were a joke, then anyone who was joking was bound to be sincere. Those were the clown shoes to be filled by hope and change.

Obama’s fake self-awareness made him seem authentic in a social media society composed of reflective levels of personality. What Stewart offered Democrats was an evasive viewpoint without accountability. And nothing quite appeals to the cowardly instincts of a political hack like being able to take a political position without being held accountable for it. But it was Obama who truly embraced politics without accountability, transforming every issue into a joke or referencing it back to his own biography.

While he may have come out on the stage with a unique personal story, what kept Obama competitive was his skill at refracting everything through layers of irony and self-awareness. His approach was to borrow Stewart’s own routine without any of its ambiguity. Stewart’s pretense of triangulation became Obama’s obsession with turning his radical left-wing politics into an imaginary middle ground.

Stewart and Obama had come out of a political movement trying to respond to September 11 without having the first idea how to do so. Stewart’s comedy paved the way for minimizing the threat while inflating the absurdity of those trying to fight it. It is an approach that Obama continues to embrace.

Both men have pretended that they aren’t ideologues. They have acted as if the left is a third way, rather than the same old way, selling that dishonest message through style, not substance.

Jon Stewart did not offer an alternative to the media. He was what the media was becoming. The merging of opinion and reporting along with the overlay of cynical humor over every story have become ubiquitous. Stewart didn’t pave the way for a better media. He paved the way for Buzzfeed, Vice, Politico and Vox. He turned the news into a joke with an agenda… which is exactly what it is now. 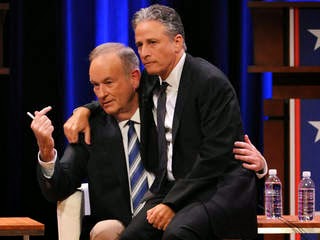 Obama was an equally fake alternative. He didn’t offer inspiration, but manipulation. His new ideas were the same old ideas packaged around his personality, around new styles and designs fed through social media and media appearances. Unwilling to connect with opponents, reporters and even voters, he then settled for digging in on his grievances and breaking the rules by ruling the country unilaterally.

Generation X cynicism fused with millennial brand awareness to create a political monster who might not be able to lie to the people all the time, but who cynically made the existence of his lies irrelevant.

Stewart’s Daily Show had offered an antidote to the Bush era of patriotism, sincerity and decency. Its antidote was passive aggressive ridicule and political satire as sincerity. After the Bush era ended, Stewart and his fellow comedians had little left to do except take on the job of defending Obama, while occasionally critiquing him. They had become the official court jesters of the Democratic Party.

It’s no wonder that Stephen Colbert and Jon Stewart, anticipating eight more years of Hillary, have chosen to move on. The genre has long since outlived its original response to 9/11 sincerity. It now exists only to feed on itself. To act as a comedic Media Matters churning out viral videos slamming opponents for some sin against the left while pretending to be part of mainstream consensus.

Jon Stewart gave us the era of Obama. As that era of bad faith comes to a close, so does his own.
Daniel Greenfield at February 12, 2015
Share