A Revisionist Muslim History of America

Turkish President Erdogan’s claim that Columbus encountered a mosque in Cuba (the explorer actually saw a rock whose shape he compared to the dome of a mosque) and a Saudi Imam claiming that Columbus had sailed to America to attack Muslims are typical of an emerging genre of Muslim revisionist history that lays claim to America based on an imaginary earlier Muslim presence here. 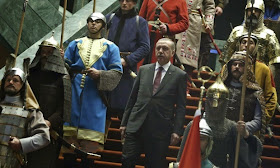 While these examples may be laughable, Muslim historical revisionism has taken root in academia. It can be found in PBS broadcasts and in a recent New York Times piece.

In the New York Times, Peter Manseau asserts that, “There is an inconvenient footnote to the assertion that Islam is anti-American: Muslims arrived here before the founding of the United States — not just a few, but thousands.”

The description of Islam as anti-American has nothing to do with the Muslim date of arrival. Instead it refers to Islam’s theocratic erosion of the line between mosque and state, its theological doctrines of violence against non-Muslims and women, as well as the belief of a succession of killers crying “Allahu Akbar” that they can achieve a paradise full of virgins by killing Americans. The Muslims who had the biggest influence on the United States were nineteen men who boarded planes on September 11.

But Manseau goes on to offer up three examples of Muslims in the early days of the United States.

“In 1528, a Moroccan slave called Estevanico was shipwrecked along with a band of Spanish explorers near the future city of Galveston, Tex. The city of Azemmour, in which he was raised, had been a Muslim stronghold against European invasion until it fell during his youth. While given a Christian name after his enslavement, he eventually escaped his Christian captors and set off on his own through much of the Southwest.”

Manseau neglects to mention that Estevanico or Esteban de Dorantes was African, not Arab. Morocco was a major slave market and Africans in Morocco today are still often taunted as slaves. If Estevanico was ever Muslim, it was because he or his ancestors had been enslaved and converted to Islam.

And Manseau’s history only gets worse.

Estevanico didn’t escape his masters. He set out as a scout for them. He did disobey them by resuming a faith healing routine that began during an earlier journey in which he along with some members of his expedition claimed to be a “Son of the Sun” and cured diseases with the sign of the cross.

It’s hard to think of a less Islamic form of behavior.

During his expedition, Estevanico pretended to be a shaman, gathered followers, including a harem, and demanded turquoise and women from the local Indians in exchange for magical healing. Meanwhile he sent back crosses of different sizes to his Spanish masters to show them the most promising Indian villages. Eventually he reached the Zuni who killed him for, in some accounts, wearing offensive shamanic clothing from other tribes or for demanding women from them.

Zuni accounts claim that he molested their women. A similar report comes from Coronado who said that, "The Indians say that they killed him here because the Indians of Chichiticale said that he was a bad man and not like the Christians who never killed women, and he killed them, and because he assaulted their women, whom the Indians love better than themselves."

Black nationalists tried to make a hero out of Estevanico, but he makes a remarkably poor hero. He was a scam artist exploiting the native population, aiding the Spaniards and abusing women along the way. Some of this makes him a tolerably passing Muslim, but there is no real evidence that he was a Muslim aside from his land of origin. At times he appears to have practiced Christianity and later adopted the persona of an Indian shaman. Manseau tries to put the best face possible on his history but deceives readers in much the same way that his hero deceived the native population.

But Manseau’s next “Muslim” hero is if anything even worse than Estevanico. 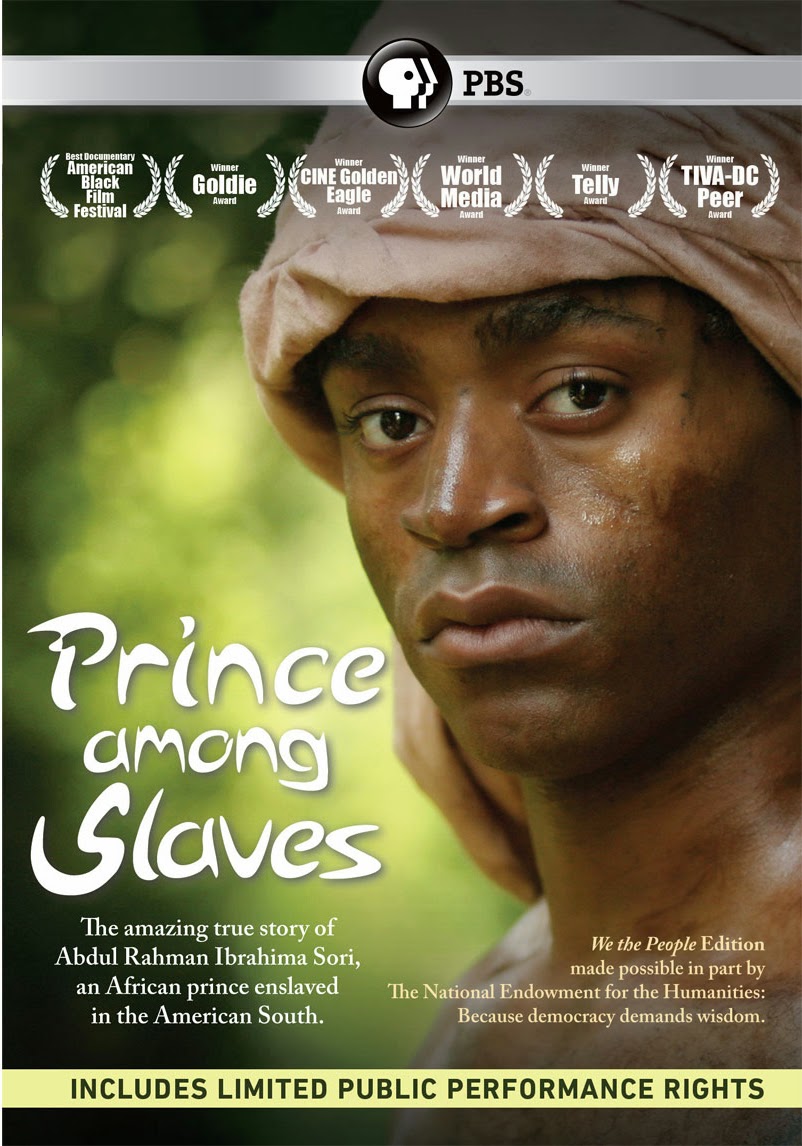 “The best known Muslim to pass through the port at New Orleans was Abdul-Rahman Ibrahim ibn Sori, a prince in his homeland whose plight drew wide attention. As one newspaper account noted, he had read the Bible and admired its precepts, but added, ‘His principal objections are that Christians do not follow them,’” Manseau writes.

This description once again leaves out quite a lot.

The so-called Prince Abdul Rahman Ibrahima Sori has been a major figure in Muslim revisionist history. He appeared in a PBS documentary which was targeted to black audiences. Unfortunately for them, Abdul Rahman was actually a racist who boasted that “not a drop of Negro blood runs in his veins. He places the Negro on a scale of being infinitely below the Moor.”

He was notorious for his abuse of slaves. A letter mentions that, “M. Foster actually made him manager of the plantation, had continually to keep an eye upon him and to curb his sanguinary temper to prevent him from exercising cruelty on his fellow servants.”

Abdul Rahman, by his own account, was a Muslim Moor sold into slavery by the Africans he had been attacking. He was a violent racist who despised Africans and abused the slaves under his power.

The parallel with Estevanico’s abuse of the native population is striking.

However much of what we know about Abdul Rahman came from his own mythmaking. It’s quite likely that he was never a prince of anything. Like Estevanico, he may have just been a talented con artist who was good at raising money by telling stories.

And during his grand tour of America, he promised to introduce Christianity to Africa.

As Muslim role models go, Abdul Rahman manages to be even worse than Estevanico. Manseau leaves all these details out because they change the narrative. Neither of his Muslim role models appears to have been particularly Muslim. Both casually dabbled in Christianity when it suited them.

But Manseau goes on. “Among the enslaved Muslims in North Carolina was a religious teacher named Omar ibn Said. Recaptured in 1810 after running away from a cruel master he called a kafir (an infidel), he became known for inscribing the walls of his jail cell with Arabic script. He wrote an account of his life in 1831, describing how in freedom he had loved to read the Quran, but in slavery his owners had converted him to Christianity.”

Manseau fails to mention that “Omar was regularly willing and able to reassure all visiting Christians that he was a true convert as he often wrote in Arabic what he called 'The Lord's Prayer' and the Twenty-Third Psalm.” Or “Prince Moro’s” eager wish that "Mohamedans may receive the gospel." Not to mention Omar’s autobiography in which he wrote that, “When I was a Mohammedan I prayed thus… But now I pray “Our Father”, etc., in the words of our Lord Jesus the Messiah.” 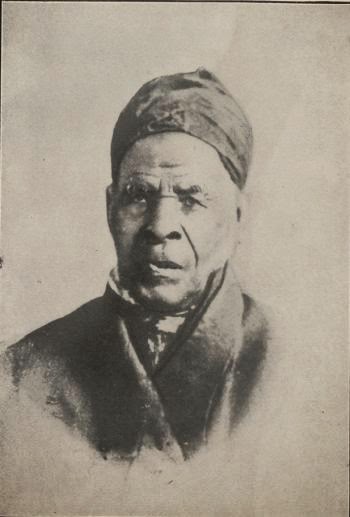 Manseau’s description of Omar’s autobiography is blatantly dishonest. As with Estevanico and Abdul Rahman, he has to leave out basic facts of the lives of these “Muslims” to accommodate his agenda. But Manseau is following in the footsteps of other revisionist historians who insisted that Omar’s copying of material from the Koran in an Arabic he had mostly forgotten proved his commitment to Islam.

The basic fact he has to leave out is that Omar described himself as a devout Christian. His other two “Muslims” consist of a man who promised to bring Christianity to Africa and another who played a shaman when he wasn’t making crosses.

The deceits of Peter Manseau and the New York Times, which never bothers fact checking even the wildest Muslim claims, are in their own way every bit as dishonest as Erdogan’s Cuban mosque. The difference is that they have the protective coloration of academia and journalism. Their dishonesty is more sedate and buried under protective layers of omissions and distortions.

Revisionist Muslim histories of America should be rejected, whether they come from Erdogan or the New York Times, because they are built on lies. And a history built on lies cannot stand.
Daniel Greenfield at February 16, 2015
Share