One of the reasons that Romney lost is that he failed to take on the media. The ultimate lost opportunity came when CNN’s debate moderator Candy Crowley directly inserted herself into the argument between Obama and Romney to declare her favorite right and Romney wrong. 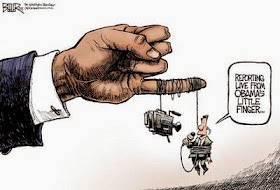 Romney had won the Republican primaries, but had failed to absorb the lesson of his most tenacious opponent. Newt Gingrich did not treat the media as a neutral moderator, but as a debate opponent, challenging its premises and agendas. And so Romney was left unprepared for Crowley’s attack.

On the road to 2016, the latest crop of candidates appears to have learned nothing from Romney’s failure. In response to the media blowing up his vaccine comment, Christie issued a sensible clarification that provided more fuel for the media narrative. And the media narrative is what most people know.

The media is using Christie to churn out stories framing the GOP race as a debate over vaccines while painting Republicans as opponents of vaccination. Media attacks on Republicans come in three stages. The first stage reports on an individual Republican’s action or statement. The second stage projects that on Republicans in general as part of a “Culture of X”. The third stage asks whether Republicans will ever be able to break free of the “Culture of X” with “X” being anything from racism to hatred of science.

By now we’re in the third stage. Republican opposition to vaccination has become a media meme.

In response, conservative blogs and outlets have shown that Obama and Hillary Clinton both linked vaccines to autism and that parents who don’t vaccinate tend to be wealthy Democrats.

But the media won’t report that unless the actual candidates stop debating vaccines and start using those facts to challenge its lies and hypocrisy.

A media smear campaign can’t be met with sensible clarifications. They only strengthen the smear. Christie’s clarification that he believes in measles vaccinations has allowed the media to begin spinning him as flip-flopping on vaccines. Any further statements explaining his views will be used to continue reporting on the manufactured story of the “Republican vaccine controversy.”

The only way to break the cycle is for Republicans to stop explaining themselves and to challenge the narrative. The narrative is a lie, but no one will ever know that if the candidates don’t challenge it.

Sensible clarifications might have worked in 1955. They might have even worked in 1985. But they’re completely useless today. No doubt the fact that Obama and Hillary were vaccine skeptics will be acknowledged somewhere near the bottom of a Washington Post fact check of a Hillary commercial that blames her opponent for spreading disease and killing children. Maybe as many as five people will read it.

Today’s media has less respect for the truth than an elevator full of con artists. As bad as it is most of the time, it gets worse during national campaigns when it begins manufacturing scandals and then reporting on them and then demanding that the candidates respond to its narratives as if they were real issues.

And Republicans keep falling for it

The road to the White House is over the crushed and mangled narratives of the media. A Republican candidate who fails to take on the media will fall wrapped head to toe in lies and scandals. He will go on issuing clarifications and sensible statements while the media accuses him of murdering small children. 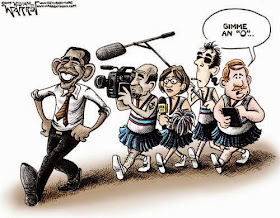 The media is not impartial. It is not even a forum. The national media is the political opponent of every Republican running for the White House.

It needs to be treated that way.

When CNN’s John King tried to drag Newt Gingrich through the dirt in a primary debate, Gingrich dragged the media through the dirt instead, describing it as “destructive”, “vicious” and “negative”. He turned the tables by putting the media and its motives up on the stage. He refused to treat John King as a journalist who had the right to hold him accountable. Instead he fought to hold King accountable.

And that’s something that any Republican candidate can do.

The public doesn’t like the media. Poll after poll shows that they don’t trust the media. They listen to what the media tells them because Republicans meekly play out their parts in the media’s smear campaigns the way that ISIS hostages do what they’re told even while their heads are being cut off.

The media would have been unable to move forward with the story without quoting the candidates, relegating the whole thing to the backwaters of the left in places like Salon and Slate. Instead the story is everywhere. And the only people who can kill it are the Republican targets of the smear campaign.

The media counts on Republicans playing defense. When Republicans go on the attack, when they challenge premises and the moral authority of the press, then phony scandals suddenly fizzle out.

Republicans wouldn’t roll over and play dead for their opponents. Why do they do it for the media?

Obama understood that being able to control your message and your brand is the most important element of modern politics. He shut out the media by using a small clique of influential friendly journalists for heavy interviews while doing light chats with everyone from YouTube celebrities to late night talk show hosts. He has his own photographer who distributes photos for the press to use. 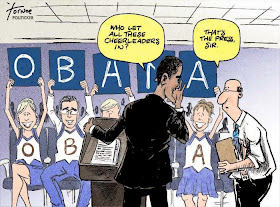 When there’s a controversy, the White House leaks an anonymous response. Its spokesmen divert and delay. They make fools of themselves to protect Obama. Their main goal is to deny the press a useable quote and they accomplish their real purpose of making the press briefings a waste of the press’ time.

If Obama distrusts and shuts out the press even though it licks his boots, why do Republicans play ball with it only to get a kick in the teeth?

The media was Obama’s messaging machine. It is becoming Hillary’s spin system. If Republicans passively submit to it, then the media will define them and 2016 will become a rerun of 2012.

2016 won’t just be a race against Hillary, but against the media. The media needs Republicans to tie the noose around their own necks by acknowledging the media’s credibility as investigators and reporters.

When Republicans provide the media with credibility, they lose.
Daniel Greenfield at February 09, 2015
Share