All Roads Lead to Cyprus

Cyprus is Europe's original failure. It was the first part of modern Europe to be invaded and colonized by Muslims, while its native Christian population was ethnically cleansed. Cyprus is to Islam what Czechoslovakia was to Nazism; the canary in the coal mine warning of worse things to come. 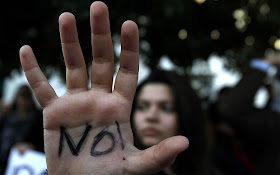 Now Cyprus has wound up in the middle of the European Union's meltdown as everyone scrambles to salvage what they can from an unsustainable system at the expense of everyone else. It's easy to look at what almost happened as another case of powerful elites abusing ordinary pensioners, but it's a good deal more complicated than that.

What we are actually seeing are the beginnings of bailout cannibalism as the Eurocrats manipulate entire nations into fighting each other while scrambling to gain some political advantage out of the mess. The real purpose of the deposit grab was to wreck Cyprus' banking sector and continue the centralization of international finance. At the same time it was meant to give German voters, who have been funding much of the mess, the feeling that other people were getting screwed as well.

Cyprus' government tried to salvage its banking sector by passing on the pain to ordinary depositors in one of those brutally unfair short-term/long-term decisions that technocrats like so long as they have the early warning to opt out of them. While the banks were closed to ordinary people, there's little doubt that plenty of insiders took the time to get their money out and it will be interesting to find out who they were.

But that largely doesn't matter. Bigger systems are bound to more corrupt and every regulation has its loopholes and exploiters. Everyone is badly overextended and betting on cleaning up once the rubble begins to fall.

In Cyprus, the Russian elite looking for a safe place to put its money when the people turn on them intersected with a Eurocratic elite trying to eliminate safe harbors and cheap places to do business. And they all bumped into British senior citizens looking for a cheap place to retire and angry leftists with no serious economic plan, but a determination to overthrow the government.

Cyprus is the place we go to learn that everything is tangled up with everything else and that there are no more answers left; just blame to be passed around and money to be stolen.

Everyone is deep in debt and no one is going to pay up. And why should they? Southern Europe may have dug itself into a hole, but the Eurocrats ordering them to dig out were the ones who provided the shovel because it seemed like a good idea at the time. Debt was a profitable and useful political tool. It still is.

American Federalism was built on the Federal assumption of state debts. Obama's two-term reign was built on massive bailouts used to consolidate power while reassuring the banks that they would be taken care of. The National Debt is headed into 17 trillion dollar territory because that too is a useful political tool. Driving the debt to the point where it can never be repaid is meant to transform the entire way we do business and spend money. And it's working.

Cyprus was a dirty little demonstration that you can kill two birds with one stone by giving a desperate government two impossible choices. And despite all the reassurances, there is no real reason to believe that it will stay in Cyprus. If anything the last few days have demonstrated how effective that particular tactic is. And once the money has fled Cyprus, the demonstration will be considered a success.

The problem with Europe, as with the United States, is that you can only assume so much debt and failure. German bankers may profit from pressing Cyprus depositors, but the German people are still in hock for far more than they should be. Similarly New York bankers and California Green tech entrepreneurs may be making money from the last four years, but their actual cities and states are deep in debt and floundering.

The European Union's interlinkage makes as little sense as tethering some of the most productive states in the United States to the least productive states. The sort of thing that outrages Europeans has long been taken for granted by Americans. 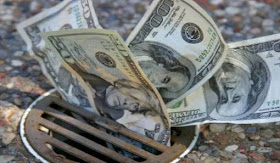 The two-term kleptocracy now in office was elected on an explicit pledge of wealth redistribution, but the process of moving money from healthy communities to unhealthy communities, from bad cities to good cities and from bad states to good states, has been underway for a while. And no one in the badlands ever has to pay a price for that.

Detroit, a city where hardly anyone bothers paying property taxes, has finally gotten an emergency financial manager, but there's no real reason to believe that the people sticking it out in Motor City who don't pay their bills, but do collect government cash, are going to change.

But the real question is how long it will stay that way. For now everyone subscribes to the myth that a recovery is here and that all the really big investments that depend on working countries are safe.

China pretends that America isn't being run by lefty professors-for-life with worse math skills than manatees and America pretends that China's economy isn't one giant Potemkin village maintained with currency manipulation and slave labor. Everyone pretends that everyone wants to be in the EU, despite a pesky refusal to hold actual referendums on the topic (and to ignore those that have been held) and also pretends not to notice all the money in the EU budget that can't be accounted for.

All this is Cyprus and Greece, but on a much bigger scale. Everyone is spending money that they don't have as a return on future investments that depend on improved productivity and development; even as most of those countries commit to a Green worldview that exchanges development and productivity for austerity and malaise. China can still put pedal to the metal, because its middle class is still only forming. Once it has fully formed and the currency games end, then so will China's boom.

Whether or not other governments and their banking systems begin looting consumers as crudely as the Cyprus scheme attempted to do; loot them they shall. They have been looting them for some time already and there is no way that they are going to stop. The social and financial systems of the modern world are much too expensive and too unsustainable to do anything else. All this will be declared necessary. It will hit the rich harder than the middle class, on paper, though the reality will be different. And it will go on hitting the middle class, because that is, as a famous bank robber once said, where the money is.

The middle class is the economic heart of a nation. Building it up moves a country into first rank status. And then everything else follows, including a gargantuan government. Unbuilding a country requires trashing the middle class. And we are now in the unbuilding phase of human civilization.

The left likes to pretend that removing the middle class will make room for some clean regime of the oppressed. What it will actually do is remove the citizenry with enough power and wealth to keep government in check and replace it with beggars and rebels who depend on government subsidies while hating the government. If you want to see what an extended bout of that looks like, you can travel to the Middle East. These days you can try Europe as well.

Eurocrats fancied that the Arab Spring meant that the Muslim world was finally catching up to Europe. It's the other way around. These days Europe is catching up to the Arab Spring and not just because of the wave of Muslim colonists spreading across its shores. European countries are losing the vestiges of democracy and bouncing between unelected technocrats and elected extremists.

The Brotherhood phenomenon is not foreign to Europe. Not when Athens is tilting to the Golden Dawn and Italy's new power broker is a leftist comedian whose sole virtue is that he hates it all. Eventually the far right or the far left will get its ducks in a row and make a serious play for power and the Eurocrats will either be caught flatflooted or will be forced to invalidate elections. Either one is going to be ugly. 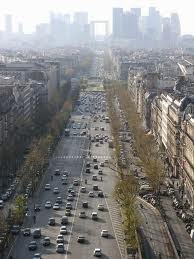 That is one more reason why American liberals should not be too proud of the Obama machine. What looks shiny and clever in 2013 may take on a whole different appearance as the malaise drags on and an angry jobless generation looks to get its payback and paychecks by voting for anyone who screams the loudest.

Beating Mitt Romney was no great achievement. Neither was beating McCain. But at some point the government-media complex of social welfare and crony capitalism will go up against an angry populist with an agenda and an organized movement, from the right or the left, and then things will get properly ugly. That man isn't on the scene yet, but he's probably hanging around meetings somewhere and imagining what he will do if he ever gets the chance. And if he ever gets the chance, it won't be pretty.

The establishment has no plan except to continue doing its thing while pretending that nothing is wrong. It can't fill the hole in the boat so it bails in more water from the ocean and calls it investment. It's a madness that will begin nearing its end once people are standing outside banks demanding their money back. And that is as true for the United States as it is for Europe.

The last century saw the development of a variety of unstable political and economic systems while this century tried to universalize them. Now we are all paying the price.
Daniel Greenfield at March 19, 2013
Share