"War is peace," entered our cultural vocabulary some sixty-four years ago. Around the same time that Orwell's masterpiece was being printed up, an armistice was being negotiated between Israel and the Arab invading armies. That armistice began the long peaceful war or the warring peace. 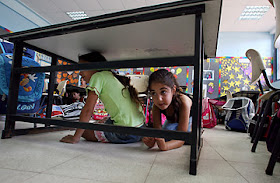 War has an endpoint. Peace does not. A peace in which you are constantly at war can go on forever because while the enthusiasts of war eventually exhaust their patriotism, the enthusiasts of peace never give up on their peacemaking.

Warmongers may stop after a few thousand dead, but Peacemongers will pirouette over a million corpses.

As you read this, Obama is probably stumbling through some ceremony or speech in Israel. The speeches all say the usual things, but there really is only one purpose to the visit. There really ever only is one purpose to these visits. The revisiting of the endless peace war.

Peace time means that it’s time to ring up some more Israeli concessions in the hopes of getting the terrorists and their quarreling states back to the negotiating table for another photo op in the glorious album of peacemakers. And if the photos are properly posed, perhaps there will even be another Nobel Peace Prize in it for all the participants.

It would be nice to think that the peace disease was one of those viruses carried only in the bloodstream of liberals. But it's not.

Every so often I am asked about a solution to the Israeli-Palestinian-Arab-Muslim conflict and the interrogators are baffled when I tell them that there is no solution. "No solution at all? But there has to be a solution. What of all the moderate voices of goodwill? What of all the mothers who only want to raise their children to sing happy songs about peace? What about all the old soldiers who are tired of war? What if we get them all in a room to shake hands and pose for photos? Then won't there be peace?"

As society has become more progressive, it has become progressively more difficult to explain even even to intelligent people that the world simply does not work that way.

For two Cold War generations it was nearly impossible to communicate that there really would be no peace with the Soviet Union other than the cold kind maintained by a mutual balance of power. Their children and grand-children appear equally unequipped to understand that most serious wars end with either one side definitively losing and fundamentally changing as a result of that defeat or both sides maintaining a cold peace that will last only as long as neither side believes that it can squash the other with a surprise attack.

Israel did have peace until it began peace negotiations. It wasn't a perfect peace, but aside from the minor problems of the Intifada, a comparative pinprick set against the violence that began after that infamous Rose Garden handshake, it was a good time whose like was then not seen again until Israel stopped playing peace process with the terrorists and learned to keep them away instead.

But the relative absence of violence, according to the amateur peacemakers, isn't peace. A wartime peace isn't what they want. What they want is a peacetime war. Let there be handshakes and suicide bombings. Let there be bloody bodies scraped off the sidewalk, but let there also be children's choirs singing about peace. Let a thousand tombstones rise, so long as everyone can believe that peace is at hand.

This vulgar worship of peace as a religion, a creed that restores the faith of faithless men and women in humanity is a combination of empty sentimentality and calculated ignorance. 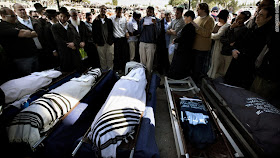 We must have peace in our time, the peacemakers say. And Israel must provide it. More territorial concessions must be put on the table. More goodwill must be shown. More ends must be bent over backward so that the peacemakers can stare at their televisions and sigh, their faith in the goodness of every man, woman, child and suicide bomber restored once again.

Who will Israel make peace with? President Abbas of the Palestinian Authority, who hasn't run for office since Hamas won the elections, doesn't want to negotiate. Hamas only wants to negotiate a short-term pause in its campaign to destroy Israel. When he isn't warring with Hamas, Abbas is declaring that he shares the same view on terrorism as Hamas.

Hamas or Abbas, whichever the peacemaker chooses will surely make him an ass.

But peacemakers don't fancy details. They like the big picture. And the big picture is that there must be an answer. Tens of thousands demanded it in London before the war and Chamberlain delivered it to them. Peace arrived in our time, shortly before the Nazi bombers. Thousands more demanded it of every American president who faced a Communist thug across a negotiating table. And they got it.

There were nuclear treaties that meant nothing to the Soviets and that did not bring peace, but that made all the amateur peacemakers feel better about themselves. And then instead of peace coming across a negotiating table, the Soviet Union collapsed because a persnickety cowboy wouldn't give up a missile defense program that every Harvard graduate knew could never work. And now, as another Harvard graduate proudly tries to take credit for Israel's Iron Dome, they still know it can't work.

Reagan didn't end the Cold War with treaties; he ended it by doggedly pursuing superior firepower.  And that is why in the name of peace, the Harvard grad looking over Iron Dome on his visit to Israel, has shown Russia his peaceful flexibility by abandoning the final stage of missile defense. Every Harvard grad knows that missile defense doesn't bring peace. But what could anyone expect from Reagan? The poor dummy went to Eureka College. How could he know that defeating the USSR wouldn't work?

Obama wants the same thing from Israel that he's trying to get by selling out Poland on missile defense. Peace. While the only times Israel had any measure of peace is in the aftermath of a war, Harvard grads and the people who listen to them know that peace only comes about at the tail end of a long string of concessions and appeasement. And then when you have finally given your tormentor your house keys, your car keys and your lucky 2-dollar-bill, then having rifled through your empty pockets, he will finally nod grudgingly and agree to peace at last.
That is if he doesn't actually want to kill you.

And that is the trouble with peacemakers; they don't really take into account how to make peace with killers. Most countries lock up violent murderers when they kill a dozen people for fun. But when they kill a dozen people in order to liberate other killers or lay claim to a piece of land, then they are worth negotiating with. And the only outcome of the negotiations is establishing murder as a negotiating tactic.

Peace leads to war because peacemaking rewards the warmakers. It rewards the obstinate killers who refuse to stop killing. And the more it rewards them, the more they kill.

That is why Israel has been decades late in delivering the peace that all the amateur peacemakers want. Every time it phones Terrorism Inc. to place an order for peace with extra brotherhood on top, a suicide bomber pulls up to its front door. And so for two decades, in a pesky reality of peacemaking that none of the peacemakers care to hear about... peace has meant war.

Every time a new phase of the endless peace process is launched, more people die. More people die during the negotiations than otherwise. The peacemakers explain this by saying that the terrorists who aren't at the negotiating table are trying to sabotage the terrorists who are at the negotiating table. The dead are sacrifices for peace and if Israel fights back against either group of terrorists, then it is guilty of obstructing the peace process which was otherwise going well.

So here we are with Obama t-shirts on sale to liberal American Jewish tourists in Jerusalem kiosks, a city whose Jewishness the man on the t-shirts will not recognize because it would harm the prospects for peace. And the question on their minds is how are we finally going to make peace happen. 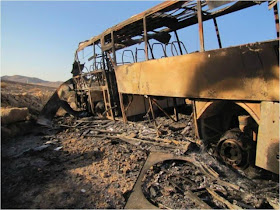 The rational response is that peace simply isn't going to happen. The two terrorist groups in their two states were set up for the sole purpose of destroying Israel. They are funded and supported by those countries that were attacking Israeli farmsteads with tanks around the time that Orwell was putting his final touches on "War is Peace, Slavery is Freedom and Ignorance is Strength."

They are not going to stop trying to destroy Israel because it's all they know and it's their only reason for existence. And if that weren't enough, they have spent generations teaching their children to hate and there is no sign whatsoever of them putting the brakes on the hate machine which expresses more clearly than anything else that they do not intend to stop fighting now or even twenty years from now.

Not when their educational system is busy training the suicide bomber of tomorrow.

But ignorance is a particular strength of peacemakers. They don't want reasons why it can't happen. Nor do they want to hear that the best kind of peace with people whose religion tells them that they will go to heaven if they die while cutting your throat is the heavily armed peace of cold iron and steel.

War is their peace and ignorance is their strength.
Daniel Greenfield at March 20, 2013
Share