Will America Ban Criticism of Islam?

In 1935 Sinclair Lewis wrote It Can't Happen Here, a novel about the rise of tyranny in America, whose message was that it indeed can happen here. Just to remind us that in fact it "can happen here", Supreme Court Justice Stephen Breyer used the occasion of his appearance on noted legal forum, Good Morning America, to suggest that there may not be any First Amendment protection for burning the Koran.

Breyer's statement was every bit as flippant and ignorant of the Constitution and even previous Supreme Court decisions as you would expect from a Clinton appointee. 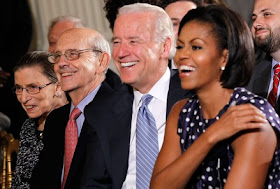 To begin with, Breyer misstated what Holmes had said and what he had meant. In Schenk vs United States, Holmes wrote, "The most stringent protection of free speech would not protect a man falsely shouting fire in a theater and causing a panic." The key word here is "falsely". Shouting "fire" in a crowded theater when there really is a fire, is a warning. Shouting it when there is no fire, is a malicious attempt to start a panic. Holmes used the metaphor to argue that freedom of speech was contextual, so that some speech which presented a clear and present danger in a time of war could be banned. An Anti-War argument during peacetime might be legal, but illegal in wartime.

Breyer is relying on a widely discredited decision from almost a century ago, and taking it completely out of context. It's as if Breyer had decided to pluck Dred Scott vs Sanford, a decision made closer to the time of Schenk vs United States, than to our time, and used it to argue that companies don't need to pay non-citizen workers anymore. No Supreme Court has actually banned political speech on the grounds that Holmes did in a very long time.

What Breyer is proposing smacks of an attempt to reintroduce WW1 security measures back into law, measures that were widely considered illegal even at the time, and that next to slavery and prohibition, represent low points in American jurisprudence. The same liberal civil rights activists who warned us that the Patriot Act was scary and totalitarian, will of course have nothing to say about Breyer's flirtation with laws that make the Patriot Act seem like Woodstock.

Am I exaggerating? No. We are talking about laws that prohibited derogatory or disloyal speech toward the government. Laws under which a filmmaker who directed a movie about the Revolutionary War was imprisoned on charges of making German propaganda since the British were our allies. We're talking about laws which extended into monitoring people's speech in their own homes. Theodore Roosevelt denounces those laws as "unpatriotic and servile" and "morally treasonable to the American public". That quote was widely circulated by Democrats, in opposition to the Patriot Act, who are now silent when Breyer flirts with using those laws themselves as precedents for censoring speech that offends Muslims.

Breyer is even more misguided, as Schenk vs United States was at least a case in which the defendant's free speech arguably incited people to commit the illegal act, of dodging the draft. Burning the Koran does not incite people to commit any illegal acts.

Here we can clearly see the true perversity of Justice Breyer's misapplication of the Schenk case. Schenk urged likeminded people to resist the draft. Refusing to serve was itself illegal, Schenk was encouraging sympathizers to commit an illegal act who would engage in the "stampede" and lead to the "danger" which justified criminalizing Schenk's speech. But who exactly is going to "stampede" in Breyer's Koran burning scenario?

Either Breyer has to argue that burning the Koran will encourage violent assaults on Muslims, an argument that would essentially criminalize all criticism of Islam. Or he has to argue that burning the Koran will result in a backlash of Muslim violence. The latter is easier to prove, but sets an equally disturbing precedent, as it would criminally any speech that could lead Muslims to "stampede through the crowded theater". A disturbing component of this argument, is that it would hold non-Muslims criminally responsible for Muslim violence. 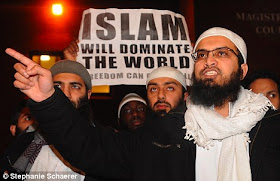 For example a man walking through a Muslim neighborhood wearing a provocative t-shirt, who is set upon and stabbed by a Muslim, could be charged with inciting the very violence that he was a victim of. Under Felony-Murder laws, people have been charged with the murder of members of their group by law enforcement officers. Since a hate crime is considered a felony, and people have been charged with felony hate crimes for mere arguments, it would essentially become possible to charge people with the murder of one of their group by a Muslim, if they are found guilty of provoking the Muslim.

However under the relevant Supreme Court precedents on political speech, the real test is not "fire in a crowded theater", but the "imminent lawless action" of Brandenburg vs Ohio. The majority opinion there stated that; "the constitutional guarantees of free speech and free press do not permit a State to forbid or proscribe advocacy of the use of force or of law violation except where such advocacy is directed to inciting or producing imminent lawless action and is likely to incite or produce such action."

In other words burning the Koran is fully legal. Telling a crowd, "Let's go burn down that mosque" would not be. Specifically, speech can only be criminalized when it actually calls for an illegal act. A test that is obviously not met by the Koran burning.

But Justice Breyer is aware of this. His comments on Good Morning America, ominously call for the Constitutionality of Koran burning to "be answered over time in a series of cases which force people to think carefully". What Breyer is really doing, is questioning the Brandenburg test, and talking about reopening the criminalization of free speech. His neutral language might go over most people's heads, but what he is actually doing is telling state lawmakers to go ahead and criminalize burning the Koran, and then arrest someone for doing it, run the case through the courts until it reaches the Supreme Court.

Breyer has given the go ahead to state lawmakers and law enforcement to begin harassing Koran burners to see if it holds up. His real message is, "Go and get em, boys".

And the Supreme Court decision might not be what people expect. In 2003, on Virginia vs Black, the Supreme Court ruled by a wide margin that state laws could criminalize burning the cross, so long as it was done in order to intimidate. The rationalized hinged on the KKK's long history of intimidating African-Americans, but the door had been opened to censoring some speech based on content and context. That the decision was bad should have been obvious when the lone African-American justice on the court dissented from it.

This was a shift from a much more widely publicized and controversial, yet extremely narrow decision in 1989 on Texas vs Johnson, on flag burning. There the Court had found by a 5 to 4 margin that flag burning was protected speech. In 2003, the decision however was quite different, and while it did not approve of a ban on cross burning in general, it did approve of a ban on cross burning, if done in order to intimidate. And the safest bet for getting laws against Koran burning approved is to piggyback it on the precedent set by Virginia vs Black. Fraudulent claims about Islamophobia would be used to argue that burning the Koran serves the same function as cross-burning.

In 2003, justices Kennedy, Ginsburg and Breyer ruled in favor of a cross burning ban if done to intimidate. If Sotomayor and Elaine Kagan joined them on a Koran burning case today, then the court will have a 5 to 4 majority in favor of state laws outlawing burning the Koran. Considering Ginsburg, Breyer, Kagan and Sotomayor's well known contempt for the Constitution, it leaves Justice Kennedy as the swing vote. A thin thread on which to hang the First Amendment.

This however is not even the worst case scenario. Because Breyer might be proposing to open an even bigger pandora's box, than that.

Of course Breyer might just be stupid, as well as a snake. In the recent McDonald vs Chicago case, he actually wrote a dissent asking, "When is a gun semi-automatic". During the review of the 2000 election, Breyer actually told a Republican lawyer, "whether we win -- whether your side, the side you're supporting wins or loses", an excessively and inappropriately candid admission for a Supreme Court justice to make. He defended his interest in introducing foreign laws into the United States by saying, "I can read what I want". It is also quite possible that Breyer thought his audience was dumb and needed a metaphor that is as populist as it is problematic, even if he had to misstate it.

But there is another uglier possibility, which is that Breyer meant exactly what he said. That he wasn't satisfied to just propose applying Virginia vs Black to burning the Koran, but that he actually wanted to revisit Holmes' original standard. There is also a war on today, but where during WW1 speech sympathetic to the enemy was criminalized, this time speech hostile to the enemy would be criminalized.

The argument would be used that burning the Koran endangers the lives of US soldiers and incites terrorist attacks against America. Terrorists would then be able to define the limits of free speech for Americans. And anything that might make Muslims angry, would be off limits.

The idea that a country would criminalize speech that the enemy doesn't like seems absurd on the face of it, yet Muslims receive that protection in Europe and even Israel. For example, Israel's left wing judiciary sentenced Tatiana Soskin, a woman who drew a picture of Mohammed as a pig to 2 years in jail back in the 90's. At the time, the Clinton Administration's spokesman, Nicholas Burns condemned her as "sick or evil" and said that "she deserves to be put on trial for these outrageous attacks on Islam".

The significance of this is that back in 1997, the Clinton Administration's policy was already to encourage treating any mockery of Islam as a crime. Things have only gotten worse since then. Two of the people who publicly burned the Koran, including Derek Fenton at Ground Zero, have already been fired. Fenton was fired by NJ Transit, a state public corporation, which effectively means that punitive government action has already been taken against a Koran burner. How far it will go, will depend on the public's willingness to stand up for the United States Constitution and our civil rights, in the face of a totalitarian ideology and the politicians eager to kowtow to it.

It's easy to dismiss the idea of Koran burning as a crime as one of those things that "can't happen here", but in fact it can happen here. And I hope that this examination has shown people just how close it really is to happening here.
Daniel Greenfield at September 14, 2010
Share