Tolerance is a Cooperative Value

The most important thing to understand about tolerance is that it is a cooperative value. It can only work by way of mutual agreement. A one sided tolerance translates either as disdain or fearful appeasement. It is often this second kind of tolerance that people speak of today, when they describe how they tolerate a noisy neighbor or a difficult family member. What they really mean is they have become unwilling to respond to offensive behavior out of fear or more commonly a sense of futility. This is the brand of tolerance that most Americans practice today, dutifully ignoring offenses, until something occurs that passes all boundaries of decency. Like the Ground Zero Mosque.

Contrary to the perceptions of the political and cultural elites who view Americans with a careful disdain, the average American is neither blind, ignorant nor stupid. Whether or not he reads the papers or follows the news, he is well aware of who carried out 9/11 and numerous attacks before and since. He has never read the Koran, but he has seen enough terrorists holding it up to get the idea. He has never been inside a mosque, but he knows that far too many terrorists have. And he can count well enough to find the vigorous delinking of Islam and terrorism propounded by the political and cultural elites to be thoroughly unconvincing. Because even while he wades ankle deep in the media's stream of propaganda, his judgments are made based on common sense. And common sense is that when people are trying to kill him, they are probably not his friends.

But he has been patient and held his peace. He has been tolerant, not in the sense that liberals define tolerance, but in the way that they have imposed it. His tolerance has been silence and inaction. He has gone on with his life, tending to his work and his family. He has not embraced Islam, but neither has he thrown rocks at the windows of mosques or torched the green Saudi flag, or practiced any of the other behaviors that non-Muslims are often on the receiving end of, in the far less tolerant Muslim world. But that silent tolerance has been tested, again and again by American Islamists and their protectors among the political and cultural elites, who had taken his silence for consent. And in truth his silence had more of Walsh's The Quiet Man to it, than that of the downtrodden Dhimmi slave. He had learned that in a changing country it was best not to take offense, to go your own way and look away from what you did not care to see. This form of tolerance he had been told was American, but as a river has its banks, so too tolerance has its limits. And a moment must come, when the quiet man decides to be quiet no more.

What is the purpose of such tolerance? It is to serve as a "fence of civility" beyond the limits of the law. It is what prevents people from protesting at funerals or in front of private residences, even when such actions are legal. It maintains certain standards of public behavior, even when such standards may not be defensible under some readings of the Constitution. It does not impose on others, what they would not want imposed on themselves. It respects their values, as we would like our values to be respected. Such mutual tolerance prevents a nation from boiling down into ruthless squabbling and violent chaos. It places limits on political conflict and religious imposition in the name of common decency. And we hold to those limits, even toward those we only tolerate, but do not admire, love or even care for very much.

Such tolerance however only functions when it is mutual. Assorted lunatics and crazies may flout it, but their doing so will exclude them from having any meaningful say. Their lack of tolerance for others alone does not upset the applecart. But when a large group demands tolerance, but is unwilling to show it, then tolerance takes on the form of an unequal power relationship. What used to be a fence between two neighbors, instead becomes a swinging gate that only one neighbor has the power to use any time he pleases. The other neighbor is told that tolerance requires him to look away when that happens and make no protest over it. And if he attempts to use the gate himself, the police are immediately called.

But in the case of Islam, talk of inequality is a farce. Muslims have never been unequal in America. They have never been taken out of their homes and interned for their race alone, or brought here as slaves, denied a decent education or used as experimental subjects. They have in fact been shown vastly more tolerance than they have ever shown others in their entire history. And that alone is a damning indictment of Muslim civilization as we know it.

When Muslims complain about Islamophobia, they are mainly complaining about law enforcement measures taken in response to Muslim terrorism, and blowback from ordinary Americans in response to the same. This is profoundly different from the experiences of immigrants and slaves who were discriminated against on the basis of their race or religion. Islamist organizations are cynically piggybacking on the legitimate civil rights struggles of American minorities, in order to promote a foreign agenda. That agenda continues to be paid for by oil money and dictated out of Saudi Arabia, a country which does not extend civil rights even to 50 percent of its own Arab Muslim population, let alone to its vast numbers of non-Arab and non-Muslim workers and slaves.

The ugly truth is that for as long as Muslim communities and mosques in America continue to harbor, and give aid and comfort to terrorists, then both law enforcement and ordinary Americans will have good reason to be suspicious of their loyalties. And beyond even the terrorist threat, it is easy enough to look across the ocean to Europe, where Muslims have begun to terrorize non-Muslim minorities, including Jews and Sikhs, and even the nation's Christian European majorities. Above it all hangs the specter of Sharia or Islamic law, a barbaric system of jurisprudence that denies equality to women and non-Muslims.

When Americans look to Muslim leaders for reassurance, they instead receive doubletalk and indignation. They are left to parse ambiguous condemnations of terrorism by Muslim leaders who are employing a definition of terrorism that encompasses the actions of the US Marines, but not those of many Muslim terrorist groups. There are assurances that Sharia is a wonderful thing, and no willingness to disavow the horrors that Sharia has brought to Pakistan or Iran or Saudi Arabia. And the same liberals who treat The Handmaid's Tale as a true warning about the threat of Christian Dominionism, dismiss any talk of the threat of Islamic law as "intolerant".

But intolerant to what and to whom? It is surely not the intolerance of 50 percent of the population who are deprived of legal equality under Islamic law. Or that of all non-Muslim minorities who are faced with legal second-class status under this arrangement. And that raises the larger question, can one truly be intolerant of an intolerant thing? Islamic law is undeniably and unambiguously intolerant. As a theoretical matter, we can look away from it. But to look away from it, once it is being implemented non-consensually is to give in to intolerance.

It does not require some sort of Muslim takeover of the United States to see the legal consequences of the intolerance of Islamic law. When the Grand Mufti of Australia justifies the gang rape of non-Muslim women by calling them "uncovered meat" and claiming that they are responsible for being raped, and not the rapists-- we are seeing the ugly reality of Islamic law in practice, in the same way that women in Pakistan or Dubai are seeing it. Women no longer need to go to a Muslim country to be subject to Islamic law. They can be subject to it right where they live. It may be violent and not strictly legal, but law is ultimately defined by common practice, rather than the other way around. And judges are already beginning to defer to the Muslim view of rape, in America and Europe. 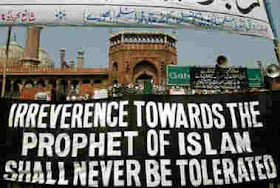 When a country fills up with people who live by different values and laws than the natives, mutual tolerance can avert a conflict. But it must truly be mutual. And while Americans have bent over backward to accommodate the rituals and beliefs of Muslims, there has been absolutely no reciprocity from the other side. And that is the real story of the Ground Zero Mosque. It is a wake up call because it demonstrates the absolute unwillingness of Muslims to show any tolerance whatsoever for the pain and suffering of the very people they victimized nine years ago. While Non-Muslims are expected not to bring a bottle of wine from the duty free shop into a Muslim airport cab or eat in front of a Muslim during Ramadan-- Muslims cannot seem to even have the basic decency not to capitalize on a terrorist attack to grab up some real estate on the cheap and then build a giant mosque complex in an area where there are fewer Muslims than in most parts of Tokyo.

Americans oppose the Ground Zero Mosque because they know it for what it is, an act of intolerance. An ugly activity that exposes the contempt and the unequal power relationship that now exists between Muslims and Americans. If Muslims will not tolerate Americans insofar as to respect Ground Zero, then what exactly will they respect? There is no answer, because the answer is nothing. The constant demands for tolerance represent the same unsustainable and unequal power relationship that is bringing Europe to its knees. If Muslims do not show tolerance to Americans, then they have no right to demand it in turn. If they insist on their legal right to build the mosque, then they might wish to consider what the country would look like if they received only what they are legally entitled to from everyone else. America has done its best to be tolerant of Muslims, and has received murder, lawfare and contempt in return. If more and more Americans are becoming tired of being the ones to show tolerance, while getting none in return, Muslims may discover that they have imposed on the good nature of a good-natured people to its limit.
Daniel Greenfield at September 13, 2010
Share