With all the political instincts of a suicide bomber, Barack Hussein Obama used a speech meant to promote a 50 billion dollar stimulus plan, to whine that Republicans "talk about me like a dog". That moment of unscripted self-pity during a speech where he was supposed to be projecting empathy for millions of out of work Americans, showed that once again the only person, Barry really cares about is himself. 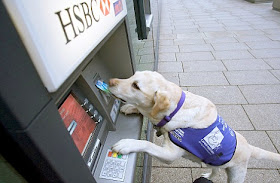 Americans don't talk about Obama like a dog. Unlike Indonesians or his Kenyan Muslim forefathers, Americans actually like dogs. They don't like Obama very much anymore. And if in the upcoming elections they are threatening to whack him across the nose with a newspaper, much like they would to a dog who insists on making a mess in the front yard, there is no actual affection in the act. And his Milwaukee speech only serves to remind them why.

In his appearance at Labor Fest before corrupt Union bigwigs like Richard Trumka (involved in money laundering and violent assaults), whom he made sure to thank by name, Obama came bearing a 50 billion dollar stimulus plan. A 50 billion plan full of "bridges to nowhere" to be built by union labor, with the union bigwigs skimming off the top and passing along a percentage of the vigorish to the White House and the Democrats. This is crime, old fashioned style. And Americans might be able to forgive it, if they weren't already on the hock for the bailouts of automakers to benefit the UAW, the Wall Street bailouts to benefit banks, the ObamaCare takeover to benefit the SEIU and now another phase of the spending spree to benefit the AFL-CIO.

It would just be cheaper to cut every union member a 100,000 dollar check, than to have any more bailouts. But naturally Obama disagrees. Because the prime purpose of unions is to harvest money and votes for the Democratic party. And a major objective of Obama's war on the economy has been to turn private sector jobs into government jobs and union jobs. Obama and his congressional colleagues aren't looking to fix unemployment, they're looking for a piece of the action. And long after Americans have gotten sick of his bailouts and stimulus plans, there he comes again with yet another plan to put more money in his campaign war chest at taxpayer expense.

Under Obama, the US National Debt is now larger than all the available money in the world. What that means is that Barry and his colleagues are sticking America with a debt that can never be repaid. And the money won't just be spent redecorating the Oval Office, or plowed into the 2012 reelection campaign, everyone who's part of the action will get to take some off the top. That was why the Soviet Union really collapsed, because the only economy that was working anymore, was the Five-Fingered economy. And Obama and his boys and girls are masters of the Five-Fingered economy. There is no thought of long term consequences or accountability, only theft piled on theft, all of it to benefit the pyramid of associates that helped him get elected. So if Obama is a dog, then the US Treasury and the American taxpayer are his fire hydrants.

Just this year the majority of Americans said loud and clear, that they did not want ObamaCare. And Obama rammed it through anyway. The majority of Americans have said they want spending cuts, instead here comes another 50 billion dollar stimulus plan. Most Americans now oppose the Obama agenda, and the response from the White House has been two fingers stuck in two oversized ears. If anyone is being treated like the dog in this relationship, it's the American people. 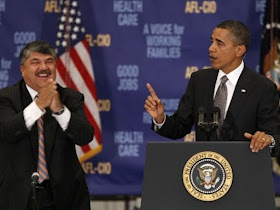 At Labor Fest, Obama basked in the admiration of some of the powerful people who had helped him bankrupt America. The corrupt Unioncracy of fat mustachioed bosses who still love him, as long as he keeps pushing enough money their way so that the corrupt machine grinds on. In front of the representatives of an outmoded institution, most people have associated with organized crime since before he was born, Obama got up on his pedestal and and accused Republicans of having "no new ideas". Of course the last time a union member had a new idea, it was to use Democratic Governors to forcibly unionize workers in completely unrelated fields, and against their will.

In Michigan, home care workers are fighting to free themselves from mandatory UAW membership. But while the UAW may make cars, and home care workers look after children-- as far as the fat union bosses are concerned, Granny had better give up all that big "caring for children from low-income families" dough, so the bosses can pass it along to Obama's reelection campaign. Now there's no doubt that forcibly unionizing babysitters in the Auto Workers Union is a "new idea", but then so was human sacrifice and cannibalism-- and we don't consider those to be a good development. And while for no no "strike-breaking" teenage babysitters have been shot or faced picket lines, but no doubt the day is coming, when Cindy will have to fork over her 50 cents to the UAW too.

But that is the problem with categorizing the value of ideas based on their "newness". It's certainly a true accusation that the Republicans are not proposing any new ideas. But that's because "STOP SPENDING MONEY YOU DON'T HAVE" is not a new idea. But like a man on a rooftop who replies to shouts of, "Don't Jump" with, "You have no new ideas", Obama's accusation misses the point. If there's a fire, putting it out is not a new idea. But you should do it anyway. Sure, "putting out a fire" isn't as new and appealing an idea as appointing a Czar in charge of fires, declaring the fire a national landmark, and then trying to bailout the fire-- but it has the virtue of actually getting results.

There are few "new" ideas in government. But some time around the Kennedy Administration, liberals got it into their heads that the purpose of government was to come up with bright new ideas from bright new people. Their mistake was confusing government with kindergarten. The actual purpose of government is to be competent managers and not screw things up too badly. Instead like the "just out of college" math teacher who spends an entire year teaching New Math, only to find that no one in her class knows what 2 + 2 equals-- Obama is arguing that he deserves points for creativity, rather than results. Yes the Republicans may be technically right, but look how shiny my new plan is. 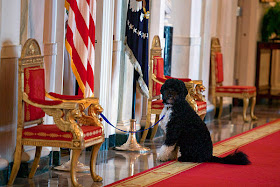 And so Obama is still clinging to his "Change" brand. Sure it may have failed, but wouldn't you rather have "new ideas". Newness has been the key to Obama's success. He was new to the Senate and new to the White House. He was new to the idea that 2 + 2 = 4 and that money doesn't grow on trees. He was new like New Coke and New Math, and of course piles and piles of new debt. The compulsive imperative of newness only makes sense to people in advertising, stock speculation and movies who are terrified of ever not being on the cusp of something new, lest they be left behind.

But going crying to his union backers that the Republicans are mean and won't let him play with the economy is pathetic, almost as pathetic as self-consciously cribbing from Jimmy Hendrix in another desperate attempt to associate himself with something, anything, cool. Obama may complain that Americans talk about him like a dog, but it is he who has treated Americans like dogs, and far worse. He has treated Americans the way Democrats have always insisted on treating Americans, like wallets with feet, only waiting to be picked.

Like a big free-spending dog, Obama has eaten all the food, pissed on the rug, chewed up the furniture and began biting the family. All it means though is that for 2012, the family may decide it's time to take him for a long, long walk and put an ad in the paper. "One Labrador Deceiver. Charming, but absolutely no manners.  Has already eaten us out of house and home. Has no papers. Free to anyone who will take him."
Daniel Greenfield at September 12, 2010
Share