When the Taliban and its Al Qaeda allies blew up two giant Buddha statues in Afghanistan,it put the Jihadist alliance on the world's radar even before the September 11 attacks.

The destruction of the statues was widely condemned by just about everyone. Even Democrats.

Now, Joe Biden has decided to free an Al Qaeda commander who helped bomb the statues.

As the Taliban retake Afghanistan, Biden’s decision to free Abdul Latif Nasir signals support for the Jihadists and for the North African Muslim Brotherhood regime that agreed to harbor Nasir. 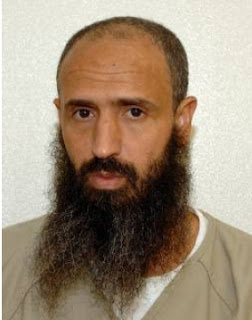 There were plenty of reasons to keep Abdul Latif Nasir safely locked up in Gitmo. Even the Obama administration, which made it its mission to free every Islamic terrorist, was having trouble springing Nasir. Government documents describe the accused Al Qaeda terrorist as an explosives instructor who also trained Al-Qaeda recruits in the "use of the AK-47, rocket-propelled grenades, Beka machine gun, and mortars" and received "advanced training in explosives and poisons at the chemical laboratory" at Osama bin Laden's Mall Six Compound.

Nasir admitted to being "the emir of al-Qaida fighters at the Kabul front" and had been in charge of 250 Jihadists at Tora Bora. He's young enough, in his fifties, to jump into any one of a number of conflicts, and he has the kind of experience that would be invaluable to Al Qaeda and ISIS.

Just to make things even easier for the Jihadists, the Biden regime isn’t even trying to ship Nasir to some out-of-the-way place, but is sending him right back to Morocco whose elected political system is run by the Muslim Brotherhood's Justice and Development Party (PJD).

PJD boss Saad-Eddine El Othmani, falsely described as ’moderate’ by the media, recently congratulated Hamas, PJD’s fellow Muslim Brotherhood branch, for its "victory" over Israel. Osama bin Laden and Al Qaeda leaders had been Brotherhood members and the PJD has its own terrorist links. Sending Abdul Latif Nasir to the Brotherhood’s Morocco is aiding terrorism.

"The United States commends the Kingdom of Morocco for its long-time partnership in securing both countries' national security interests. The United States is also extremely grateful for the Kingdom's willingness to support ongoing U.S. efforts to close the Guantanamo Bay Detention Facility," the Biden administration stated in a note of appreciation, thanking the Muslim Brotherhood for helping Biden free Islamic terrorists while compromising national security.

While in American custody, Abdul Latif Nasir praised the bombing of the Ghirba Synagogue in nearby Tunisia. Al Qaeda claimed credit for the attack and Nasir was able to name one of the attackers. He also praised an Egyptian bus attack in which Islamic terrorists threw Molotov cocktails at buses full of tourists, but claimed that the targets had been intended to be Jews.

Morocco currently has the largest Jewish community in the region outside Israel. After claiming to care about antisemitism, Biden has chosen to dispatch an antisemitic terrorist to Morrocco.

There is a lot of old and ugly unfinished Arab Spring business from the Obama administration hanging over Nasir. Releasing him reopens some of those old wounds and lethal threats.

Both American and Morrocan authorities suspected that Nasir had been a member of the Libyan Islamic Fighting Group. The Obama administration had celebrated the Muslim Brotherhood's brokering of a peace deal with the LIFG in which it switched its allegiances from Al Qaeda to the Brotherhood. That deal with Obama and the Brotherhood proved to be Gadaffi’s last mistake.

The LIFG played a crucial role in the Islamist overthrow of Gaddafi, but the decision to harbor LIFG Jihadists struck home when an Islamic terrorist linked to the group carried out the Manchester Arena bombing which killed 23 and injured over a thousand. Another LIFG member, Ahmed Abu Khattala, led the attack on the American mission in Benghazi leading to the death of Ambassador Chris Stevens. Releasing Nasir is the latest chapter in pandering to the LIFG.

What all of this means is that if Abdul Latif Nasir decides to get back in the game, he’ll have plenty of options in his own backyard and plenty of contacts. He won’t be the only ex-Gitmo terrorist as the Jihadists released by Biden join those already set loose by Obama.

Al Qaeda figures identified Nasir as a "member of the Training Subcommittee of the Military Committee" and as a "weapons purchaser". Before the assessments were hijacked by Obama's pro-terror activists, they warned that he "will probably engage in future hostilities or support foreign fighters".

The assessment also noted that Nasir had "threatened members of the JTF-GTMO guard force to the effect of referencing the 11 September 2001 attacks".

Nasir had gone to Afghanistan because he “wished to fight and die as a martyr.”

Like its predecessor Obama administration, the Biden administration is empowering terrorists and endangering lives around the world. The assessments and reports on Nasir suggest that it’s highly likely that he will return to the Jihad. He has already allegedly been involved or sought involvement in a variety of conflicts from Chechnya to Libya to Afghanistan. But the instability created in North Africa by Obama’s Arab Spring will leave him plenty of options back home.

Nasir has also expressed a preference for killing Jews. His release is another warning that the Biden administration, like its predecessor, has no regard for the threat Jihadists pose to Jews.

Finally, if Nasir returns to training Islamic terrorists, it’s likely that American soldiers will face his students in battle. Despite Biden’s false claim to have withdrawn from Afghanistan, 600 U.S. soldiers have been left behind. Not to mention diplomats, aid workers, and other Americans.

American forces also continue to maintain a presence in North Africa and the Middle East. Last month, the United States held African Lion, the annual military exercise in the region, in Morocco which involved, among others, personnel from the Georgia National Guard.

Among Abdul Latif Nasir's dark history, the assessment mentions that the Al Qaeda terrorist was "the explosives expert who assisted the Taliban in destroying the Bamyan Buddha figures".

As the Taliban retake Afghanistan, Biden’s decision to release the terrorist linked to an act that first brought the Taliban to the attention of the world sends a message of support for terrorism.

The Jihad could not have gotten a clearer thumbs up from the Biden administration.