The Hypocrite is Baaack 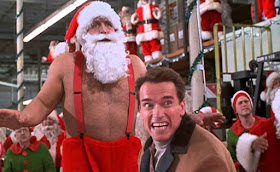 Arnold Schwarzenegger washed out of Hollywood. When he got into the California gubernatorial recall election, he was outrunning a string of bombs like Collateral Damage, 6th Day and Batman and Robin.

After he failed in politics, leaving behind a badly mismanaged state and a sex scandal, he went back to Hollywood. And he failed even harder. The Last Stand had a $45 million budget. It made $12 million in the states. Sabotage had a $35 million budget and made only $17 million worldwide.

So Arnold went right back into politics. Unlike the private sector, failure in politics doesn’t matter. He went into politics calling Democrat opponents “girlie men” and he went out as the “trophy wife” of the Democrats and their special interests. The vain celebrity selfishly exploited a political revolution that might have saved California, but instead handed it over to the bankruptcy of permanent Dem rule.

After washing out of Hollywood again, Arnie is doing a brisk tour of the Dem circuit.

His Terminate Gerrymandering Crowdpac's cause is supported by Eric Holder's National Democratic Redistricting Committee. Terminate’s site takes you to its brief posted on Common Cause’s site. Common Cause has received over a million from George Soros and its board is chaired by Robert Reich, the radical lefty activist and former Clintonite. Common Cause claims to have coordinated the Schwarzenegger brief. Reed Smith, the firm that drafted Arnie’s brief, is a Democrat firm that was accused of voter suppression for its role in removing Nader from the ballot in Pennsylvania.

The brief begins by claiming that Schwarzenegger, Kasich, and other “former governors—from both major political parties—who have witnessed firsthand how partisan gerrymandering in their States has robbed citizens of full participation in the democratic process.” The irony is overwhelming.

Schwarzenegger boasts of presiding over “election reforms” that left California a one-party state. Kamala Harris, the Great Obama Hope of 2020, won what amounted to a Democrat primary against a fellow Dem. Reed Smith is most famous for helping Dem staffers working on the taxpayer dollar hound a third party candidate off the ballot by challenging a voter who signed his name as Bill instead of William.

And if you don’t believe that, last year Arnold and the Schwarzenegger Institute and Common Cause hosted David Daley, the former editor of the radical lefty site Salon, to discuss his book, Ratf**ked, which accuses Republicans of a “Secret Plan to Steal America's Democracy”.

The brand of democracy that Arnie is peddling “terminates” democracy and Republicans. Its great dream is to turn the rest of the country into an undemocratic one-party state. Just like California.

But now the great Hummer collector has found a new cause: suing oil companies over global warming.

If only someone had told Arnie that his four Hummers, his Bugatti Veyron, his Porsche 911 Turbo, Ferrari 360 Spider, Mercedes-Benz SLS AMG and his M47 Patton Tank were bad for the environment. And then there was the time that he tried to promote his bomb, The Last Stand, by crushing a car with his tank. Why didn’t the oil companies tell him that was bad for the environment? There shoulda been a label.

It was actually Schwarzenegger’s obsession with getting a Humvee for his collection that made the Hummer happen. But just because he can drive one, doesn’t mean you should.

And he’ll be hosting an environmental conference in Vienna. How will he get there?

There is his Gulfstream III jet. He bought the $35 million jet to commute from his Brentwood mansion in Los Angeles to the capital in Sacramento. Instead of moving to Sacramento, he chose to fly back and forth. The trip allegedly did as much damage to the environment in an hour as a car does in one year.

"Did you know that air-drying your clothes for six months saves 700 pounds of carbon dioxide?” he had lectured Californians. A private jet like Arnie’s could churn out 90,000 pounds on a cross-country flight.

But go on air-drying your clothes while he jets around to Europe to save the planet from people like you.

As Al Gore reminds us, when you’ve failed at everything else, you can always be an environmentalist.

Schwarzenegger fought to ban plastic bags. Now you can’t get a plastic bag in Los Angeles, but he can zoom his sports cars around the city. And no, he allegedly doesn’t get speeding tickets either.

Those are for little people.

The failed actor quickly grasped the essential hypocrisy of progressive politics. And that has defined him.

There was an awkward moment when Arnold Schwarzenegger was asked about #MeToo. Back when he first ran for office, multiple women had come forward to accuse him of groping and assaulting them.

Arnie had been forced to skip the Common Cause gala thrown by his lefty friends after a threatened protest. Initially he denied the allegations, and then admitted that he might have “behaved badly.”

Now Arnie praised #MeToo, "I think it’s fantastic. I think women have been used and abused and treated horribly for too long." He claimed that the charges against him were "politically motivated," then admitted, "I made mistakes." Then he held some sexual harassment classes. And it was okay.

The media made much of Schwarzenegger’s Twitter denunciation of Trump after the Access Hollywood tape scandal broke. It conveniently forgot how many women had accused Arnie of groping them.

The essence of conservatism is that we should have few rules, but that they should apply to everyone. The essence of the left is that there should be infinite rules which the bosses never have to follow.

The same media industry that pretends to take sexual harassment seriously brings Arnold back so he can deliver a few of his tired lines about “terminating” opponents and ending with, “I’ll be baaaack.”

He’s useful because he provides Republican cover for lefty initiatives like Common Cause and eco-fascism. And some in the audience will still cheer his corny gags even if they won’t pay to see his movies.

Maybe tomorrow or the day after, the reckoning will come. His accusers will get the media spotlight. And the environmental conferences and awards ceremonies will dry up. France will demand its Legion of Honor back. The Schwarzenegger Institute will change its name to the Waldheim Institute. And the oil companies will sue him for not putting a warning label on the cars that he poured their products into.

But then there’ll be another Terminator movie. The last one couldn’t break $100 million in America. And if the next one bombs, he’ll just have to go all the way baaaack into politics.

"If I'd been born in America, I would've run," Schwarzenegger claimed during the last presidential election. Just imagine a national ban on oil and gas for every vehicle except his private jet.
Daniel Greenfield at April 02, 2018
Share