Washington D.C. is the Most Unequal City in America 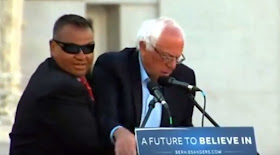 “Income Inequality in America: The Rise of Oligarchy and Collapse of the Middle Class,” the Sanders, Warren and Moore town hall, comes to progs from the most unequal and oligarchic city in America

If Bernie, Liz and Michael really want to see income inequality, they can take a walk away from the marble and glass edifices of big government to see what big government had wrought. It isn’t any of their usual villains, the corporations and banks, who made Washington D.C. so miserable.

It’s the triumph of socialism.

Washington D.C. and its bedroom communities are what the entire country would look like if the left got its way. A socialist apartheid state divided between the business of government and the poor.

But the three socialist stooges aren’t just in the business of politics. They’re millionaire poverty pimps.

Bernie Sanders made over $1 million pushing conspiracy theories about income inequality. Denouncing big business let him rent a private Delta 767 with a menu of herb crusted lamb loin, chocolate ganache and fine cheeses. The Sanders clan is up to 3 homes now and Bernie is using his clout to get two of his kids elected to political offices. Who better to lecture us on the “Rise of Oligarchy” than an oligarch?

Bernie made it from living on unemployment to the 1 percent using the government. But there’s only room for so many senators who can run for president in Washington D.C. That’s one government program you can’t replicate for everyone living in D.C. slums on government money.

Elizabeth Warren is there to show Bernie what a truly ambitious socialist poverty pimp can do.

Lizzie owns a $740K condo in D.C. a far more expensive Victorian home in Cambridge and has a net worth of over $15 million. She picked up a $625K advance for A Fighting Chance, a book attacking corporations, paid to her by a corporation. Her follow-up, This Fight is Out Right, earned her only a $200K advance last year.

Harvard Law School’s “first woman of color” also made $350,000 for teaching one class.

But there’s only so much room for a fake Cherokee asbestos lawyer slash consumer advocate who likes to tell other people they didn’t accomplish anything before going back to one of her luxurious homes.

The Consumer Financial Protection Bureau, her own government agency, operates from a luxurious building that cost more per square foot than the Trump World Tower or the Bellagio in Vegas.

If only there were some sort of agency to protect taxpayers from the CFPB and Elizabeth Warren.

And then there’s Michael Moore. 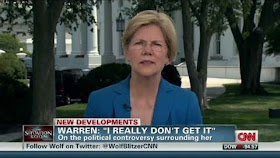 Moore has his own fake working class story and he rode his fake anti-capitalist documentaries to a fortune in cash, much of it through alleged serial rapist Harvey Weinstein. At one point, Moore owned 9 homes. That’s more homes than Bernie Sanders and Elizabeth Warren combined. The pudgy leftist got famous pushing gun control, but has been known to go places with nine bodyguards.

Two of his writers were warned that if they operated under union rules, one of them would be fired. And so they had to keep working without health benefits instead.

Michael Moore and Bernie Sanders inveigh against employers. But they were terrible bosses.

Bernie, the friend of the working man, was known to his staff as “abusive”, a “screamer and a table-banger.” His campaign had its own #MeToo chapter with an accused sexual harasser being covered for by the Bernie campaign. "I remember feeling physically unsafe," his California outreach director said.

It’s hard to think of three worse choices to discuss income inequality and oligarchy than three millionaires with more than a dozen homes between them who treat their employees like garbage.

But Sanders, Warren and Moore aren’t just random rich people. They’re poverty pimps who got rich by pretending that they had something to say about the plight of working class people in America.

Washington D.C. is full of poverty pimps. They come in all shapes, sizes and colors. But the one thing that they have in common is that they get rich by keeping the poor where they are. Their only solution is to turn the working class into the welfare class where they can be milked for book deals and documentaries. And office buildings that cost more per square foot than a luxurious Vegas casino.

Much like Washington D.C., Sanders, Warren and Moore have something to tell us about income inequality and whose fault it really is.

"How do we create an economy that works for everybody?" Bernie asked.

It’s odd that Bernie and Lizzie don’t have much to say about that. But what can they say?

Take away everything except the government and its satellite industries, contractors, lobbyists, experts, non-profits and academics, and you end up with the apartheid urban template that is Washington D.C.

Moore, Warren and Sanders talk about a middle class because they know that’s where much of their audience comes from. But they ideologically loathe it. In their ideal world, there’s no middle class. None of the consumers who, as Bernie famously decried, want a “choice of 23 underarm spray deodorants.” And none of the small businessmen who, as Warren even more famously complained, think they built it.

The middle class is naturally conservative. It’s aspirational. It seeks security, not revolution. And what leftists are really peddling is a revolution that will leave them even more on top than they already are.

If you want to see income inequality in America, don’t tune in to watch three leftist millionaires put on their outrage show, look at their homes, and look at where that power and money comes from.

It doesn’t come from hard work.

It’s hard to point to anything that Bernie ever accomplished. Like Moore and Warren, he got very rich because of his politics. Income inequality made these three poverty pimps into millionaires.

They’re very rich because they’re members of the right party with the right views.

Washington D.C. and the big blue cities where income inequality is at its worst are full of those like them. Venezuela, the Soviet Union and North Korea don’t always happen overnight. The middle class is slowly hollowed out by a growing nomenklatura whose only expertise is in wealth redistribution.

And that’s how you end up with millionaire poverty pimps and no middle class.
Daniel Greenfield at March 29, 2018
Share