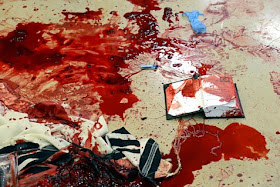 The axe that fell on the head of a Rabbi in Jerusalem was held by the same hand that beheaded Yazidi men in the new Islamic State. It is the same hand that held the steering wheel of the car that ran over two Canadian soldiers in Saint-Jean-sur-Richelieu, Quebec and the same hand that smashed a hatchet down on the skull of a rookie New York City cop in Queens all in a matter of months.

Their victims were of different races and spoke different languages. They had nothing in common except that they were non-Muslims. This is the terrible commonality that unites the victims of Islamic terror.

The media shows us the trees. It does not show us the forest. It fragments every story into a thousand local narratives. In Jerusalem the killers were angry because of Jews praying on the Temple Mount. In Queens and Saint-Jean-sur-Richelieu, they were outraged because we were bombing the Islamic State.

And in the Islamic State they were killing Christians and Yazidis because America hadn’t bombed them yet.

And so like Chamberlain at Munich and FDR at Yalta, like a thousand tawdry betrayals before, they make themselves believe it. And then they make us believe it.

A thousand foreign policy experts are dug out, suited up and marched into studios to explain what specific set of un-Islamic Muslim grievances caused this latest beheading and how the surviving non-Muslims need to appease their future killers. And then another tree falls. And another head rolls.

The appeasement never works. No non-Muslim country has ever reliably made peace with Muslim terrorists inside its own borders. Even the Muslim countries have a shaky track record. Most have settled for either massacring them, like Algeria and Jordan, or secretly allying with them, like just about every Muslim country from Pakistan to Saudi Arabia. 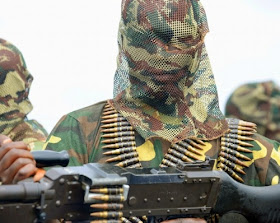 It is never the Muslim terrorists who are at fault for not being appeased by any compromise and any concession. It is the fault of their victims for not appeasing them hard enough.

Compromise with Muslim terrorists is impossible because the issue is not really about Jerusalem, oil revenues in Nigeria, Kashmir or Syria. It’s always about Islam. The territorial claims are unlimited and uncompromisable because they are backed by Islam. No concession can ever suffice because Islam promises its followers not merely some land in Syria, Israel or India… but the entire world.

The forest is Islam. The trees are theirs because the forest belongs to them. Jerusalem and Kashmir are not any different than New York or Sydney. Muslim historical claims are mythologies invented to give weight to their religious violence.

After losing a few wars the Arab Muslims who had been fighting for a Greater Syria decided that they would fall back to claiming to be “Palestinians” while demanding a state on the territories that the Jordanians and Egyptians had ethnically cleansed Jews from in 1948 before losing a war to those same Jews in 1967. But that was never anything other than a down payment on the rest of Israel.

Meanwhile the Islamic State is recreating Greater Syria under a Caliphate.

Turkey’s president, who sponsors the Islamic State and dreams of reviving the Ottoman Empire, recently announced that America was originally Muslim. It’s absurd, but so is claiming that Israel never existed and that its Arab Muslim conquerors are really some sort of ancient “Palestinian” people who were there first. When even the most ridiculous lie is told often enough, it becomes mistaken for a fact.

There were no friendly Islamic militias in Benghazi. There are no moderate Taliban. No one is looking to cut a deal for peaceful nuclear energy in Tehran. They are looking to cut our throats.

The moderate and the extremist, the good and bad Muslim terrorists, are no different than our own police game of good cop and bad cop. President Abbas of the Palestinian Authority said that his policies are no different than those of Hamas. The Free Syrian Army and the Al Qaeda aligned militias in Syria fight together. They are both out to create an Islamic state. The only difference is that the FSA and the Palestinian Authority get their money and weapons from us. Hamas and Al Qaeda get them from our allies in Turkey and Qatar. And they often get them from us. 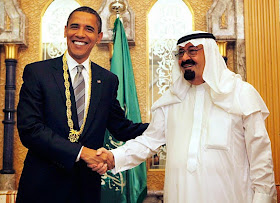 There are no good Muslim terrorists. There is no territorial compromise that will sweep away a thousand years of brutal ideology and replace it with our idea of the good life. Moderates who just want an extra mile on a map don’t chop down old men at prayer, don’t rape little girls or burn families to death.

Santa Claus, the Easter Bunny and the good Muslim terrorist are all stories that we tell ourselves. It’s time to start telling ourselves the truth.
Daniel Greenfield at November 24, 2014
Share