Obama’s excuse for his illegal amnesty will be that the immigration system is “broken” forcing him to act. But when Obama says that the system is broken, he means that some parts of it still work and so he intends to break immigration all the way through to benefit his own corrupt political allies.

That will hurt his own voters the most, but the Democratic Party has a notoriously masochistic relationship with its voting base. It beats them up and then it gaslights them by hugging them and telling them that it was really the mean Republicans who punched them in the face.

When African-American unemployment rates rise, the workers who can’t find jobs because of all the brand new DREAMERs won’t blame the White House, they’ll blame the evil Republicans for income inequality, assuming Sharpton manages to read the term correctly from his MSNBC teleprompter.

According to Obama our immigration system is broken because it doesn’t allow illegal aliens who illegally crossed the border to take American jobs. That’s not a broken system, that’s what the system is supposed to do.

When illegal aliens aren’t allowed to legally take American jobs, that’s how you know the immigration system is working. In the language of progressivism, helping means ruining and fixing means breaking. A system that fulfills any useful purpose must be reformed out of all usefulness. If the tattered shreds of the immigration system still keep a single Democratic voter from legally cashing a welfare check and casting a vote, then immigration must be reformed and helped and fixed until it is completely destroyed.

The immigration system is broken because it was reformed so many times that it makes as much sense as an outhouse on a space shuttle. Its main function now is to bring millions of people without jobs to a country where millions are out of work. Obama wants to fix that by adding millions more people.

Our system of immigration is a perfectly good system for importing lots of low wage workers. The only problem is they’re being imported into a country where there are a lot more low wage workers than there are jobs. The cost of providing food stamps and social services for the immigrants and the Americans they put out of work is passed on to the shrinking middle class which kills more jobs.

Some Republicans would like to modify it to help Mark Zuckerberg bring cheaper third world programmers and engineers to replace the Americans over at Facebook. Why settle for just wiping out the working class, when you can also take out chunks of the middle class?

Our immigration system made perfect sense back when we were opening factories everywhere. It made sense when new ranches needed hands and land needed working. It makes a lot less sense when the government is fighting a war on carbon, when ranches have to get out of the way of the spotted red toad and farms are starved of water in the name of the environment.

The million immigrants a year are not entering booming industries, but serving as cheap labor in declining ones. And they’re doing it in a country where declining industries and poor workers are already being subsidized by taxpayers in a dozen different ways. Why then should taxpayers also be subsidizing the replacement of American workers with Somali and Honduran workers?

Who benefits from that except the Democratic Party which not only killed the industries, but is now managing to kill the American workforce? The glorious future of the new economy is a government subsidized Chinese factory using foreign workers to make subsidized solar panels in Oklahoma while taxpayers remain on the hook for the subsidies which used bonds sold to Chinese investors.

Declining industries tighten their belts by cutting costs. They find the cheapest employees they can. Those cheapest employees become a constituency for the nanny state. The nanny state makes it even more expensive to operate. The cycle spins on until the only industries left are state subsidized and everyone directly or indirectly works for the state. And the only items of collateral with which to borrow more money to subsidize them with are the land and the people. That’s not America. That’s Africa. 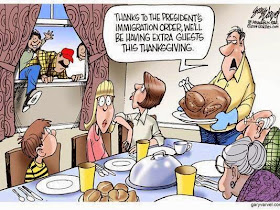 The Obama economy has created mostly low wage jobs. Those jobs continue to be filled by immigrants. There still aren’t enough jobs so Obama is proposing to create even less jobs by adding more immigrants by legalizing more illegal aliens.

There is something broken here, but it’s not so much immigration as Obama and his party.

Last week I spoke to a British immigration lawyer who described how difficult it was for seniors in the United Kingdom to retire in the United States. While most countries welcome wealthy retirees, our system makes it difficult for them to move and bring their money over here.

Meanwhile in his 2013 State of the Union address, Obama had praised Desiline Victor, a 102-year-old Haitian woman who had moved to the United States at around 80 and never learned to speak English, but did spend hours waiting in line in Florida to vote for Obama. There are plenty of senior immigrants coming through family reunification for a big bite of a social welfare system they never paid into.

That’s why Obama and his people fought so hard against an Ebola travel ban. It’s why the New York Times editorialized against allowing Cuban doctors to defect because of the “brain drain” but instead urged that “American immigration policy should give priority to the world’s neediest refugees.”

America certainly takes in plenty of needy people, but what the New York Times is emphasizing is that we should be taking in people with nothing to contribute and keeping out those who do. Its ideal immigrant will at best be a low wage worker and at worst a permanent welfare case. We don’t want Cuban doctors. We want Somali muggers and Liberian Ebola cases and Pakistani terrorists.

Immigration is not meant to serve American interests. America is meant to serve immigration. The end result of this immigration policy will be a stratified society with a permanent lower class and a thin upper class whose leftists can always start a riot by shouting about income equality without ever being able to offer it. Without social mobility what we will have left is social instability. There will be lots of young men with time on their hands to build bombs or throw stones.

If the left doesn’t win through the system, they’ll have their revolutionary constituency standing by. The only way we can afford the immigration policy that we have now is with a lot more industry and a lot less welfare. Instead our immigration rates were widened and rerouted to the Third World even as our actual industries declined. We kept on taking workers we didn’t have jobs for. We built ghettoes and rust belts and our politicians kept on reciting robotic speeches about being a nation of immigrants.

Immigration requires opportunity. We still have it, but less of it than we used to. Our immigration system is not based on opportunity. It’s based on a migratory flow of Democratic Party voters.

If the immigration system is to work again, it should work for America… not for Obama.
Daniel Greenfield at November 22, 2014
Share