It was the fall of ’38 and the motion was submitted to approve “the policy of His Majesty's Government by which war was averted in the recent crisis and supports their efforts to secure a lasting peace." 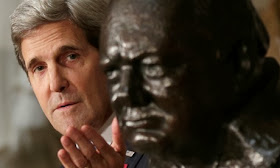 The policy being referred to was the Munich Agreement which carved up Czechoslovakia and the war being averted was World War II which would come shortly anyway. Of the hope that war would be averted through appeasement, Winston Churchill said, “Britain and France had to choose between war and dishonour. They chose dishonour. They will have war.”

Echoing that old Munich motion, the pro-Iran left is calling the nuclear deal that lets Iran keep its nukes and its targets their Geiger counters, Obama’s “achievement”. Any Democrat who challenges it is accused of obstructing the only foreign affairs achievement their figurehead can claim.

Hayes and MSNBC were only echoing another famous Democrat, Joseph P. Kennedy who warned of opposition to Munich by “Jew media” making noises meant to “set a match to the fuse of the world.”

“It would have met certain failure if at the very time when we were attempting to mediate and to obtain a peaceful settlement, we had accepted the advice of those who said you must face Herr Hitler with a public ultimatum,” Hoare warned. “I go further, and I say that if we had made an ultimatum in the days immediately before the Nuremberg speech Europe would to-day have been plunged into a world war.”

Today the Hoares warn that stiffening sanctions against Iran and demanding an end to its nuclear program will lead to war. For years, the Hoares of the Democratic Party insisted sanctions were the only way to prevent Iran from going nuclear. Now the Hoares say sanctions will alienate Iran and lead to war.

Obama spokesman Jay Carney said the alternative to the nuclear deal would be war. Those who support sanctions will "close the door on diplomacy," Bernadette Meehan, a spokeswoman for the National Security Council, warned, saying that the failure of the deal will force Obama to, “choose between military options or allowing Iran’s nuclear program to continue.”

Since the deal allows Iran’s nuclear program to continue, it’s a buffet of three choices, all three of which lead to conflict of some kind. The only variations are in the date and in the capabilities of the enemy.

That was the problem with Munich.

Hitler had already been making plans for a war with Britain and France that would commence three or four years after finishing off Czechoslovakia. The only thing that the Munich Agreement accomplished was to speed up Hitler’s timetable from three years to one by letting him finish his business with the Czechs earlier than he had planned.

“The peoples of the British Empire were at one with those of Germany, of France and of Italy, and their anxiety, their intense desire for peace, pervaded the whole atmosphere of the conference,” Chamberlain said during the House of Commons debate.

There’s “a new atmosphere” in the Iran talks, the Council on Foreign Relations’ top Iran expert said. The State Department called the atmosphere “constructive”. “Give peace a chance,” Obama urged.

"When the time comes for the verdict to be given upon the Prime Minister's conduct... none of us here fears that verdict," Hoare concluded. History would deliver its verdict on Chamberlain as it has on no other British prime minister in history making his name synonymous with craven appeasement.

And then Winston Churchill began to speak. "I will... begin by saying the most unpopular and most unwelcome thing... we have sustained a total and unmitigated defeat." 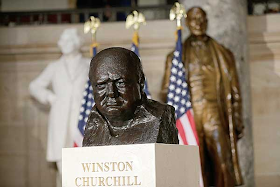 Lady Astor, whose Nazi sympathies were infamous, interrupted him with a cry of “Nonsense”. The Member for Berlin had written to Joseph P. Kennedy that Hitler would have to do more than “give a rough time” to “the killers of Christ” before she would launch "Armageddon to save them.”

“The wheel of history swings round,” she wrote. “Who are we to stand in the way of the future?”

Churchill, like William F. Buckley, believed however in standing athwart the history of totalitarians, their Reichs, their People’s Republics and their Caliphates and yelling stop.

That is the sum of all negotiations with totalitarians, whether it is with Nazi Germany, Communist Russia or Islamist Iran. The totalitarians scale up their demands and the peacemakers celebrate a victory for a compromise that gives their tyrants what they want and makes war inevitable through its appeasement.

Obama’s foreign policy achievement consists of letting Iran do nearly everything nuclear it wants in the hopes that it won’t go all the way. Containment has given way to appeasement. Iran gets nine tenths of its nuclear ambitions at gunpoint in the deal and will take the rest when it pleases at nukepoint.

“We have been reduced in those five years from a position of security so overwhelming and so unchallengeable that we never cared to think about it,” Churchill said, “reduced in five years from a position safe and unchallenged to where we stand now.” In five years of Obama, the United States has been similarly reduced from a power to a pawn. Its security has been stripped away and sold to win the approval of its enemies. It is locked into the same process of offering worthless security guarantees to its allies and then selling those allies down the river to avoid the risk that those allies might ever call on those guarantees and expose their worthlessness.

That was the Chamberlain policy that Churchill was denouncing on Czechoslovakia. That is the Obama policy with his chalkboard of worthless red lines whose bluffing powers he is determined to protect.

"Relieved from all anxiety in the East, and having secured resources which will greatly diminish, if not entirely remove, the deterrent of a naval blockade, the rulers of Nazi Germany will have a free choice open to them in what direction they will turn their eyes," Churchill said.

Similarly the nuclear deal cuts off most options for America and its allies and endows Iran with a great many options. And once it does have nuclear weapons, its options will be nearly unlimited.

Chamberlain’s rejoinder to Churchill reduced a practical problem to a philosophical one.

"It seems to me that there are really only two possible alternatives. One of them is to base yourself upon the view that any sort of friendly relation, or possible relations, shall I say, with totalitarian States are impossible, that the assurances which have been given to me personally are worthless, that they have sinister designs and that they are bent upon the domination of Europe and the gradual destruction of democracies,” he said, reciting true facts about Nazi Germany with the air of a conspiracy theory, the way that the pro-Iran left treats statements about Iran’s murderous policies and aims.

If that grim reality were indeed the case, Chamberlain argued, “There is no future hope for civilisation or for any of the things that make life worth living.”

Peace was no longer a rational program, but a philosophical one. A world where dictators could not be successfully appeased, where war could not be averted with negotiations, was not a world that he wanted to live in. The appeasement of Iran and any other enemy follows the same self-pitying logic.

Either the world is an optimistic place where war can be averted with meetings and negotiations or it is a doomed hopeless place in which no one would want to live anyway.

By making peace negotiations themselves into a moral absolute, the practical issues could be ignored and moral atrocities such as the dismantling of Czechoslovakia could be rationalized as being for the greater good of peace. Any contradictory information was drowned in enthusiasm, not for Hitler, but for peace with Hitler, which inevitably became indistinguishable from enthusiasm for Hitler.

If peace depended on Hitler and the entire hope of civilization rested on Hitler’s willingness to live in peace, the Chamberlains and their Hoares had to believe in Hitler to believe that civilization had value and life was worth living. Their modern counterparts substitute the Supreme Leader of Iran for the Fuehrer, or leader, of Germany, but otherwise they make the same mistake all over again. 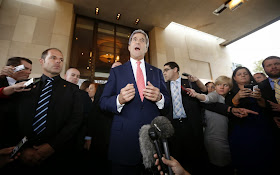 To believe in world peace, they decide that they must believe in Hitler, in Stalin, in Khamenei and all the other monsters of history. They must believe that regimes which ceaselessly talk of war, build weapons of war and torture and murder their own people on a whim somehow share their hopes for peace.

“It seems to me that the strongest argument against the inevitability of war is to be found in something that everyone has recognized in every part of the House. That is the universal aversion from war of the people, their hatred of the notion of starting to kill one another again,” Chamberlain said.

But there is no such universal aversion. If there were, war would be the exception, not the rule.

To believe in peace, Chamberlain had to lie to his conscience, to the men surrounding him and to the entire country and the world. That much has not changed, whether the subject is Nazi Germany or Iran.
Daniel Greenfield at January 21, 2014
Share