New York City mayors excel at banning everything from salt to carriages, but they are not very good at cleaning up the streets and roads after a snowstorm. 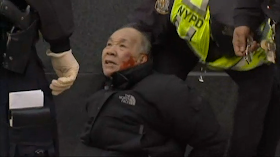 And his successor is no better.

Bill de Blasio's focus after his petty and mean-spirited inauguration was a ban on carriage horses in Central Park at the behest of a real estate developer who backed his campaign and has his eye on their stables, a tussle over who will get the credit for Pre-K with Governor Cuomo and the beating of Kang Wong, an 84-year-old man, over a jaywalking ticket.

Instead of preparing for the snow, Team De Blasio launched a crackdown on jaywalking in Manhattan where three-quarters of the residents don't own cars. And so the Upper East Side, which didn't vote for Bill de Blasio, became a snarled and unplowed mess and the jaywalking enforcers put an 84-year-old man in the hospital after arresting him for the tall order of "jaywalking, resisting arrest, obstructing governmental administration and disorderly conduct."

Jaywalking is as much a part of New York as salty pretzels and the carriage horses of Central Park. While Bill de Blasio claimed to be inspired by Mayor La Guardia, the latter had an entirely different view of the relationship between the people and the city government.

“I prefer the happiness of our unorganized imperfection to the organized perfection of other countries,” La Guardia said after vetoing a jaywalking bill, and added, referencing the growing fascism in Germany that was then admired by many progressives, “Broadway is not Unter den Linden.”

The happiness of unorganized imperfection is about as close to expressing the contrast between the American and the European way of life as any phrase can. It's also a foreign idea, not just to Bill de Blasio or Bloomberg, but to the larger political culture of urban progressives who are less interested in making the trains run on time, than in making the men and women run on time.

Mayor La Guardia was responsible for much of the city's network of roads, bridges and tunnels that were built around the social changes in how people lived. Modern progressives however don't understand infrastructure, but think that they do understand people. From the disastrous ObamaCare websites to California's light rail project, they squander billions on unworkable infrastructure that is supposed to fix social problems by changing how people live.

Bloomberg did this in blunt fashion by eliminating elevators to force people to get in shape by using the stairs and by blocking off streets to force people to abandon cars and use public transportation. Instead the number of cars in the city increased and so did the obesity rate.

Progressives are adept at politically manipulating people with propaganda, but this skill doesn't translate well at the policy level. Obama won over younger voters, but can't get them to enroll in ObamaCare. Politics is an abstract for most people. Policy is a reality.

Politics is the image they want to have. Policy is how much money they have in the bank. 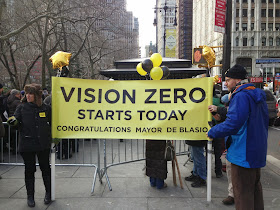 Bill de Blasio unrolled his Vision Zero plan for eliminating traffic fatalities by the year 2024 surrounded by the grieving mothers of dead children. It was a shameless performance that would have made even Piers Morgan wince. No one in the media pointed out that Bill de Blasio, like Obama, was using human shields to silence questions about a result that he couldn't deliver.

Team De Blasio could have stopped far more accidents if it had prioritized the snowstorm. Instead there were dozens of accidents as cars slipped on sheets of ice. But the dirty business of cleaning the streets is never as appealing to progressives as glamorously rolling out a useless new policy.

Sweden's Vision Zero had mixed results and the majority of serious accidents in that country are caused by wild animals. Due to the lack of moose in Manhattan, Team De Blasio swapped out people for animals and insisted that the majority of pedestrian fatalities were caused by pedestrians. The claim doesn't accord with any of the existing data about pedestrian fatalities, but it's easier to hand out jaywalking tickets than it is to accept that the city's traffic fatality rates are fairly low and that there is only so much you can do about that when you pack a lot of cars, cyclists and people together.

Accepting unorganized imperfection is not a progressive trait. If Bloomberg was more circuitous about manipulating infrastructure to change human behavior, Bill de Blasio is going right for the throat and bullying ordinary people directly. People like Kang Wong, an 84-year-old man who woke up one day in a city whose police officers were dispatched to enforce an unenforceable law.

The assault on Kang Wong won't be the last collision between the new totalitarian at the helm of the city and the ordinary people who will have to live through four years of his incompetence and abuses. The victories of the left locally in California and New York and nationally in Washington D.C. are a master class in totalitarian tyranny and progressive failure, but too many voters disassociate politics from policy, judging candidates based on their media likability until they feel the effects of their policies.

Obama's approval ratings did not implode until the voters  experienced ObamaCare for themselves. Every conservative warning and protest had fallen on deaf ears as Americans kept voting for and supporting a celebrity politician without paying any attention to his policies until the consequences of those policies caught up with them. 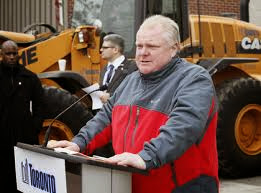 In Toronto, Rob Ford's approval ratings have lifted after a snowstorm and he is on track to win reelection despite admitting to drug and alcohol abuse. The voters are making their decision based not on his media profile, but on how well the snow got shoveled. It's something that Bill de Blasio, who is better at posing for the cameras with a snow shovel than actually managing a snowstorm, ought to keep in mind.

Progressives are only popular until the people realize that the men and women mirroring their anger and offering them everything for free can't clean up the snow, but can beat them bloody and can't fix their healthcare, but can destroy it. The left wins at politics, but fails at policies. It's learned to stop looking like Carter, but it hasn't figured out how to stop governing like him.

Americans want organized competence from their leaders and unorganized happiness for themselves. Instead progressives try to organize their happiness with their righteously ideological incompetence.

When Americans realize that the political choices they make are also policy choices between large sodas, salty pretzels, open market health care and open streets on the one hand or food fascism, DMV health care and bloody faces on the other; they will choose the unorganized happiness of freedom over the disorganized tyrannies of Bloomberg, De Blasio and Obama.
Daniel Greenfield at January 23, 2014
Share