Obituaries rarely have twist endings and the obituaries of famous people are as predictable as the rain. The obituaries for Ariel Sharon, a man who died long ago, are falling now like distant rain. 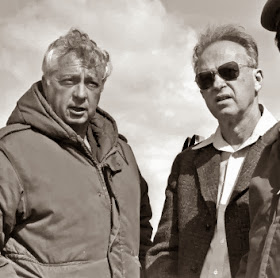 The media left invokes the ghosts of Sabra and Shatila, a bout of inter-Arab violence that he had as much to do with as Jimmy Carter did with September 11, and describes him as a controversial figure. The right and the press releases from politicians claim he embodied all the qualities of Israel and was a mythical figure whose attributes were larger than life.

Sharon was certainly a larger than life figure because, like so many Israeli generals turned politicians, he built that myth. The generals of every country are also politicians. Those who cannot hack it as politicians, usually stay colonels. Israel's most famous generals invented their own reputations and made themselves into men of myth. Some were talented fighters, none were good leaders.

Israel's predicament today is the work of two mythical generals turned prime ministers who got halfway into a program and died leaving behind a mess that no one knows how to clean up.

Rabin and Sharon began ambitious ventures and then died early on. They used forceful tactics, steamrolling the opposition, bribing anyone who could be bribed and then left the project in the hands of their creepy and inept successors; Peres and Olmert.

Rabin's peace process destroyed Israel's national security and revitalized terrorism as a force in political affairs in Israel and around the world. It was the single worst decision in the short history of the modern State of Israel. To find a worse decision by an Israeli leader, it would be necessary to reach back to the Hasmonean kingdoms thousands of years ago.

It is not inconceivable that Rabin might have turned away from the peace process, especially as the public began to realize what a disaster it was. Rabin had never been especially enthusiastic about the idea, it had been thrust on him by the fringe left and he had grasped it as a hedge against the political oblivion of a Labor Party that had lost credibility in a new multicultural Israel no longer dominated by an elite that aspired to a Socialist myth of cooperatives and political bureaucracies.

That door was shut permanently by Rabin's death under mysterious circumstances at the hands of a gunman who was repeatedly urged to kill him by an informant working for the security services and who should never have been able to get within close range of the most protected man in Israel in a country whose security is second to none.

Rabin became the martyr of the peace process and his death is commemorated annually and intertwined with the commitment to peace. Schoolchildren are brought to hear about Rabin's legacy and the importance of following in his footsteps. Generations of Israeli youth were sacrificed to the peace process, their blood shed in the name of peace, until Israelis grew tired of the nightmare.

Sharon's rise to power was made possible by the disaster that Rabin created. Israelis had attempted to make earlier course corrections by voting for Netanyahu over Peres. But Netanyahu, then as now, proved not to have the backbone to change course and stop the terrorism. And so, after Barak's disastrous retreat from Lebanon, Sharon's hour came.

There had only been and still are only two politically acceptable options in Israel for dealing with terrorism; either negotiated appeasement or holding the line. The latter meant making occasional forays after a terrorist atrocity into the territories under Palestinian Authority control, arresting a few wanted terrorists and then pulling back, and hoping the public would be satisfied.

Voters expected Sharon to go further. And he did. 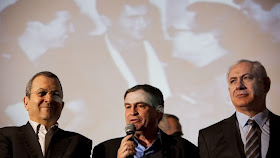 After the Passover Massacre in 2002, Sharon issued a brief statement in which he dropped one phrase. "As we speak, the IDF is already inside the 'Mukta'a' (Arafat's compound) in Ramallah." Israeli forces took the compound, a previously unprecedented act, and arrested Marwan Barghouti, the terrorist leader behind much of the violence, who has yet to be released despite international protests.

In a speech to the Knesset, Sharon said, "Our dead lie in a long row: women and children, young and old. And we stand facing them, facing the vacuum created by their murders, and we are speechless."

"The murderous gangs have a leader, a purpose, and a directing hand. They have one mission: to chase us out of here, from everywhere — from our home in Elon Moreh and from the supermarket in Jerusalem, from the cafe in Tel Aviv and from the restaurant in Haifa, from the synagogue in Netzarim — where the murderers slaughtered... worshippers, walking in their prayer shawls to morning prayers — and from the Seder table in Netanya."

"And there is one dispatcher: Palestinian Authority Chairman Yasir Arafat."

But it would not be Arafat who would chase Israeli Jews out of the synagogue in Netzarim. Sharon would do that. All that would be left for Arafat's gangs would be to burn down the synagogue after its worshipers were gone.

Of the two options, negotiating or holding the line, Sharon had decided to choose a third option.

Few commanders like to do the predictable thing and Israeli generals have a weakness for seeking an impossible alternative and then making it work. Sometimes they succeed, other times they fail.

Sharon aspired to cut the Gordian Knot of negotiations and terrorism by putting as much space, real or virtual, as possible between the Palestinian Authority and the Israeli population. There were to be no more negotiations and no more fruitless raids. Arafat could have the land he already controlled and would be kept out of the rest. It was a retreat meant as a consolidation.

The strategy was not an original one. The 'separation wall' that every trendy lefty denounces was begun by Rabin. The unilateral withdrawal from Gaza and the ethnic cleansing of the Jews living there wrapped up the strategy. But it was a bad strategy from the start.

Separation worked and it didn't. Israeli casualties dropped sharply since 2002. The days of the constant urban suicide bombing have receded into history. Israeli parents still worry, but the atmosphere isn't what it was a decade ago.  Terrorist attacks are less successful than before and many Israelis are once again able to convince themselves that a West Bank withdrawal will stop putting soldiers and settlers at risk and end the terrorism threat once and for all.

Sharon, like Rabin, left behind an unfinished strategy, but his was the more tangled one. If Rabin was making a terrible mistake, many wonder whether Sharon had a bigger plan than mere separation. Did he intend for the Hamas takeover to happen all along to bring down the Palestinian Authority and end the farce of empty negotiations? Did he have an endgame that would have shifted the strategic landscape?.

Death has closed the door on these questions as firmly as it did on Rabin's second thoughts.

After Sharon, the country has floundered with no meaningful strategy except the old one of holding a shrinking line. The separation wall helped keep out suicide bombers, but not rockets and for the first time in a long time, rockets struck Tel Aviv and Jerusalem.

Netanyahu has operated clumsily in the strategic twilight zone. On economic issues, he is a polished player, but his only strategic vision is to stick to the same defensive pathway, negotiating defensively and fighting defensively.

Israel's conservatives are overrun with the princes and princesses, the children and grandchildren of great men and women who are themselves diffident or destructive, who have no vision, but have grown up expecting to have political power handed to them. Sharon's victory was a symptom of the inability of that generation to present credible leaders either from the right or the left.

The country's current predicament was shaped by two men, one born in 1922 and the other in 1928; both products of the old left and of the military establishment. The baby boomer new left has done its damage, but there has been little in the way of leadership from that generation. Now that generation has grown old, it has done a decent job of modernizing and privatizing Israel, but it has no answers to its strategic questions. It can't even begin to formulate the questions.

It will be up to Generation X to solve Israel's strategic problem. That is assuming that they ever get the chance.

Rabin's strategy put Israel on the path to oblivion. Sharon's strategy did little more than continue the process of buying time. Instead of a grand vision, he settled for a useless oral agreement with the US that Obama disavowed, another round of expulsions and no plan for fighting the growing threat of the terrorist states on the other side of the shifting border.

Strength is not a substitute for vision. A vision may need strong men to carry it out, but elevating strong men with no vision is a recipe for disaster. The military mind often considers the best answer for the moment and has a weakness for conventional wisdom and the advice of experts. 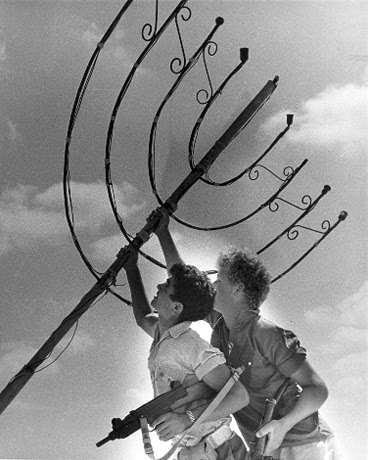 Israel fell into the trap of allowing military men and security figures to make too many decisions that
should have been made by popular consensus and the results were disastrous. And in their absence it has failed to develop leaders, instead allowing their place to be taken by generals and the post-ideological descendants of ideological figures.

The peace process is a gaping wound that Israel is unable to close. The public has no meaningful representation, instead an incestuous gang of quarreling post-ideological politicians who pretend to stand for the right or the left or for pragmatic solutions, for the Russians and the Haredim, for the Sefardim and for the working people, are squandering the time that the country is already short on for their own careers and their own wealth.

This is not an usual state of affairs in human history, but Israel cannot afford to exist in twilight, going along with the flow until something changes. If it were in a peaceful part of the world, if its people were not murderously hated by billions, if it were not constantly at war, it could move through an undistinguished prosperity without worry or doubt; but that is not its fate.

The Jewish State cannot persist in twilight. It will either fall into the darkness of an old night or step into the light of a new day.
Daniel Greenfield at January 15, 2014
Share