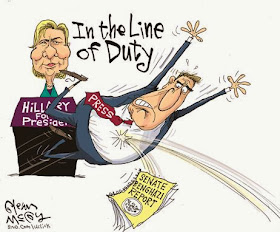 THE ONLY GOOD REPUBLICAN...

The good Republican who has the bad taste to stay alive will only enjoy a temporary vacation in the good graces of the media. It does not matter how often he pays fealty to global warming, gun control, gay marriage and amnesty for illegal aliens, or his willingness to appear on morning shows to bemoan the extremism of the Tea Party; the time will come when he will be dragged out of the Saturday Night Live studio and the CNN green room, hung from a tree and beaten with a stick for the enlightenment of the people.

The good Republican imagines that if he is decently centrist enough, he will be allowed to drive on the luxurious wide lane to the left where all traffic violations are forgiven and there is no speed limit, but unfortunately for him, he is still stuck in the same right lane as Michele Bachmann, Allen West and all the other enemies of the state where driving at any speed is considered an unsafe traffic violation.

In a country where the center is defined by the institutions of the left, the center ceases to exist. That center which the good Republican strives for is a mirage made of moonbeams and shifting goal posts.


No Country for Liberal Republicans


GET OUT OF DETROIT, YOUNG MAN

Detroit has the highest property taxes of the 50 largest cities in the country. Its property taxes are twice as high as the national average and barely half of property owners even bother paying property taxes. Five of the wealthier neighborhoods paid 15 percent of the city’s property taxes. Another 19 percent came from a handful of companies, including casinos and Motor City’s shaky automobile industry.

The population fled, the tax base shrank and the city raised property taxes which drove away more property owners leaving a shrinking tax base that had to be compensated for with higher taxes. The cycle left a bankrupt ghost town filled with abandoned properties and outlaw property owners.

To make up the difference, Detroit began borrowing more money. Under Mayor Kwame Kilpatrick, who was convicted of everything from racketeering to extortion, debt hit $9 billion while revenues plunged to nearly $1 billion. Income taxes fell from $378 million in 2000 to $245 million in 2010. At the same time, Detroit lost nearly 200,000 people; the worst implosion of an American city in the last decade.

I did an interview with Ann-Marie Murrell of Politichicks

THEIRS BUT TO DO AND DIE

It was late evening, the mullah was calling for prayers and my brother took me outside and told me to put on this vest. He showed me how to operate it, and I said: “I can’t – what if it doesn’t work?” And he said: ‘It will, don’t worry.’

I was scared and he took the vest back from me and he hit me hard, and I felt scared. Then [he gave me back the vest and] left me near the checkpoint where he said I had to operate it.

I realised it was a suicide vest because it was heavier than a normal one.

He said: “If you operate this on the people at the checkpoint, they will die – you will not die.” But I knew it was a suicide vest and I would die too.

My brother told me: “You’re here in this world and you will die. You are not here to learn or to do other things or to expect that your word will carry any weight. You are here just to die and do your duty.”


Taliban Commander Told 9-Year-Old Sister Suicide Vest Would Kill Other People, Not Her

“I grabbed my gear and ran to the barracks,” Nevells, who was 21 and a lance corporal with what was then the 24th Marine Amphibious Unit’s service support group during the terrorist attack, recalled Friday. “We watched as the building dropped then we went over for the recovery mission. There were so many people in that building and we just wanted to get them out.”

The explosion was so violent that it created an 8-foot crater and buried Nevells’ friends and brothers-in-arms under 15 feet of the building’s rubble. He and other Marines spent five days digging for survivors and freeing the bodies of the men they served with during the multinational peacekeeping mission.

“That was one of the hardest things I’ve ever done,” Nevells said while wearing a black Beirut veteran’s hat honoring those who perished during the bombing. “We just did what we had to do.”

“The worst part for me is that nobody remembers [Beirut],” Nevells said.


Iran Honors Bin Laden Mentor and Murderer of 220 US Marines


Debbie Wasserman Schultz was for Iran Sanctions Before She was Against Them - Which version of Double Dealing Debbie do you believe?


IS THERE EVEN AN ACTUAL DOG?

Sit down to your coffee with an angry woman glaring at her phone after a night of hard drinking and deliberately ignoring you. It’s a great way to prepare for the Hillary State of the Union address.

After some deep thought and brainstorming, Hillary Inc. has figured out how to jump on this Twitter trend by unveiling a 30 dollar t-shirt and 20 dollar mug with Hillary’s profile on it.

It’s not clear which glass ceilings that bio cracks. Being married to Bill Clinton is not a glass ceiling and there were plenty of female senators before her. Nor was Hillary Clinton the first female secretary of state. Just the least qualified one until Kerry came along.

Hillary is a dog owner though. Probably. With her you usually have to check.


The Hillary Mug is an Overpriced and Deceptive as Hillary Clinton

Every winter, Harvey Weinstein pokes his fat head out of a burrow, sees his own shadow and starts trying to buy a bunch of Oscars while promoting his next ridiculous project.

When we last met Harvey Weinstein, he was trying to destroy Israel and create a Palestinian state with Miral. Miral what, you ask. Exactly

Despite getting Miral screened at the United Nations, no one went to see his piece of cheap anti-Israel pro-terrorist propaganda and its widest release was in 29 theaters.

Harvey Weinstein couldn’t even fit his stomach into 29 theaters.

A lot of profiling restrictions are stupid, but in this case religion is the motivation. Banning profiling of perpetrators by their motives is a sure way of crippling investigations.

Which will reduce the quality of life of senior citizens making it easier to put them on a pathway to euthanasia.

That’s the gameplan here. First open the door to cutting spending on the so-called “last 2 months of life”, though that can’t be reliably predicted unless you ensure that they really will be the last 2 months.

Then decrease treatment options so that more and more seniors fall into those last 2 months. And that will free up money to spend on obesity programs for inner city kids, abortion, sex change operations and all the other social change obsessions of the left.


Under ObamaCare, Seniors to Receive Worse Treatment than Medicaid Patients

How bad are some of these materials? Take a look at A Muslim Primer which claims that…

Claims that the best way to understand Islam is through writings of Sayyid Qutb, the father of modern Islamic extremism whose writings inspired Osama Bin Laden [pp. 132-3]


Under Islamic law, “Women’s testimony is worth half of man’s. This is an attempt to forego distraction from family responsibilities and protect women from the rigor and discomfort of prolonged trials. It also reflects a feeling that woman’s emotional nature may prevent her from being as objective as men.” [p. 174]


Israeli Defense Minister: “All That Can Save Us is for John Kerry to Win a Nobel Prize and Leave Us in Peace”


THE SETTLERS ARE OUR MISFORTUNE

Now suppose there’s an Israeli Jew living in a “settlement”. Then he converts to Buddhism. Is he now no longer a settler?

According to The Guardian’s own style guide, he ceases to be a settler. Unless the Guardian is going by both race and religion, in which case he is still a settler, though perhaps half a settler.

To deal with The Guardian’s racial problem, suppose a couple, one half of which is Jewish and the other half is not, moves beyond the Green Line. Is their child considered a “settler”? What about that child’s child?

Does The Guardian have a blood quantum requirement of racial purity for “settler” status?


Apartheid Guardian Says Only Jews Can be “Settlers”

So what we need is a dictatorship to save the planet? Say no more UN, we get the subtle hint you’re tossing our way. And we’re throwing out our system of elections and turning over rule to Emperor Gore and his penguin minions.


NEVER NEGOTIATE WITH A CAR SALESMAN

Abbas, who according to Obama is Israel’s partner in peace, has not only invalidated any peace agreement that he may sign with Israel, but has even ruled out the possibility of changing the law via a popular referendum.

Since the “right of return” is code for destroying Israel and no Israeli government will currently agree to it, any “final” agreement that Israel signs will be invalidated by this law and any concessions that Israel makes to reach the agreement will once again be worthless.

Abbas is negotiating an agreement that he has preemptively invalidated.

In a battle hymn written to a son, Ms. Hamdan wrote: “I will soak a koffiah with your blood and save it to show to your siblings … I will be named the mother of the martyr.“

But we’re also seeing a young Muslim woman in her early twenties who isn’t dreaming that her son will become a doctor or a leader, or even a successful murderer of Jews, but she is only dreaming of the moment when she can wear his blood.

This is a mother of a child yet to be born dreaming of his future death.

When people call Islamic terrorist culture a death cult, this is what they mean. There is no interest in peace, because these cult members have no interest in life. All of their energies are oriented only toward death; killing and dying.

That is their religion. That is where Islamic terrorism comes from.


Asian Programmer Denounces Asian “Programmer Privilege” - “I looked like I was good at programming.”


THE FUTURE MUST NOT BELONG TO THOSE WHO OFFEND THEIR INVESTORS

A while ago the Jimmy Kimmel Show had a kid roundtable that offended people in China. It offended them enough that it became a domestic and internal controversy complete with protests and a White House petition that passed 100,000 signatures.

The White House responded to the petition by writing, “The Federal government cannot force ABC to remove this show. The First Amendment of the Constitution protects free speech, even if individuals might personally find it offensive or distasteful. It may be upsetting when people say things we might personally disagree with, but the principle of protected free speech is an important part of who we are as a nation.”

That’s all true, unfortunately it’s not the way that Obama does things. Not when the people offended are Muslims.