The study of any philosophy is doomed eventually to the solipsism of the idea as the real world falls away and is replaced by the construct of the world. When Buckley favored being governed by the first 2,000 people in the Manhattan phone book than the faculty at Harvard, he was on solid ground.

The first 2,000 people in the phone book, good or bad, are more likely to live in the real world than in some strange construct of the real world. And that experience will endow them with some sense of how things actually work. Some of the faculty of Harvard may live in Manhattan, but it is an imaginary Manhattan whose social and economic laws differ drastically from those of the world.

Academics are good at theory, not just the theory of riding a bicycle as opposed to the physical act of riding one, but of inhabiting a universe entirely based on that theory. An academic can create a theory in which bicycles cannot be ridden or in which cars have no mass and exist indefinitely in that world. If his theory is trendy enough, if he recruits enough students who become faculty who recruit more students into his peculiar world, the theory will spill over into the real world and begin to affect it.

Some insane obsessions that  can exist only in academia stay there. The taxpayers finance them, but they rarely have to hear about them except when a tabloid looking for a few inches of column outrage reveals how many millions are being spent on studies on why lesbians drink too much or a professor who has spent his entire career writing papers on the gay subtext of Sears catalogs from the 1950s.

Others don't stay there. Our modern obsession with racial subtext is largely the work of academics. Sociology has done more damage to American society than crack cocaine, economists who make a living telling government officials that money can be printed infinitely are a political disease and anything to do with the climate has been so thoroughly contaminated with bad motives and bad science that it might as well involve JFK assassination or moon landing conspiracy theories.

Americans got used to the idea that academia was an eccentric place full of wacky professors who occasionally came up with brilliant ideas. This was a convenient myth to cultivate because it obscured the more problematic fact that outside the sciences, the professors were rarely brilliant and their eccentricity wasn't an individual habit, but a collective political reality distortion field.

Even setting aside the influence of the left, the fields that were meant to serve as storehouses of knowledge and learning instead became wonderlands of strange theories that came to life and took them over until the fields no longer studied anything real, but only found ways to sort facts from the real world into their theory world.

American Studies, now on the receiving end of a good deal of unexpected attention after its clumsy boycott of Israel, has very little to do with studying America and a great deal to do with academics studying a world made out of their own theories that has as much in common with America as Wonderland had with Dodgson's Oxford.

Academia has become an alternate world where human relations exist in a mechanical universe governed entirely by identity politics, where the world is always on the verge of a Green Apocalypse and the only way to make anything work is to route it through the foundational theories of existence. This magical world continually changes in response to new theories bubbling up from trendy publications. The very laws of the universe can be gendered and every historical event can be rewritten by viewing it through the lens of class.

Academia is a magical world where nothing is truly fixed and everything exists on belief. Change the belief and you change the reality. It's a meta-world that has a certain fanciful appeal for intellectuals, but little relevance to the real world where things do not change because the theory does and where outcomes are hard and real and the consequences of a bad theory can mean lives lost. 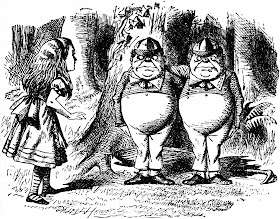 The behavior of literary characters can allow for endless perspectives, because they are both human and unreal. Economics however cannot be as infinitely elastic. Nor can any more practical field. And the infinite elasticity of literary reinterpretations is destructive because it turns the interpretation into the center of the story. The work becomes secondary and the perspective becomes primary. The words of Twelfth Night fall away and are replaced by an academic's clever perspective on it instead.

But it seems churlish to complain about something as wholesome as that when Twelfth Night, Shakespeare, English literature, the Western Canon and the written word have long ago ceased to exist as anything other than footnotes and references in a paper on not merely gender, class or race, but some perspective on a theory on all three. It's Alice in Wonderland's rabbit hole and the only thing on the other end is more of the same. It's Academics in Wonderland all the way down.

Academia is dedicated to its own theories. The real world is a reference point in an unreal world the way that an inhabitant of Plato's cave might point at the shape of a shadow as evidence in a ghost story that he is busy telling. And it might be fitting to leave the lunatics in this very expensive asylum if academia had not long ago begun calling the shots in the real world.

Every society needs ideas and those ideas rarely come from politicians, generals and CEOs. The men at the top are good at getting to the top. They're usually not as good at coming up with things to do once they're there except listen to their favorite experts who are usually leaders in the field of being experts who have their own experts whom they listen to and so on, like Swift's fleas, ad infinitum.

There's a reason that Obama has recycled many of the policies of the Clinton and Bush administrations. It's because unless a little fairy from the Center for American Progress whispers a policy proposal into his teleprompter, he has no idea what to do next except take another vacation. The Center for American Progress fairy gets its ideas from a bunch of reprocessed papers that culminated in a book whose bad ideas were simmering in academia for decades beforehand.

Thus the lunatic idea from a paper that is written entirely in unreadable Marxist gibberish and dismissed as irrelevant by any sane person is dressed up, popularized and taken around town by people who know how to translate its specialized language into something readable by the sort of people who will then turn it into dishonest slogans and market the whole thing as sound common sense that we ought to adopt right now to invest in our future and save our children.

What we have developed is a production process that takes the gibberings of a lunatic hermit in a cave and slowly translates them by a series of interpreters into convincing speech that capture the consciences of kings. The process is part Marxism-Leninism and part Madison Avenue and as a result of it we have a country that runs as well as any university-- that is badly, in debt and delusional.

The insane are leading the blind off a cliff that the blind can't see and that the insane insist isn't there.

Our ideas of how society ought to run come from people who live in an imaginary world, but who are at the center of systems that make their ideas seem sensible and workable with tricks of propaganda. The United States of America would not only do better being governed by the first 2,000 names in the Manhattan phone book, all of whom happen to be Adams, but by people who believe that we are being abducted by space aliens or that the pyramids were spaceships so long as they were able to confine their eccentricity to that one area, and dwell otherwise in a real world of hard realities.

Academia tells us how everything ought to be, based on their foundational theories, with little regard for how the world is. Incompatible results, whether in climate science or social sciences, are buried and suppressed, ridiculed away or blamed on the big business boogeyman or Ronald Reagan. There is no honest attempt to engage with any of the disasters left behind or any of those coming up ahead. 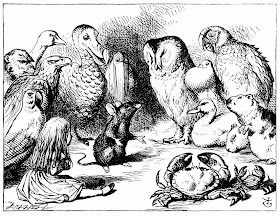 And that's the attitude for fields where there are actually results. These are the exceptions, not the rules. Much of what passes for academia now no longer has results or any external context. There is an internal structure of ideas and rules with little relation to the outside world. There are no results to be had from running everything through the  broken photocopier of race, class and gender, not only because it's a childish waste of time, but because it's not the thing itself that is of interest but the lens.

Academia has become a world of lenses, a vast optometrist's office with no patients, a telescope that sees the flaws in its lens when it thinks that it's looking at Martian canals and builds up an entire tale of a dying Martian race on a planet that is running out of water and then, even when the probes have shown that the canals do not exist, moves that tale over to earth and warns that global warming will turn Earth into another Mars or Venus and builds an entire theory based on an imaginary catastrophe.

The lens everywhere has become more important than the thing being looked at. Things are knowable facts and so not very interesting. A rock will eventually prove to be a rock. A word will have a meaning. But a theory, a lens, a perspective is an eternal joy because it can be reconfigured and played with endlessly, like magic it can be waved over everything to transform the real world into an academic wonderland where nothing has substance and everything can change on a whim.

Academia has become the endless voyage into an imaginary world with no thought of destination.
Daniel Greenfield at January 19, 2014
Share