Wrong Side of the Street

The Zimmerman case is about many things, but it isn't about George Zimmerman, an Hispanic Obama supporter who campaigned against police brutality only to find himself plucked up by the hand of Big Brother to play the villainous white racist in the latest episode of liberal political reality television. 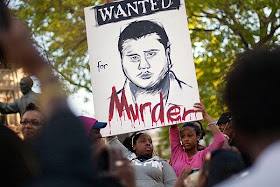 Zimmerman is the latest Bernie Goetz; another wholly unlikely cult figure who currently campaigns for vegetarian lunches in public schools and squirrel rescue. It's not that the two men had anything particularly in common. Unlike Goetz, it is very unlikely that Zimmerman jumped the gun, so to speak, but they both fill a similar niche. They represent the embattled lower half of the middle class.

To understand the Zimmerman case, you have to live in a neighborhood that has just enough property values to keep you paying the mortgage and just enough proximity to dangerous territories to make you feel like you're living on the frontier.

The chain of events doesn't make much sense to the elites, which is one reason why they assume that the explanation must be racism There weren't a lot of New Yorker readers cheering as Charles Bronson's Paul Kersey stalked the subways and parks of the city blowing away hoods. The perfect target audience for the Death Wish movies or for Goetz saying "You don't look too bad, here's another" was that bottom half of the middle class that didn't have enough money to leave the city and didn't have enough liberalism to accept the violence as their just due.

But the case isn't about race either. It's about a struggling middle class in a precarious economy trying to hang on to what it has. And it's about a culture of dropouts from the economy who celebrate thuggery and then pretend to be the victims. It's doubtful that anyone in Zimmerman's neighborhood who weathered multiple break-ins has much sympathy for the Martin family. And that's one reason that the prosecution hasn't found any useful witnesses.

If Trayvon Martin had been the clean cut innocent kid that the media tried to pretend he is, the reaction might have been different. But he wasn't. The gap between Martin and Zimmerman wasn't race, in other circumstances most liberals would have called both men members of minority groups, it was aspiration.

George Zimmerman wanted to to be a cop. Trayvon Martin wanted to be a hood. It's quite possible that Martin got no closer to his ambition than Zimmerman got to his. Both men were just going through the motions on the edge of a game of cops-and-robbers that suddenly turned deadly real. And even in a country where the thug tops the entertainment heap, the vulnerable parts of the middle class have more sympathy for aspiring cops than for aspiring thugs.

Everyone is the hero in their own story, but George Zimmerman and Trayvon Martin were living out different stories. George Zimmerman was looking out for his neighbors while Trayvon Martin was looking to live the thug life. Martin's story ended with him realizing that sometimes attitude isn't enough and Zimmerman's story ended with him realizing that sometimes even when you try to be the hero, you're going to be drawn as a villain.

But the Zimmerman and Martin story is an American story. That's why it has become so big. Back in the 70s, when Paul Kersey was skulking around on the silver screen, it was mainly an urban story. Now it's an everywhere story. It's a story about homesteaders and savages, about a shaky middle class built on piles of debt trying to protect what's left of its way of life while across the street, there's the glamor of not working and scoring money any way you can.

It's a culture clash of a primal kind. Settlers and nomads. Cops and robbers. Builders and destroyers. And it was never going to end well. The elites want the settlers to make way for the nomads, the cops to acknowledge their role in alienating the robbers and the builders to admit that their construction is really the destruction of the way of life of the destroyers. They don't understand the struggling lower middle class and they don't care to. They have a great deal of empathy for the Trayvon Martins swaggering around another neighborhood that decays at their touch, but none for the George Zimmermans, sweating, mopping their brows, worrying how they're going to hold everything together. 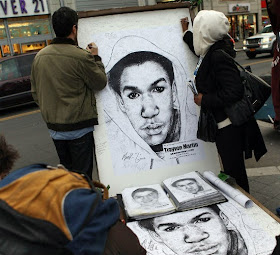 Neighborhood watches don't have to turn violent, but they exist because of the potential for violence in a society with plenty of law, but little order. The struggling middle class looks to the cops only to realize that the cops have their own job and it isn't to protect them, it's to protect each other. And so they become cops. It's vigilantism of a sort and it's a symptom of social collapse. But it's also the attitude that helped make the United States happen.

That's the real story behind the headlines, the agitprop and the circus of a public trial. It's the reality that doesn't get talked about much because it's much less interesting than the straightforward story being fed into the presses. The one about an innocent young boy killed for no reason at all. It's a story about what happens when people are backed into a corner and then told to stay there. It's about a frightened middle class trying to survive. And it's about territory.

Settlers make homes. Nomads walk in and out of them. Builders thrive on making things and destroyers on trashing them. Zimmerman picked his side of the coin and Martin picked his.
Daniel Greenfield at July 09, 2013
Share