Rarely has there been a policy as universally supported in Washington and as universally rejected by Americans of all ages, races, genders, incomes and religions as the proposal to send weapons to the Syrian terrorists. 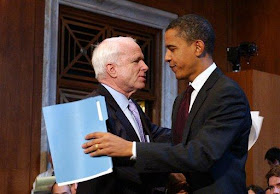 The average American who has never heard of the Al-Nusra Front, is utterly in the dark about the differences between the various brigades of the Free Syrian Army and hasn't the faintest idea that the entire thing has been a Muslim Brotherhood operation of varying degrees of subtlety from Day 1, still thinks that sending weapons to them is a terrible idea.

Even a public that is weary of war and not at all enthusiastic about jumping into another one would rather invade Syria than arm the Syrian rebels.

At least those are the results of a recent Quinnipiac poll which found that sizable majorities of Republicans, Democrats, men, women, Whites, Blacks and Hispanics (and possibly even the mysteriously reclusive White Hispanics) all opposed the proposal to send arms to the rebels; even without being told that rebel is a polite term for Islamic Jihadist and Islamic Jihadist is a polite term for the guy wearing explosive underwear next to them on their vacation flight.

The college educated and those who made it through the basic twelve, Protestants and Catholics, those making under 50K and those making over 100K, callow 18-year-olds and superannuated seniors, all came together to oppose an insane policy of giving weapons to terrorists who are certain to use them against us.

They came to this novel conclusion without a thorough grounding in foreign policy, without having ever read one of those massive tomes that outgoing secretaries of state throw together to explain their failures, and without even being told anything true and meaningful about the Free Syrian Army. The only analytical tool at their disposal was their common sense.

In a time when the country is sharply divided along class, race, gender and hoodie, this was a refreshing show of unity. The United States of America, in town and city, mariachi band, hip hop concert and hoedown, came together to oppose giving weapons to terrorists.

And no one in Washington D.C. paid attention. Why should they? They already have it all figured out.

The intelligence committees in the Senate and House of Representatives, which had briefly kicked up a fuss over Obama's plan to send guns to terrorists, withdrew their objections after being promised regular updates. If those updates are nearly as interesting as the ones for Fast and Furious, a program which merely put lighter weapons into the hands of Mexican drug lords, they should make for some entertaining reading.

The weapons smuggled into Libya, with the complicity of Uncle Barack, and the ones looted from Gaddafi's ample storehouses, have already shown up in Gaza, led to the Islamist conquest of Mali (requiring French military intervention), and have, naturally, shown up in Syria. a.

Where will the weapons dispensed like candy to the Syrian rebels end up? The real question is where  won't they end up. The Middle East is a giant arms market and the United States is abandoning the policy of plausible deniability that existed during the Libyan War to directly run guns to terrorists.

Considering the havoc that a mere 2,000 Fast and Furious guns caused in Mexico, what exactly will come of shipping anti-tank weapons to the same sort of Islamist militias who launched a full blown assault on the American mission in Benghazi?

In the great polling game of Ask the Audience played on the set of Who Wants to be President, the answer from the gallery has come in loud and clear. But no one on the stage seems to actually care. And it is that lack of concern that is more interesting than the exercise of common sense by the collective polled mind of America. 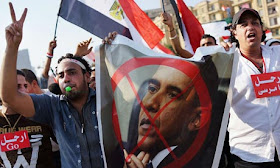 During the heyday of the Arab Spring when we were all supposed to be impressed by posed photographs of protesters gesticulating against a fiery background in Tahrir Square, it was hard to find anyone with policy influence or experience who would agree that we should just stay out of it. Mubarak staying on was equally a non-starter. They all knew that Mubarak had to go. They all knew that democracy in Egypt was inevitable. And they all knew that it would somehow work out because freedom is stronger than tyranny and talking points are stronger than common sense.

The consensus on Syrian smacks of that same empty conviction that something must be done, that the golden avatar of progress must be served and that we are on the cusp of historic change. "Inaction is not an option," say the advocates of every stupid policy from amnesty for illegal aliens to guns for terrorists.

But considering the outcomes of their proposed policies, inaction doesn't seem so bad.

The net foreign policy outcome of all our interventions in Egypt to make the Egyptians love us is an Egypt that now hates us more than ever. Hating us is the one thing that Egyptians from all walks of life can agree on. It's their national equivalent of shipping guns to Syrian terrorists.

Not only did Obama's Cairo speech, his command that Mubarak depart and his latest attempts at pressing for the restoration of the Muslim Brotherhood to power, not win over anyone, the sum of these interventions have made Egypt more unstable and made us more hated than ever.

The Libyan intervention, begun to protect the Islamist militias of Benghazi, ended with a burning diplomatic compound in Benghazi and Islamist militias gunning down two Navy SEALS while dragging the body of an American ambassador through the streets in between snapping shots of his corpse with their smartphones. (Officially they were rescuing him by taking him to a hospital controlled by the same Islamist militia that was involved in the attack.)

So what's the worst that could happen in Syria?

The most destructive influence on domestic and foreign policy is that sense of inevitability. "Something must be done," are the four words that have undone the reason of even credible conservative politicians. The next six words, "It will happen even without us" are nearly as toxic. These are the words that have convinced countless politicians to sell out on domestic policy in exchange for having some control over the final outcome.

If the entire population of the United States Senate went up to the roof of the Russell Building and jumped off, it would happen because more and more aides would talk up their senators and urge them to go up because if they all jump together, then the dissenting senators will have some control over the process.

That false sense of power and even falser sense of consensus is driving an idiotic policy in Syria.

Officially we are supporting the Syrian rebels because we support democracy, even though the vast majority of the rebels are Islamists and the only democracy they want will disenfranchise Christians, Shiites, women and anyone else left standing after the black flags sweep into Damascus. Morsi also deserves our support because he was democratically elected, even though during his time in office, he tried to amass total power and tortured and beat up his political opponents. 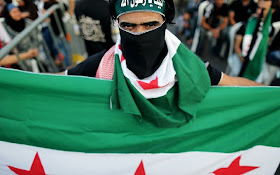 What democracy really means is that Washington D.C. has decided that the Muslim Brotherhood is
inevitable and so we might as well get on their good side by helping them take over a few countries, before it's too late. Never mind that the Muslim Brotherhood doesn't have a good side. Peel back the layers of front organizations and you find yourself looking into the hooded eyes of Yusuf al-Qaradawi who enjoys suicide bombings and long walks on the beach. But no doubt that too is inevitable.

Bobby Knight once said, "If rape is inevitable, relax and enjoy it." That advice seems to be defining our foreign policy in Egypt (where rape is an instrument of domestic policy). The inevitability of the Muslim Brotherhood's victory has become a self-fulfilling prophecy. Since they're bound to win down the road, we should help them win now. And if they start losing, then we have to ship weapons to their militias and maybe declare a No Fly Zone, because while their victory is inevitable, its inevitability must be assured with American weapons against the will of the American people.

Washington D.C. is full of Ivy League grads that have spent a lifetime reading about the Middle East, but lack the most basic sort of common sense. It's not that they can't comprehend the risks, it's that they have been taught to think that either they jump off the Morsi building and land in a Syrian rebel camp or the whole thing will happen without them and they will be left out of the loop.

And what could be worse than that?
Daniel Greenfield at July 24, 2013
Share