A century ago it was the lure of work that drew people from rural areas and far away countries to American cities. The big cities had jobs. Unlike rural areas, they had such high concentrations of them that if you moved there, then you might be able move from job to job without having to turn hobo and travel to find work. The big city offered workers to employers and employment to workers. 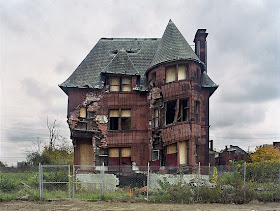 That arrangement worked when cities were places where things were made. A century ago the New York City waterfront was crowded with ships bringing in cargoes. During WW2, it was filled with entire fleets that were being constructed there. Today the river traffic consists of tour boats or pleasure craft, supplemented by the occasional EPA ship hunting for pollution in the river.

The waterfront was a hangout for the homeless, the modern hobo who doesn't look for work, in the 80s. It's being transformed into bike lanes and garden spot cafes now. That is the city in miniature. Either it's decrepit or ornamental. It just isn't utilitarian. It's not really good for anything practical anymore. Even assuming that we were going to build some fleets, we wouldn't do it in New York.

So the question isn't why did Detroit go bankrupt. The real question is why wouldn't it. Detroit was once known for making things. Now its most famous remaining industry puts together car parts and while it's more than a lot of cities have, it's not nearly enough to subsidize a large population that doesn't work or pay taxes. A population of hobos who never need to look for work.

The only real things keeping American cities from going bankrupt are inertia and some fancy cultural footwork.

Some of those who do work are still a net loss, because they use more services than they pay for, others pay more in taxes than they get or cost, but considering the level of expenses required to maintain a city and the small amounts that trickle back to cities from up the government river, it becomes harder and harder for even the middle class to pay its way.

To deal with this dilemma, cities did what so many brands did, they began upselling their lifestyle to attract a younger and wealthier elite that could inject enough money into the system to subsidize all the public housing, public schools and public everything. Some cities succeeded at it, but all they really did was prolong the inevitable. Others failed miserably.

Detroit's reconstruction plan hinges on somehow attracting a chunk of that crowd. It's just not going to happen. Its bankruptcy and proposed reemergence is a corporate strategy. Shake loose some of the pension weight and figure out a way to rebrand Detroit as a place for social media companies to set up shop. And then solicit more investment to really turn things around.

After the long struggle into and out of bankruptcy, Detroit will still be a failed city that has no future because it has no purpose.

The people left Detroit. Not all of them, but much of the productive population packed up and hit the road leaving behind a city of illiterates and the public employees designated to care for them. There were too many public employees, not enough people and very few taxpayers.

Detroit did what most cities do. It did what the country does, it tried to make ends meet by borrowing money even though it had no prospects for paying the money back. And when that failed, it went to bankruptcy court to try and reinvent Detroit as a brand new city that gullible investors will want to lend money to. There's no stage beyond that because the city isn't viable because it has no purpose.

The purpose of a city has become to take care of the people who live there. Living in a city offers the appeal of a larger social safety net. The population that needs the safety net the most also pays the least into it, making the proposition a bad deal. 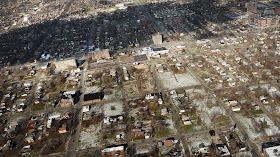 The social safety net is really there to manage the problems caused by a dysfunctional population. These problems run the gamut from riots to teenage pregnancy and they all cost money. Managing them supposedly costs less money than letting them roar on. But either way, the cost is there.

Detroit couldn't get its streetlights working, but had a large body of social welfare administrating the entire mess. Any reconstruction plan will run up against the same limits. Detroit will still be the city it was, because it is a territory that has lost its purpose. Its only reasons for being are inertia and guilt.

Twinkies could be turned around by dumping unions and launching a new ad campaign, but cities don't work that. way Even reinvented, Detroit will still be what it was.

Detroit hasn't been a manufacturing city in a while. It's a welfare city. It's there to provide social services to its wards. That makes it no different than so many other cities. Its only degree of difference lies in the proportions of its productive and non-productive populations.

Detroit has too much welfare and not enough work. But since that is its purpose and the purpose of every American city now, there's nothing to complain about. The reformers who rebuilt the city as a utopian space of public housing and public services to elevate the slum dwellers won. And places like Detroit are their victory. They fought the slum and the slum won. The slum became the city.

Any city can become Detroit. All it takes is losing that percent of the population that pays in more than it takes out. Or overspending beyond their ability to cover the losses.

Detroit is the urban endgame. Its Motown cultural capital wasn't enough to keep it going the way that the cultural capital of New York's literary industries or Los Angeles' moviemaking industries have been. But those too will run out. The publishing world is collapsing and the movie industry is becoming a multinational monstrosity. A few dot coms churning out apps and IPOs while working off Chinese manufactured gadgets will not be enough to save the city.

There was a time when GM had 700,000 employees. Facebook has 3,000 employees. Google has 40,000. The 1 percenter twenty-somethings opening campuses with catered Thai food and coolers full of energy drinks are a nice employment appetizer for a city, but with few exceptions, not an industry. 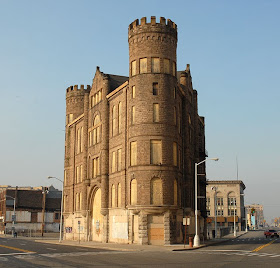 The crisis of the city is that it has become a welfare state, not just in fact, but in orientation. The city exists to take care of people who won't take care of themselves. That makes it something between a homeless shelter and a state institution. And to rephrase Groucho Marx, the city may be a wonderful institution, but who wants to live in an institution? Especially one whose chief appeal is to the people dragging it down, not those lifting it up?

The city's troubles are America's troubles. A thriving economy can support a welfare state, but a welfare state cannot be an economy. A country or a city needs a purpose that goes beyond providing services for populations that are incapable of doing the least smallest thing for themselves. Without that purpose, it is already a failed state.

Detroit exists to provide welfare for much of its population and to provide government jobs for the people taking care of them. And like those populations where generations collect welfare checks, shop with food stamps and aspire to no future other than the perpetuation of this way of life, the city that they live in has no future.

What was good for GM may or may not have been good for America, but what's good for Detroit is the destruction of America.
Daniel Greenfield at July 23, 2013
Share