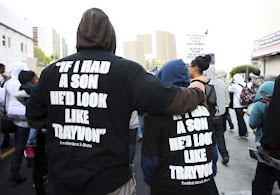 Think of the Zimmerman trial from the perspective of a bunch of lowly state officials. D.C. made it clear that they wanted Zimmerman's head on a plate and that is what the prosecution in the case has done its best to deliver.

They have done it clumsily and unprofessionally because the case would never have been pursued by professionals. And while the people pursuing it now may be the same ones who would have done it then, they're doing it for political motives. They're not there to do their jobs, but to look good to Barack Obama, Nancy Grace and the legion of angry influential people who want a conviction.

They may get their conviction, even if they do it in ways that will make an appeal all too easy.

But that's not their problem. The headlines will read, "George Zimmerman Found Guilty". If the verdict is eventually tossed into the trash, that will just "prove" that the American justice system is racist and needs more cleansing and purging. Either way the racism-for-profit lobby wins.

There's no sportsmanship here. In the last few days, the judge and the prosecution have displayed all the professionalism of a kangaroo court staffed by actual kangaroos. They haven't been following the law, instead they've been playing to a particular audience, and they expect to be rewarded for their theatrics.

The circus will shortly come to an end and whatever happens to Zimmerman, the people who made this movie, who wrote its script, shot it and wrapped it, will have gotten their way. That's not just the depressing reality of Obama's America. It's the depressing reality of a country smothered by a liberal elite that made everything since 2008 possible.

The White House still wants the Muslim Brotherhood to win. It couldn’t head off the mass protests and military action that toppled Morsi, but its Plan B is meant to salvage that disaster by paving the way for a second round of Muslim Brotherhood political victories.

What Team Obama couldn’t manage to do within the military deadline, they hope to be able to manage in the coming weeks and months as Egypt’s new government struggles with economic problems that require international aid. As the Brotherhood’s protests grow, the new government will be caught between a rock and a hard place. And the State Department will be playing the familiar game of forcing a wounded government to make concessions to its worst enemies in exchange for American support.

These are the tactics that turned over China to the Communist Party and Iran over to the Ayatollahs. The treason of the diplomats did not begin in 2008. It began far earlier and hit its peak during the Cold War. And those same reliable tactics will be employed to compel a second Muslim Brotherhood victory.

Barack's Plan B for the Brotherhood

The power of the race riot, like terrorism, lies in the threat. The man who threatens a race riot is blackmailing governments and private citizens to do his bidding. The Sanford race riot stories exist to persuade jurors to save lives and avoid further violence by convicting George Zimmerman.

While the shooting was not about race, the case has become a political juggernaut that is not about what actually happened between Zimmerman and Martin, but about the guilt and violence churning through the liberal exploitation of race and racism for political power.


Hate and Fear at the Zimmerman Trial

Unemployment is a real problem in America. And Obama has found the solution. He’s offering ambassadorships for a bargain price of 1.8 mil each.

Don’t have a job? Want to have an important position in London or Rome that will get you invited to free dinners and important events with top government officials? Just mail at least $1,800,000 to “Barack Obama/Organizing for Action 1600 Pennsylvania Avenue” and you will receive your prominent diplomatic posting in 6-8 weeks.

MORE REASONS TO PASS AMNESTY THAN EVER

The text of the Senate’s immigration-reform bill contains a small section that increases by more than threefold the number of Afghans eligible for immigration to the U.S. under a special asylum program, WND has learned.

The United States no longer holds the title of the world’s most populous, obese nation; that designation has been passed on to Mexico.

Amnesty and more immigration from Mexico could give us a good chance of reclaiming the WORLD’S FATTEST TITLE.

Among Mexican American women, 78 percent are overweight or obese, as compared to only 60.3 percent of the non-Hispanic White women.

In 2009 – 2010 Mexican American children were 1.6 times more likely to be overweight as Non- Hispanic White Children.

There is a public health crisis threatening the future of Texas. As Latinos become a majority in the state over the next 20 years, their weight problems are threatening their lives and the state’s budget

The Deep State… that sounds scary, right. It sounded so scary that Western diplomats turned a blind eye to Erdogan’s human rights abuses in Turkey, including grandiose conspiracy theories that seemingly involved half the country. They went along because Erdogan was fighting the evil military “Deep State” in Turkey.

Now the media’s Islamist apologists are reviving the Deep State as justification for Morsi’s tyranny. The new story is that Morsi wasn’t incompetent or an abusive ruler. He was undermined by the Deep State.


SCAMMERS ALL THE WAY DOWN

If a scammer scams a scam, how many scams can he scam? That’s a question to be asked of the ObamaCare Scammers, either the ones in D.C. or the ones calling people on the phone to scam people.

If a stranger claiming to be from the government calls to offer you an “Obamacare card” or threatens to throw you in jail unless you buy insurance, hang up the phone. It’s a scam.

Unless they’re from the government. In either case it’s a scam, but it’s a scam taking place at a higher level of scammery.


ObamaCare Scammers are Scamming a Scam

Racism is relative. Afro-Turks, for example, are referred to as Arabs, which tells us that Turks see themselves as “white” and Arabs as “black”.

Erdogan isn’t just using black as an insult. He’s suggesting that Kemal Kılıçdaroğlu is racially inferior because of his Kurdish origins to the “white” Turks.

Janet Napolitano to Head Up Even More Broken Organization: The University of California

US Commission on Civil Rights Member: Illegal Immigration Accounts for 40% of Decline in Black Employment

If the Democrats had to have a national park in some completely inaccessible place that ties into their history, it was a close race between the moon and hell.

Two House Democrats have proposed legislation that would establish a national historical park on the surface of the moon to mark where the Apollo missions landed between 1969 and 1972.

And why do we have no access to the moon? Because Obama Inc. killed NASA, killed the space shuttle and any successor vehicle, outsourcing space travel to the Russians and Obama’s big Tesla donor.

Charles “My main priority is Muslim self-esteem” Bolden, Obama’s  appointee, has said, no the moon. “I don’t know how to say it any more plainly,” he concluded. “NASA does not have a human lunar mission in its portfolio and we are not planning for one.”


A GUN IS A TERRIBLE THING TO WASTE

This is probably why he isn’t on a Senate intelligence committee.


A GARDEN SNAKE OR AN ANACONDA

The new wave of Egypt spin relies on admitting that yes Morsi and the Brotherhood abused power and marginalized everyone but the Islamists, but if they’re removed from power, they will become “radicalized”.

So the question is whether the Muslim Brotherhood is worse as a government or a terrorist group?


Is the Muslim Brotherhood Worse as a Terrorist Organization or a Government?


THE WIND IN HIS TEETH

John Kerry likes boats. He likes windsurfing. He doesn’t seem to be much good at foreign policy. Obama probably should have made a job for him like Secretary of Windsurfing. Or Czar of Yachting. Considering all the useless czars already out there, it wouldn’t have even stood out that much.

But Kerry seems determined to finish his career by doing the same useless things he did as senator while calling himself Secretary of State. One of those things is spending a lot of time on his boat. The other is lying about it.

Obama has a message for Egypt. “Leave the Brotherhood alone!”

“The administration has urged the Egyptian military to stop using heavy-handed tactics against the Brotherhood, according to two U.S. officials who asked not to be identified commenting on private communications. They said the administration is concerned that some in the military may want to provoke the Islamists to violence and provide a rationale for crushing the movement once and for all.”

Let’s try to understand the sick twisted mindset behind an establishment that supports Islamic terrorism.


FAREWELL TO THE FISHERMEN

The new gender-neutral references will now demand and enforce linguistically  ‘handwriting’ in place of ‘penmanship,’ and ‘signal operator’ for ‘signalman.’

‘There’s no good reason for keeping our legal terms anachronistic and with words that do not respect our current contemporary times,’ Kohl-Welles, the 475-page bill’s sponsor, told Reuters.

“Don’t you see that the whole aim of Newspeak is to narrow the range of thought? In the end we shall make thought-crime literally impossible, because there will be no words in which to express it. Every concept that can ever be needed will be expressed by exactly one word, with its meaning rigidly defined and all its subsidiary meanings rubbed out and forgotten. . . “


Washington Purges “Fisherman”, “Freshman” and “Clergyman” From the Dictionary