Islam is the Problem

On a mild London afternoon, two Muslims rammed a car into a British soldier returning to the barracks after working at the Tower of London. They shouted Allah Akbar and hacked and slashed at his body in an attempt to behead him. By the time they were done, his body could only be identified through dental records. 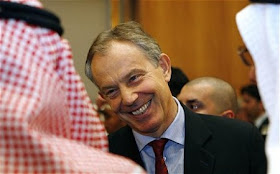 Shortly afterward, British Prime Minister David Cameron said that “there is nothing in Islam that justifies this truly dreadful act”. London Mayor Boris Johnson added, “It is completely wrong to blame this killing on Islam.”

Now former Prime Minister Tony Blair has thrown in his two pence writing, "There is not a problem with Islam. For those of us who have studied it, there is no doubt about its true and peaceful nature."

Blair previously claimed to have read the Koran every day, but apparently did not get as far as Chapter 5, which contains the verses that the Muslim murderers quoted after their butchery. And that’s understandable. Between his business deals with the Qatari royal family, which is behind much of the terrorism in the Middle East, the Kuwaiti royal family and the royals of the United Arab Emirates, it stands to reason that Tony probably never got past a few verses a day.

It’s easy to picture Tony Blair after a hot muggy day of clasping the greasy hands of Emirs and Sheikhs and trading his expertise for blood money, remembering to always eat with the right hand, not the left, returning to his five star hotel room, climbing into bed with his room Koran, flipping it open to the first chapter, reading, “In the name of Allah, the Gracious, the Merciful” and deciding that sounds peaceful enough, letting his head hit the pile of plush pillows and calling it a day. If Tony had made it as far as Chapter 2, where the Koran proclaims “Fight in the cause of Allah”, then the expert on Islam might have been able to entertain some doubts about its truly peaceful nature.

In what the Daily Mail describes as a “brave assault on Muslim extremism”, Blair writes, “There is not a problem with Islam... But there is a problem within Islam – from the adherents of an ideology that is a strain within Islam.”

It is rather sad that political bravery now consists of admitting that there may be some sort of problem within Islam and that it “is not the province of a few extremists... the world view goes deeper and wider than it is comfortable for us to admit.” Having exhausted all his courage by admitting that there is a problem somewhere within Islam, Blair bravely avoids admitting it by babbling about international affairs and the need to intervene in Syria.

Over in Afghanistan, Lee Rigby, the murdered soldier, might have been credited with a brave assault on “Muslim extremism”. Blair, writing a Daily Mail article that concedes that the problem may be a bit bigger than just that legendary tiny minority of extremists is hardly in that category.

Political courage now involves minimizing a grave threat less than all the other politicians who are also minimizing the grave threat. If the political consensus is that the mountain is nothing but a molehill, the brave pol courageously comes out and says that it’s actually a minor hill.

The purpose of Blair’s meaningless distinction is to contend that it’s not a structural problem with Islam, but some sort of aberrant mutation brought on by Western colonialism. The trouble with that is that it requires a willful refusal to address the actual text of the Koran and the entire body of Islamic history.

Even if we were to assume that the problematic “strain” of Islam is not universally representative, who exactly is Tony Blair to declare it so based on his casual readings of a book that contains more death threats per page than the Daily Mail’s comments section?

Governments are not supposed to define the nature of religion or pick and choose between various sects. And indeed the legality of declaring that one form of Islam is legitimate and another is not has frequently been challenged.

It is the role of Muslims to argue amongst themselves what is and isn’t legitimate Islam. Such an argument is currently being waged in Syria using the theology of heavy artillery and death squads. Perhaps Tony Blair should think twice before involving the UK in such an Islamic religious debate or trying to hold one at home.

No government should be determining what is and isn’t legitimate Islam. What they should be doing is addressing threats emanating from Islam. There is no need to study the Koran in order to understand those threats. Muslim terrorists have been willing to patiently explain that they are killing us in the name of Islam. We can take them at their word or, like Blair and Boris, foolishly argue the doctrines of their religion with them. 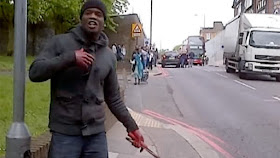 If Tony Blair returned home from Kuwait City with the Swine Flu, the authorities would quarantine him without making any fine distinctions as to whether there was something wrong with Tony or within Tony. Like the nature of the one true Islam, that is a metaphysical question that governments are not qualified to answer.

If the UK quarantines foreigners and even natives with the Swine Flu, which has killed far fewer Brits than Islamic terrorism, should it not begin quarantining the even more dangerous strain of Islam?

It was Blair’s government that brought the Islamic plague to the United Kingdom in large numbers as part of a deliberate policy to forcibly transform the UK into a multicultural paradise. That policy has led to constant killings by the affected and the spread of strains of Islam to non-Muslims like the two Woolwich attackers.

1 in 4 British Muslims said that the 7/7 bombings were justified. If 1 in 4 visitors from Pakistan were infected with the Swine Flu, there would be an immediate ban on travel from Pakistan. It may be time to apply the logic of the quarantine to stop the Islamic strain that Blair brought to the United Kingdom.
Daniel Greenfield at June 02, 2013
Share