Islam Did Attack Us on September 11

“Islam did not attack the World Trade Center — Al Qaeda did,” Mayor Bloomberg

From a technical standpoint, Mayor Bloomberg is correct. In the sense that all of Islam did not get together in four airplanes and fly them into the World Trade Center and the Pentagon. In that same sense, Japan did not attack Pearl Harbor, only a few hundred Japanese people did, under the command of the Japanese Air Force. So too, in that particular instance 19 Muslims, under the command of an international Muslim group hijacked the planes and killed over 3,000 people. But in the aftermath of Pearl Harbor, the United States didn't declare war on a few hundred Japanese pilots, or the Japanese air force. We declared war on Japan. 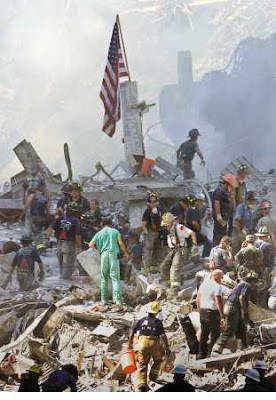 On 9/11, Al Qaeda did not act in the name of 19 people, or ten thousand or so followers. It acted in the name of Islam. And while anyone can claim to do anything in the name of Islam, Al Qaeda was not some random fringe group. Al Qaeda drew its ideological support from the Muslim Brotherhood, the largest Muslim political group in the world. It and its allies drew on financial support from the governments of some of the world's largest and most influential Muslim countries in the world, including Pakistan, Saudi Arabia and the UAE. These are countries which compromise some 200 million Muslims.

Those who dismiss Al Qaeda as unrepresentative of Islam, rarely like to talk about the support for its goals, only its methods. But the strong show of support for Al Qaeda's goals, demonstrates why it is a popular organization in the Muslim world. And Al Qaeda's goals are not non-violent, they involve the forcible application of Islamic law in Muslim countries that reduces non-Muslims and women to second class status. The vast majority of Muslims agree with Al Qaeda that America is the enemy and that the US should be forced out of Muslim countries. The majority agreed with pushing the US not to support Egypt, Israel, Saudi Arabia and Jordan... the endgame of which would be to allow Islamic groups to take them over. And finally the majority had positive or mixed feelings toward Bin Laden.

Most liberals would say that people who agree with the goals of the KKK, but disagree with some of its methods, are still KKK supporters. Yet they are unwilling to apply the same inevitable logic to the Muslim world, where the majority agrees with Al Qaeda's goal of political power for Muslims only, and few rights left for anyone who doesn't happen to be a Muslim man. That is a worldview that supports bigotry and tyranny, caning women and beheading men for offenses against Islamic law. And this is what most Muslims want to see enforced.

Western politicians like to talk about a "tiny minority of extremists" because it minimizes the size of the problem and saves them from having to make any tough choices. But that is not what we are dealing with here. Al Qaeda is not extremist in its goals. Not unless the majority of Muslims are also to be branded "extremist". Al Qaeda is a minority, because only a minority of Muslims are willing to risk themselves in a fight. But by that measure virtually any army is a minority, since the majority of the population would rather not go out and die.

Al Qaeda may not represent every single Muslim on earth, but the majority do support its goals. They may be a bit more squeamish about the methods, but then most of the Germans who voted for Hitler may not have been willing to go as far as the gas chamber either, but they supported the goals of the Nazi party. And that is what damned them. Al Qaeda's goals are just as ugly and hateful as those of the Third Reich. And indeed the Muslim Brotherhood, which served as its ideological grandparent, admired Nazi Germany.

A straight reading of the Koran shows that Mohammed and his followers acted in much the same way that Al Qaeda does. Mohammed made war upon non-Muslims in order to enforce Islamic law. He engaged in mass murder and terrorism. His men beheaded, looted, raped and assassinated men and women as part of their campaign of terror. And the Koran contains plenty of verses depriving non-Muslims of their rights and calling upon Muslims to murder them.

Al Qaeda employs technology and techniques unavailable to Mohammed, but they see themselves as carrying on his struggle. And it's hard to distinguish between them on a moral or ethical level. Western politicians may insist that Al Qaeda has nothing to do with Islam, but Al Qaeda derives from Islam. There is no Al Qaeda without Islam. 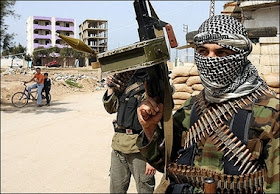 If Al Qaeda's goals were significantly at variance with Islam, it is common sense that they would have very little support in the Muslim world. Indeed Muslims would see them as enemies. But that is not quite the case. Al Qaeda is part of a rising Islamist tide, which seeks to create absolute Islamic states and a global Caliphate. When Muslims differ with Al Qaeda, it is on their level of commitment to Islam. Al Qaeda demands an absolute commitment to Islam that overrides all other values. It seeks a renewal of Mohammed's old war against the infidel. Al Qaeda's goal is a pure Islam.

Al Qaeda attacked us on September 11, but they did so in the name of Islam. And their precedent was over a thousand years of Muslim violence against non-Muslims. A violence that has its scriptural source in the words of the Koran. No individual Islamic terrorist attack or group can be detached from those words and precedents. The history of the Middle East did not begin in 1917 or 1948 or 1992. But while liberals insist on talking about the context for terrorism, they are unwilling to listen to any context broader than their own local politics. And what they are most unwilling to hear is that Muslim regional and global violence predates anything relating to the United States or any European countries.

Muslim violence emerges from the firm belief that only Islam can be allowed to rule. Al Qaeda is only one of many such historical attempts to enforce that through violence. That is why Islam did attack us on September 11. One and a half billion did not board four planes. But ideologies do not need to board planes, they have followers who are willing to carry out violence in their name. Until Muslims reform Islam, and abandon their allegiance to an Islamic law that imposes inferiority on non-Muslims, they cannot divorce themselves from Al Qaeda or September 11.
Daniel Greenfield at September 07, 2010
Share