The Day the Sky Fell

Tuesday. Another morning in downtown Manhattan. The canyons of the financial district swell with men and women in business suits, briefcases confidently swinging, a cup of coffee or a pastry dangling from one hand. Few of them were bothering to look up at the sky. They owned the sky. Despite the bombing of the World Trade Center that had come in the winter of 1993, or the much earlier, and now ancient bombing by left-wing anarchists on September 16, 1920, confidence was in the air. There had been a Dot Com bubble, but the worst was over. 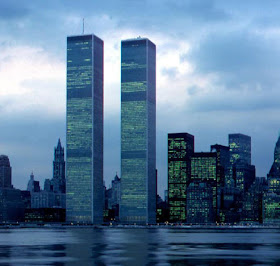 By subway entrances, hawkers in aprons shilled copies of the Daily News or the New York Post, more rarely Newsday. The news was simple enough. The New York Giants felt unappreciated. Mayor Giuliani vowed to overhaul the city's school system. New York City Opera was beginning its season with a production of The Flying Dutchman. Tom Clancy topped the New York Times paperback bestseller list with The Bear and the Dragon, a novel about the danger from Russia and China. The world as they knew it was coming to an end, but they had no idea. Just a shadow passing high above the sunlit towers. Just a shadow swooping down out of the sky.

Shortly thereafter amid the howling of sirens and crowds streaming across the Brooklyn Bridge and uptown to safety, amid the rain of falling ash and the unbelievable sight behind us-- came the simple revelation. The skies no longer belonged to us.

Our Soil, Our Sky, Our Blood


Subliminally we had known the day would come. We had acted out such spectacles countless times in movies, to dull the edge of the horror and make it palatable, adding happy endings to keep things simpler and cleaner. But we had denied it, just as we had denied history and destiny. We had treated any warnings as "Chicken Littles" crying that the sky would fall. And when the sky fell, we wondered who could have seen it coming.

But it was not the first time that Muslim terrorists had struck New York. It was only the first time that they had succeeded in causing so much death. We had let the media dismiss the first 1993 attack as the work of bunglers. We joined blow dried reporters in chuckling about the terrorist so stupid he tried to get back a deposit for a vehicle he had used in the attack. But we had forgotten what the attack really meant. That we were in the middle of a war. And in a one-sided war, the enemy does not have to be lucky every time. Just once. Just a few men with box cutters and some flight lessons. A plan that would have seemed absurd if it had failed, but a nightmare when it succeeded.

It is human nature to focus on petty complaints. The New York of that Tuesday morning was outraged over Mayor Giuliani's crackdown on petty quality of life offenses. By that afternoon even the dimmest yuppie had figured out that they were in the middle of a war, whose issues and implications made the rights of squeegee men to spray your car window and ask for change, something too small to be worth talking about. That shocking contrast was part of a dramatic transformation of the American consciousness by that metaphorical hole in the sky. 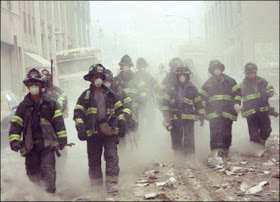 We knew the sky no longer belonged to us. Airline transportation which we had mostly taken for granted had become a weapon to be used against us. And anyone and anything could be next. We were at war. And some of us wanted to ask the men who had done this, what we could do to get our sky back. Others wanted to take it back by force, by destroying the perpetrators and using them to send a message. That our soil, our sky and our blood were off limits.

Our growing power had made wars into a distant proposition, fought on foreign valleys and beaches, across oceans to the west and the east. But power is limited not only by the reach of its wielder, but by the strength of his grip and the flexibility of his arm. We had reach, enormous reach. And great power. But our grip was weak and we could not make the blade go where it was needed. Our enemies understood that, even if we did not. And so we faced a new war. A war in which the enemy moved among us, played on our emotions, treated our decency as a shield, and our laws as a trench dug into the raw earth.

That Tuesday we faced a new world. A world in which the sky fell. And some of us rose to face the challenges. And some of us fled into the comforts of the Monday that had before, and all the days and years before it. Escaping history. Fleeing destiny. Forgetting that the world had changed, and no amount of politics as usual could make it stay the same.


When a nation loses its way and gives up on its own destiny, exchanging the birthright of its own exceptionalism for the porridge of self-amusement—it takes a collision with an unthinkable evil to remind it of its place in the world. Too many Americans had accepted the postmodern view of the world, one in which there was neither good nor evil, just a variety of opinions and viewpoints. That postmodern world seemed more comfortable with its welcoming non-judgmentalism and its disbelief in destiny. It was a world that did not ask anything of us, except to occasionally pretend that we care.

9/11 changed that. It tore down the sky and opened a gaping hole in the self-centered arrogance that had been the legacy of the 90’s, best exemplified by its champion, the morally ambiguous William Jefferson Clinton. It reminded us that we cannot just be satisfied with bread and circuses. That the world does not exist for our amusement. And that all views and beliefs are not created equal. That despite the ironic detachment of pop culture, there was a right and a wrong. And that despite the retreat from faith in a higher being, to a faith in our own technocratic castles in the sky, there was such a thing as good and evil. And not that we had forgotten that we were meant to be the good-- evil had come to pay a call on us.

With the fall of the Soviet Union, and even long before then, many Americans had ceased to believe that there was an evil out there. Only different views, governments and cultures. But in defeating one evil, a power vacuum had opened in which an old dormant evil could thrive again. And so it shall always be.

We had come to think of the “good life” as a natural and inevitable outcome of our own gifts and talents. But it requires more than that. It requires that we stand ready to resist those who would destroy it. On 9/11 we met our opposite, the mirror image of what we had allowed ourselves to become. Fanatics with a murderous faith, confronting a country that had come too close to forgetting its own. Destroyers attacking a civilization of builders. Barbarians besieging the gate of a civilization that had forgotten the sacrifices which had built their cities, and the price paid to raise up their walls. 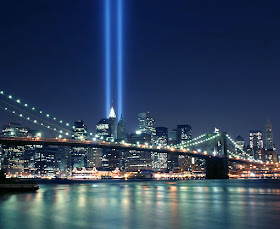 9/11 interrupted the culture of passivity with a warning and a challenge. Either we would defy and defeat evil anew, or it would consume us whole, as it had done to so many cultures and countries around the world. Our “good life” could not be seen as an unchallenged gift, but an inheritance we would have to fight for over and over again. There is horror in that, but there is also greatness. Because men and women are not uplifted by wallowing in comfort and plenty, but by testing their bodies and souls against challenges, and prevailing over them.

We were not made to be a nation of credit card holders and sofa cushion sitters, fast food eaters and spectator sports watchers. These things are part of the reward of wealth for the challenges that we have already overcome. But to take consumerism as a gift, rather than a reward, is to become debauched by it, as so many peoples have by wealth and plenty before us. We do not need to feel guilt for what we have, only guilt for forgetting why we have it. Because generation after generation fought challenges of every sort to win it for us. And if we allow ourselves to forget or to imagine that those challenges were only in the past, we throw away what they fought so hard to gain for us. Not mere wealth, but freedom.

9/11 was not only a call to arms, but a call to awareness. The awareness that what we have is not free, it must be paid for in generation after generation. There is no final victory and no permanent armistice. As long as human evil endures in the world, so long we must be prepared to fight against it. The latest phase of a very old war has come again. We can be uplifted by the struggle against it, or destroyed by the submission to it. The choice is ours. The consequences of that choice however will follow us across generations and to the end of time.
Daniel Greenfield at September 08, 2010
Share