Obama and the Religion of Popular Culture

It is a self-evident truth that religion may seem to be on the decline, but is always present within a society and a culture in one form or another. Secularization is not the decline of religion, but rather the decline of spiritual religion in favor of cultural religion that is simply background noise. Just as atheism, though it may lack a creator figure, forms of a belief system in a particular worldview and an accompanying set of values, so too religion is very much present in a secularized society. It is simply not religion as we understand it anymore, it is popular culture, and Obama is its key messianic figure. 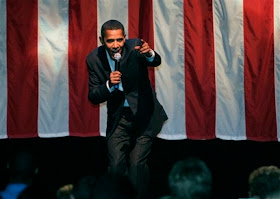 With the decline of institutionalized religion, popular culture has taken its place as a bearer of human mythologies and values that explains the meaning of life and the nature of proper behavior to the masses. Most traditional forms of religion understand this and view themselves as openly or covertly at war for the hearts and minds of their followers with popular culture. A war they are often losing as the movie theater has become the new church and the television screen, the new at home altar. And with that in mind, it is important to examine just what the values and beliefs of popular culture are to better understand the rise of Obama.

Fame - The most fundamental spiritual value of the Religion of Popular Culture is fame. Fame serves as both the "reward" for leading a life in tune with the values of popular culture, and as the expression of its one and only real achievement. Behind all the narratives of popular culture, is the keystone narrative of fame in which a man or woman become famous, known and adored by millions, which in turn justifies their existence.

Without any true afterlife, the Religion of Popular Culture uses celebrity as eternity. The afterlife of popular culture is the fame of the present, reflected in a collective memory of idols such as Elvis or Marilyn Monroe that transcends death, maintaining an incorruptible perfection of image for as long as their fame lasts... to provide popular culture's facsimile of immortality.

The nature of fame is not truly rooted in any value other than charisma and photogenics. Which essentially is what qualifies Obama so well for the job. The subtext of fame is that it all an illusion. The actors are reading lines from cue cards. The singers are lip syncing. The politician is reading from a teleprompter. The illusion is part of what makes fame insubstantial, and therefore magical. People with real accomplishments are less likely to be as enduringly famous, because there is less illusion and artifice to the entire process.

Like most religious acts, fame requires someone who inspires faith and a suspension of disbelief. Which is why criticizing Obama as a sham never yielded that much traction with his followers who are well aware subconsciously that he is a sham, an awareness that paradoxically inspires them to greater faith in him. It is the unreal figures who inspire faith from their devotees, more than the real ones. Which is why Obama's thoroughly phony life story in which his major accomplishment was to market himself had a great deal of resonance, while McCain's real life story in which he survived against the odds had none.

The key to understanding the theology of the Religion of Popular Culture is that it offers "ordinary people" a chance to become extraordinary by becoming famous, not through real accomplishment, but through fame itself. Essentially anyone can become a "golden god". "Yes we can." "We are the ones we have been waiting for." Phrases like this are the collective chant of empty people waiting to be filled by participating in the spectacle of fame. By contrast real accomplishment and hard work by McCain and Palin met with the reflexive hostility of people who do not want to be challenged or expected to accomplish something... but who want to believe that they can become famous for just being themselves.

That is the Religion of Popular Culture's Messiah in a nutshell. That is Barack Obama. The big O. The big zero. The man who is reducible to his logos and iconography. Who has no reality beyond the myth he has built around himself.

Morals - The Religion of Popular Culture does not have its own moral code, only moral attitudes. A moral code requires hard and fast moral values, which are the exact opposite of popular culture, which depends on trends to define itself. 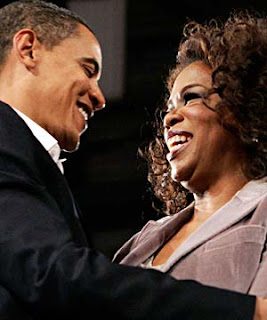 The Religion of Popular Culture is outwardly liberal, because like liberalism it is both perpetually against the status quo, and yet it is the status quo. Its narrative is rooted in the underdog, and yet it is in the hands of the uberdogs. It has enough understanding of the fundamental American myth to exploit it, without ever actually living by it. Because while the fundamental American myth depends on a temporary hero who steps out of the shadows long enough to do the right thing before receding into obscurity, the Religion of Popular Culture depends on men and women who are not interested in doing the right thing, but in being famous. This contradiction between the American myth that was put on screen and the celebrity culture created around its production has been bridged by Reality Television, which bypasses the American myth entirely, to treat celebrity culture itself as a new American myth, one in which obscure people become famous for no particular reason and then remain famous.

The Religion of Popular Culture does not have morals, only attitudes, because attitudes can change easily in reaction to new trends. And since the Religion of Popular Culture is always perpetually chasing the trend, and yet just behind the trend, it can easily adapt those attitudes to accommodate the latest trend. Where moral codes are absolute, moral attitudes are emotional and situational. They make it possible to be completely hypocritical in a morally absolute sense, while at the same time being completely self-righteous. Double standards and a lack of intellectual integrity have no meaning, because moral attitudes are presentational and situational, rather than adhering to any overriding moral code.

To argue with someone whose morality is derived from the Religion of Popular Culture is a futile task, because he or she has grown up with a sense of right and wrong that is presentational, that depends on the way it is put forward and on who puts it forward, not on any actual value system. In a presentational system it is possible to feel more sympathy for a murderer than his victim, if the murderer's case is presented more sympathetically. In this small screen conscience, empathy is a far more powerful determinant, than morality. To empathize is to partake of the criminal's worldview and in turn to shut yourself off to the victim's, or at best to argue that both sides have their points. Which is why liberalism has ably exploited the Religion of Popular Culture to push preemptive empathy for criminals and terrorists in order to trigger exactly this effect.

Obama's own shifting values, his inability to take a hard and fast stand, perfectly reflect this moral void in his followers. Like them, Obama has no morals, only attitudes, which are subject to constant revision based on his own interests. For Obama, as for the Religion of Popular Culture, the objective does not exist-- only the subjective. Experience and feeling always trump truth and hard facts. And factual or philosophical consistency is never an issue, only emotional consistency.

So Obama can oppose the War, send more troops to fight the War and then pull them out before the War is over-- without ever being subjectively inconsistent, because after all "He is Just Doing his Best". The Religion of Popular Culture does not reward intelligent decision making, rather it disdains it and cultivates bad decision making skills. Obama's decision making fits perfectly within a framework that rewards brashness and self-righteous speeches, over considered actions and goals.

Values - The Religion of Popular Culture values open-mindedness above all else, as it is the trait that is best suited to the constant pursuit of the latest trends. In order to be perpetually open to the latest trends, you must be open minded. In order to have the best chance of latching on to a relevant trend, you must also be "diverse".

The value system of the Religion of Popular Culture is just that shallow. It values openness, only to extent that this openness leans in the direction of the current trends, rather than against them. Like filter feeders, the devotees of the Religion of Popular Culture skim the water, sucking up whatever is going out with the tide. This is why the combination of self-proclaimed open-mindedness with childish intolerance is quite so pervasive. The flip side of being trendy, is to damn that which goes against the trend. This makes for a selective open-mindedness, in which the open-mindedness itself is a matter of projecting a positive self-image within a constantly changing culture.

Like virtually every liberal politician, Obama speaks incessantly about listening to people, yet makes it clear that he only hears what he wants to hear. When listening tours have become a commonplace gimmick for politicians looking to gather the facade of public support for their own political agenda, Obama cultivates his reputation for open-mindedness with fake town halls and closed door summits. 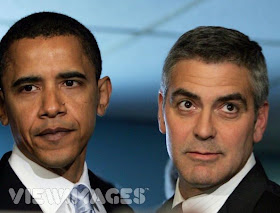 In an age where politics is dollar driven, the perception of appearing to listen to the public mimics democracy as a stage show farce, without actually partaking of it. Just as diversity has become shorthand for representation, another fallacious value of the Religion of Popular Culture that Obama has ably exploited, appearing at a Town Hall meeting has come to seem the equivalent of actually doing what the voters want you to do.

With these three elements we have summed up the essentials of the Religion of Popular Culture and how it impacts on American democracy and the rise of Obama, a man who fits perfectly within its narrative... going from obscurity to global fame based on nothing more than charisma and marketing, with a fluid sense of morals and value system that is capable of adapting, without believing, that is limited to the subjectivity of his most youthful supporters, and that insists on being everything to everyone because that is the avatar of the Religion of Popular Culture. The messiah of fame, the cardinal of reality television and the prince of the empty image-- Obama is the perfect product to be embraced by a secularized culture and a fluid fit for a value system and a moral code that are emotionally coded on the big and small screens. He is essentially the perfect bait for the followers of the Religion of Popular Culture and he has entrapped them all too well within his net.
Daniel Greenfield at December 16, 2009
Share