For six years the burning cause of the American left was the fate of the captured terrorists being held in the Guantanamo Bay detention camp. Civil rights lawyers, pundits and Democratic congressmen joined voices to denounce  military tribunals, detention of captured terrorists without access to their ACLU lawyers and of course that unholy terror of MSNBC commentators, waterboarding. And they got their way. 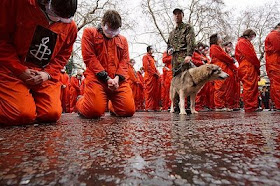 The Bush Administration, that for all its faults that had at least cared about protecting Americans against Islamic terrorism, under pressure from the courts gave in, and when the official candidate of Islamic terrorists, MSNBC commentators and ACLU lawyers took office, it was all over but the suicide bombings. Barry Hussein signed the order closing Guantánamo Bay, released many of its residents, and gave civilian trials to others. And thus far of the terrorists who have been released, one in seven has returned to terrorist activity. And that number likely underestimates the true picture by quite a lot.

In 2006 Thomas Wilner, the lawyer for a number of the terrorists, penned an emotional article for the Los Angeles Times calling Gitmo, an American Gulag and a living nightmare. Naturally of course all his Kuwaiti clients were innocent little lambs who just happened to be hanging around Afghanistan before being snatched up into the cruel and unfeeling maw of the US military industrial complex, inhumanly tortured and deprived of their humanity.

Two years later after his release, one of Wilner's innocent lambs, Abdallah al-Ajmi, hailed as the "Lion of Guantanamo" murdered 13 Iraqi policemen in a suicide bombing. Naturally instead of admitting that he had worked tirelessly to release a Jihadi terrorist from Gitmo, leaving him free to kill, Wilner instead blamed the US government for turning his formerly lamb-like client who had been picking flowers in the valley of Kandahar into a violent terrorist by imprisoning him in Guantánamo Bay.

This of course is the usual sort of thing that defense attorneys claim when their completely innocent clients who had previously torched an orphanage and bombed a bus full of nuns, are released and unsurprisingly go back to doing exactly what they were doing before. "It's the prison life that did it, your honor," the lawyers argue. "If only my client hadn't been caught and sent to the hole, he'd still be a lamb."

In 1980 many of the same liberals who fell in love with the Gitmo killers embraced a murderer and bank robber named Jack Abbott. They praised his literary skills and fought for his release. Norman Mailer helped publish his book. Susan Sarandon named her son after him. Less than two months after his release Abbott demanded to use a restaurant restroom. He was refused by the night manager. In turn Abbott stabbed the man to death. His defense was that his dehumanizing treatment in prison had made him incapable of acting in any other way.

But what had become a laughable defense to most Americans, was brushed off not just for Abdallah al-Ajmi or the other innocent lamb/terrorists of Guantanamo Bay who went back to their old profession once they were shipped back to Yemen, Kuwait or Russia-- but for Islamic terrorism in general. It is the most common defense used on behalf of Palestinian Arab terrorism, when every charge is met with, "But what choice do they have. Israel built a wall and imprisoned them. They're only responding to the dehumanization inflicted on them."

The presumption behind this defense is that the terrorists are always innocent victims and their terrorism is the consequence of oppression by their targets. An argument often accompanied by the W.H. Auden citation from his poem September 1, 1939; "I and the public know, What all schoolchildren learn, Those to whom evil is done, Do evil in return."

Often those quoting the stanza remain unaware of the poem they are quoting from, and its awful relevance. September 1, 1939 was the date of Hitler's invasion of Poland. The previous line that is generally left out by the bleeding hearts who cite Auden, "What huge imago made, A psychopathic god" is of course a reference to Hitler. Even with German troops marching into Poland, Auden still hid Nazi Germany behind the rhetoric of victimology, painting the Nazi forces as much victims as oppressors. 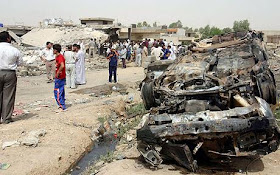 But it might be just as well to draw from W.H. Auden's poem, Spain, written in support of the Soviet Union's work in the Spanish Civil War. "To-day the deliberate increase in the chances of death, The conscious acceptance of guilt in the necessary murder." The necessary murder of course is that murder which must be committed in the name of a cause, as differentiated from imperialist murders which are committed to stop the people who are committing murders in the name of a cause.

The suicide bombings of Muslim terrorists today, like the Red Terror, are one of those necessary murders being committed by the Jack Abbotts with beards and keffiyahs running around the world today. After 13 dead in Mosul whose families he has never visited, his lawyer of course has no regrets. "Guantanamo took a kid -- a kid who wasn't all that bad -- and it turned him into a hostile, hardened individual," Wilner said. The kid in question being Abdallah al-Ajmi, a Jihadist who had tried to fight in Chechnya and then Afghanistan, threatened his own lawyer and on release, went to fight in Iraq and murdered 13 Iraqi police officers.

The real story of course as always is behind the scenes. Thomas Wilner and his prestigious law firm, Shearman & Sterling, are not some gang of bearded radicals huddling in an East Village basement office. They're a prestigious law firm whose bill was footed by the Kuwaiti government. Shearman & Sterling did not simply have managing partners like Wilner represent captured terrorists, they launched a massive lobbying campaign on their behalf.

Shearman & Sterling did far more than just write legal briefs and shuttle down to Gitmo to conduct interviews about alleged torture for the BBC. In addition to its legal services, the firm registered as an agent of a foreign principal under the Foreign Agents Registration Act of 1938 (FARA) as well as the Lobbying Disclosure Act of 1995 (LDA) to press the Kuwaiti detainees' cause on Capitol Hill. Shearman reported $749,980 in lobbying fees under FARA for one six-month period in 2005 and another $200,000 under the LDA over a one-year period between 2005 and 2006. Those are the precise time periods when Congress was engaged in intense debates over the Detainee Treatment Act and the Military Commissions Act, legislation which Shearman & Sterling and its Kuwaiti paymasters hoped would pave the way for shutting down Guantanamo permanently and setting their clients free.

Mr. Wilner, a media-savvy lawyer who immediately realized that the detainee cases posed a tremendous PR challenge in the wake of September 11, hired high-stakes media guru Richard Levick to change public perception about the Kuwaiti 12. Mr. Levick, a former attorney whose Washington, D.C.-based "crisis PR" firm has carved out a niche in litigation-related issues, has represented clients as varied as Rosie O'Donnell, Napster, and the Roman Catholic Church. Mr. Levick's firm is also registered under FARA as an agent of a foreign principal for the "Kuwaiti Detainees Committee," reporting $774,000 in fees in a one year period. After the U.S. Supreme Court heard the first consolidated case, the PR campaign went into high gear, Mr. Levick wrote, to "turn the Guantanamo tide."

In numerous published articles and interviews, Mr. Levick has laid out the essence of the entire Kuwaiti PR campaign. The strategy sought to accomplish two things: put a sympathetic "human face" on the detainees and convince the public that it had a stake in their plight. In other words, the militant Islamists who traveled to Afghanistan to become a part of al Qaeda's jihad on America had to be reinvented as innocent charity workers swept up in the war after 9/11. The committed Islamist who admitted firing an AK-47 in a Taliban training camp became a "teacher on vacation" who went to Afghanistan in 2001 "to help refugees." The member of an Islamist street gang who opened three al-Wafa offices with Suliman Abu Ghaith (Osama Bin Laden's chief spokesman) to raise al Qaeda funds became a charity worker whose eight children were left destitute in his absence. All 12 Kuwaitis became the innocent victims of "bounty hunters."


The entire article is worth reading if only for the purpose of understanding how the real War on Terror was lost through domestic collaborators hired by the same oil rich gulf states behind Al Queda.

What was novel then, has long ago become mainstream. Gitmo terrorists are being released as fast as anyone can find a place for them, many of them have returned openly to terrorism. Every major magazine and newspaper has already run sympathetic stories about the detainees, usually more than once. Melody Barnes, Obama's Director of the Domestic Policy Council, is a former Shearman & Sterling lawyer. 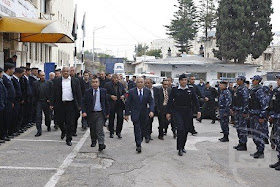 In Israel last week, Rabbi Meir Chai, a teacher and father of 7, was gunned down on the road. One of his killers was Anan Sabah, a Fatah terrorist released from prison by an Israeli amnesty in order to promote "dialogue" and strengthen Fatah leader, Mahmoud Abbas. The prisoners were required to sign a statement promising not to be terrorists anymore, and were set free en masse, overriding objections from the Terror Victims Association which warned that, "The prisoner release is a foolhardy move that gambles with the lives of Israeli citizens".

We know how that gamble turned out. We know how they always turn out. And now after Israel hunted down and killed Sabah, the Obama Administration is demanding "clarification" accusing Israel of carrying out executions of the terrorists. Adnan Sabah, who had been released from prison on the promise of not engaging in any more terrorism, continued shouting, "Allahu Akbar" until the last.

Palestinian Prime Minster Salam Fayyad in turn attended the funeral and wake for the terrorists, PA Interior Minister Said Abu Ali, security forces General Commander Hazem Attallah, Preventative Security chief Ziad Ar-Rih, intelligence head Majed Faraj... essentially the entire Palestinian Authority security apparatus, along with 20,000 of their terrorist militia members. An all too clear demonstration that the murderers of Rabbi Chai were their creatures and that Fatah stands behind them. Just as the Kuwaiti government's funding of Shearman and Sterling's campaign on behalf of the captured Kuwaiti terrorists at Gitmo had demonstrated its own ties to Al Queda.

Meanwhile the terrorists find no shortage of sympathizers, acting for pay or pro bono, who cry, "Let My Terrorists Go". And sooner or later the politicians listen. And we pay the price.
Daniel Greenfield at December 27, 2009
Share