Why Israel is Losing the Military and Media Wars

Every now and then bewildered Israeli politicians and outreach professionals call conferences to wonder why the Hasbara is failing and why Israel can't get its story across. They are given the usual advice of hiring more PR firms, finding innovative ways to get the message through, using the internet in smarter ways and of course that all time favorite, rebranding Israel. Naturally they follow this advice, only to call another conference a year later wondering why nothing has changed. 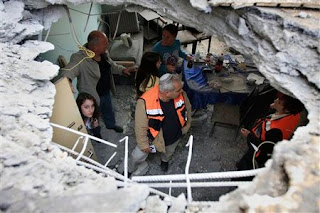 The answer is simple enough. Defensive PR, like defensive warfare, never works. And Israeli PR and Israeli warfare has been on the defensive for decades now. If you break down Israel's message to a single sentence, it's "We didn't do any of the things we're accused of." That is the kind of message you expect to hear from criminal defendants, and it's a message that impresses no one. The only thing it does is produce a debate about the validity of the accusations themselves, which is to PR what Stalingrad was to the Russian front.

The recent Aftonbladet case represents a classic scenario that demonstrates why Israel's defensive PR is doomed to fail over and over again. The Swedish tabloid Aftonbladet published an article claiming that Israeli soldiers were killing Palestinian Arabs in order to harvest their organs. The Israeli government pointed out that the article presented no evidence whatsoever, that no such thing had ever happened and demanded a retraction from the newspaper and condemnation of it by the Swedish government. The only thing Israel accomplished was to popularize the false allegation thus creating a debate over whether or not Israeli soldiers kill Palestinian Arabs to harvest their organs. Pleased by his newfound fame, the author of the article has only escalated his allegations and gone on to do a tour of the Arab world. Leftist propagandists can only watch the fallout and chuckle, because once again Israel has been suckered into playing the mug's game of defensive PR.

Defensive warfare of any kind is reactive. For the last few decades Israel has run itself ragged because it has been reactive. And by reactive I mean that Israel keeps responding to attacks against it, rather than taking the offensive. In the Six Day War, Israel responded to Nasser's planned assault, by preempting him and taking the offensive. The result was Israel's finest hour. In the Yom Kippur War, Israel waited and watched, and was nearly destroyed.

Few nations can afford to be purely reactive and play defense alone, Israel least of all because it is outnumbered by larger and more numerous enemies who can wear it down through sheer brute force. And that is exactly what has been happening on both the media and the military front. The terrorist campaign, planned, financed and executed first by the USSR, and then by the Arab and Muslim world, has worn out Israel both militarily and politically.

Israel's greatest asset was its innovation, its mobility and brilliance. Qualities that are best employed on the offensive. Instead Israel has been restricted to the defensive, constantly retreating, giving up both physical and ideological territory to its enemies, while wondering how much to give up in order to stem the bleeding. Which is the one reaction certain to put it even further on the defensive.

Israel wants a solution to the conflict. So do its enemies in both Islam and on the left and far right. A final solution. Each attempt by Israel to offer a solution has only brought Israel closer to that final solution. The more Israel has tried to show its goodwill, the more it has gotten stuck on the defensive. The goal of successive Israeli governments is no longer to be a great nation or a strong nation, but to be a nation that everyone likes.

The fallacy there is that "everyone" consists of a billion Muslims and a sizable number of leftists who view Israel's very existence as an insult to their deeply held beliefs. And then there are the Western business interests who think Ahmed would be much friendlier to them if Israel weren't in the way. And Russia which cultivates wars in the Middle East the way gardeners cultivate flowers. Finally there's the rest of the world which isn't too keen on embracing losers who keep apologizing for their existence and cutting their own country to pieces in order to win the favor of the terrorists trying to wipe them off the face of the earth. 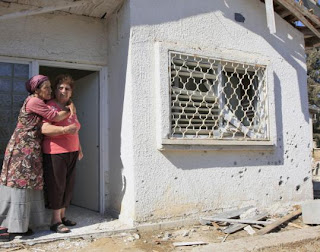 To boil down the problem simply enough, the more Israel goes on the defensive, the weaker it becomes, not just militarily, but politically as well. Reactive conflicts are hugely draining. They require endlessly watching for an attack and then trying to counter it. The advantage in such a scenario is always to the attacker who has more lead time to plan an attack, and room to retreat if the attack fails.

Strike and vanish into the desert, and then strike again, was the classic raiding strategy of the Arab bandit, including a charming head chopping fellow named Mohammed. The British General Orde Wingate, who helped pioneer much of the doctrine of the future IDF, responded to such attacks in the mandate era, by taking the battle to the enemy with small, fast moving and mobile units. To go on the offensive.

The following section from the official Wingate site says it best;

While impressed with the devotion & willingness to sacrifice in the Haganah, Wingate was exasperated by the defensive nature of the Jewish forces. He realized that they could not halt the violence with their defensive tactics of fortified settlements. The policy of restraint meant the Haganah was ceding the initiative and mobility to the Arab guerillas.

The British were trying to balance an active defense with mobile sweeps & strikes, with holding important static positions in order to maintain effective government control. Mobile columns & patrols were sent out to deny the rebels any sanctuary and to hunt them down. They became consistent and routine in their movements and their actions. With the enemy often indistinguishable from their civilian base and troops often quartered near Arab civilian areas, "it was very difficult to keep operations conducted in a largely hostile civilian milieu secret, and so the element of surprise was lost; at the same time, reliable information about the enemy was hard to come by."

Commented one Jewish official on a big sweep by British forces, "They marched over hills and valleys, and in the end emerged with some rusty Turkish pistols and a few empty rounds of ammunition...The Arab gangsters just hid their arms and mingled with the population of the villages. Not only did the huge British army find absolutely nothing, it discredited and ridiculed itself in the eyes of the whole population." In 1938 General Archibald Wavell, the temporary acting commander of British military forces in Palestine, was forced to admit these and other actions such as aerial bombing had only "a temporary effect."

"There is only one way to deal with the situation, to persuade the gangs that, in their predatory raids, there is every chance of their running into a government gang which is determined to destroy them, not by exchange of shots at a distance, but by bodily assault with bayonet and bomb." This new unit was to carry the war to the enemy, taking away his initiative and keeping him off-balance. And so it was, "to produce in their minds the belief government forces will move at night and can and will surprise them either in villages or across country." The force would be a mixed British-Jewish one operating under his command, moving primarily at night in areas of guerilla activity with the allies of the night: deception, surprise, shock.


Since then Israel has forgotten Wingate's lessons that helped make the IDF into the fearsome force that it was. Instead Israel has reverted to the fortified settlements and cities, the home guards maintaining watch... as well as the British assault teams thundering across the desert in a spectacular show of force that accomplishes absolutely nothing. And this applies not only to Israel, but to the United States post-2004 as well. 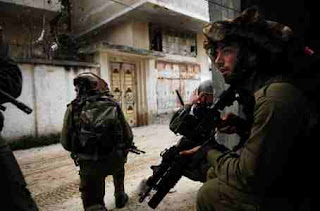 You cannot win through defensive tactics. You can only bleed. And Israel is bleeding badly. The nation that once executed Entebbe, rescuing hostages on another continent, can no longer even rescue one of its soldiers held captive within its own borders. The country that was once hailed as a symbol of rebirth has been internationally demonized. And the worst part of it all is that Israel sat back and let it happen.

Israel is too small to be able to keep on bleeding indefinitely. Its soldiers and citizens have tired of always being on watch, and always waiting for an attack. Its citizens and its defenders around the world are tired of being expected to answer increasingly outlandish charges. This cannot go on forever. Israeli leaders understood this, but they drew the wrong lesson, determining to go even further on the defensive by cutting deals with the enemy. They were wrong. Disastrously wrong.

To survive against larger enemies, a small country must be quick, it must be feared, it must use surprise and cultivate an aura of inhuman abilities. Israel used to be all of these things. Now it is none of these things. But if it is to survive, it must become those things again.

The media war against Israel, the lawfare and the other various non-military tactics require an investment of resources. For those resources to be worth investing, there must be a visible payoff. The more Israel stays on the defensive, and its enemies make territorial and political gains, the more those tactics seem to be paying off. Reverse that scenario, and the resources will be reinvested somewhere else because they are not achieving tangible results. 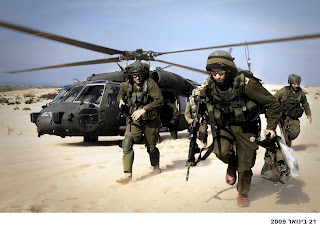 The Oslo Accords did not lessen the global demonization of Israel. Instead after a brief honeymoon, it significantly worsened it. That is because the propaganda war was closer to achieving its purpose. The more Israel has compromised, the worse its international status has become. That is because by compromising, Israel demonstrated its weakness to both its enemies and allies, emboldening its enemies and making its allies reevaluate its ability to survive. The more Israel has gone on the defensive, the worse the terrorism and the demonization has become. That is only natural. If you retreat, the enemy's fire will increase in severity.

To many Jews and Israelis, and sympathizers with Israel as a nation battling Marxist and Islamist terror, the problem seems impossible. The political and military situation is a Gordian Knot of tangled complexities. Which is why it takes an Alexander or a Wingate to cut the knot. Israel's media and military problems are born of a defensive strategy that have allowed the country to be tied into a Gordian Knot. To survive Israel must go on the offensive to cut the knot and save itself, or be choked to death by the rope its enemies have tied around its neck.
Daniel Greenfield at September 22, 2009
Share