The advance promotion and interviews for Michael Moore's latest agitprop movie, Capitalism: A Love Story are well underway. The message of the movie, produced and distributed by the millionaire capitalists at Paramount, the Weinstein Company and TCI cable company spinoff Overture Films has as its message, what else but the evils of capitalism. Capitalism you see is bad, except when it's good. 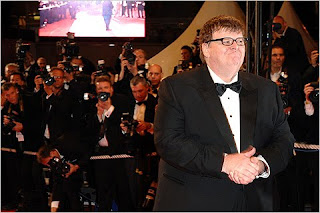 The Weinstein Company, the production company behind Capitalism: A Love Story, does have its reasons to be down on capitalism. After leaving behind Miramax, the company they sold for a cool 70 million to Disney, the Weinstein Company has not been faring too well in the free market. Capitalism requires actually getting people to give you money in exchange for your products and services. And the Weinstein Company's biggest success up until this year was another Michael Moore screed against free market health care, Sicko. Now the Weinsteins are hoping to cash in with Capitalism: A Love Story in order to bring in new investors so that their company can continue its capitalistic existence.

It's of course easy enough to point out the irony of millionaire businessmen and entertainers preaching against capitalism as if they were radicals squatting in abandoned basements, not living in Moore's Upper West Side Manhattan apartment. And Michael Moore climbing up on his high horse to contend that "Capitalism is evil" and that it has to be replaced, is particularly ironic when you consider the message comes from a man who made millions hypocritically preaching slogans just like that to college students, while using the money to build up a portfolio of Haliburton, pharmaceutical, defense and oil company stocks.

What is particularly wonderful about Michael Moore's portfolio is that there is hardly a corporate field that he hasn't inveighed against... and invested in; thus letting him make money from condemning defense companies, Haliburton and the pharmaceutical industry, and earn money from investing in them at the same time. In the corporate world this sort of thing used to be called, synergy. Michael Moore can rant about the evils of war, free market health care and oil companies... and then invest the millions made from box office and book sales into those same companies. Because Michael Moore in the end is one thing above all else, a capitalist.

When Michael Moore shouts that the wealthy want all our money, he does know what he's talking about. After all the writers who worked on his TV show have gone into detail about how Michael Moore tried to deny them Writer's Guild standing and residuals, demonstrating that Moore put all his research into union busting to good use in the office. But that is par for the course for Moore, who denounces the rich for making money, sending their children to private schools and oppressing the workers-- only to make money, send his own children to private school and oppress his own workers. 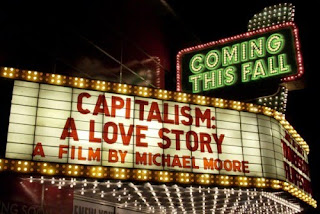 When Michael Moore travels around the world with a team of bodyguards delivering paid lectures on the evils of making money,the obvious question becomes, is Michael Moore a self-hating capitalist or a hypocrite? The answer, like most of the left, is a little of both.

The left's anti-capitalist rhetoric after all is based on capitalism. Can anyone imagine the modern left without Woodstock, the Ford Foundation or George Soros? When you shove aside the populist distractions the roots of the left are just as corporate as anyone. Even the Communist Part of the United States has its investments and stock portfolios. And as the Obama Administration's corruption reminds us, the left is certainly not a non-profit organization.

It's possible to debate whether or not Al Gore believes in his own global warming alarmism, but he certainly doesn't live it. Instead his lifestyle of jet plane trips around the world and his hefty mansion are just the tip of the iceberg of a huge fortune, most of it made from turning his global warming cause into corporate bucks, Cap and Trade is the very embodiment of how the left fuses anti-capitalism with capitalism, making money trading futures created by penalizing people and companies who produce carbon emissions.

Similarly Michael Moore may talk about "dividing the pie equally", but his actual charitable contributions have been scant at best. And Michael Moore isn't about to share the proceeds of his films alike with the editors, grips and staffers and hundreds of other people involved in bringing his movies to theaters. Instead Moore pocketed half the gross for Sicko himself, in an upfront deal worthy of a true capitalist. And it's safe to assume that he has just as good a deal this time around, or an even better deal, in which he stages scenes with sympathetic or unsympathetic people, ladles the carefully edited result out for the public at 10 dollars a head, and pockets the profits.

Capitalism: A Love Story will be making money for Moore, the Weinsteins, John Malone of Liberty Media's Overture Films (who ironically enough sits on the board of the meta-capitalist Cato Institute) and Paramount's executives and stockholders. It will make that money by selling anti-capitalist sloganeering to leftists, college students and people too stupid to know any better... by a man who plays a radical on the big screen, and a traditional bloodsucking profiteer off it.

But the underlying story behind Capitalism: A Love Story is about far more than Wall Street, it's about the way that the left profits from slamming capitalism. Moore, like his former employer Ralph Nader, follows in the great tradition of demagogues who rise to fame by claiming to stand up for "the little guy". For the left such demagoguery can be a reliable way of making money while retaining their radical cred. And even more so for the left, anti-capitalist regulations is a get rich scheme for lawyers, bureaucrats and their corporate friends, who are always ready to hitch something like Cap and Trade to the anti-capitalist wagon.

Michael Moore's form of capitalism is Leftonomics, in which money is made not from success, but from denouncing the success of others. Moore is the court jester of the Democratic party, acting out a working class charade in a party of limousine liberals insecure about their own wealth, providing the propaganda tools to connect their agenda with the manufactured working class outrage peddled by a grotesquely obese millionaire, who without the flannel and lazy grooming could easily pose for the moneybags toting capitalist villain of a 19th century socialist cartoon. And the cause he agitates for, government regulation and centralization, continues the process his career has been built on, taking from the sons and daughters of the middle class to give to the progressive rich. Capitalism you see is bad, except when it's good for enriching the left.
Daniel Greenfield at September 23, 2009
Share