The media is praising Obama for chairing a UN National Security Council summit at which everyone agreed that the world would be better off without nuclear weapons... someday. This groundbreaking achievement parallels similar UN conclusions that the world would be better off without poverty, hunger, war and other ills... someday. In the present day however, the UN has once again sidetracked a specific problem with a general prescription. That is par for the course for pushing general disarmament, when the problem is that specific nations which could not be named at the UN are working to create nuclear weapons with the intention of distributing them and using them. 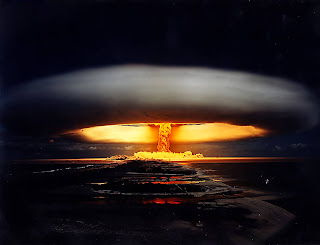 While it would be very nice indeed to have a world without nuclear weapons, the door to that Utopian nuclear free realm closed on August 5th, 1945. It has not and will not reopen since, short of the coming of a new technological dark age. Once something can be done, it will be done by others. It is not possible to remove nuclear bombs, nerve gas, mines, dynamite, revolvers, swords and stone clubs from the arsenal of humanity's technological know-how. And while some of these are uglier than others, all weapons are ugly, some are only ugly in intent. Nuclear weapons remain at the far end of the spectrum because they have few legitimate military purposes, they are all-encompassing weapons of mass destruction to be used with catastrophic results. They are weapons of mass death or mass genocide.

But at the same time diplomatic disarmament approach is worse than folly, because if the United States and even Russia may want to put the weapons back in the box as toys for the homicidally insane, that only makes them more appealing to homicidally insane states. The Western fear of nuclear weapons paradoxically makes them extremely appealing to brutal totalitarian regimes like Iran or North Korea, giving them an inflated sense of power vastly beyond their actual military capabilities. The premise behind diplomatic disarmament is that fallacious chestnut about people everywhere wanting the same things we do. The problem is that isn't true.

Some people don't at all want the same things we do. Some of them want entirely different things altogether. WWII demonstrated the truth of that in all its abiding horror, but those lessons continue to go unlearned by Western leaders who still seem to believe that all it takes is getting the world to sing together, which would work better if the tune they didn't insist on is "Give Peace a Chance" while their enemies picked the "Horst Wessel Lied".

Nuclear disarmament, like most forms of disarmament, remains a pacifist vision. Most countries who have weapons are willing to endorse it, but only fools would actually practice it. That is because every weapon is also a deterrent, and we live in a world in which deterrents remain necessary. While nuclear weapons are horrifying, they are only horrifying when they are used. Which means disarmament is primarily an issue for those who would use them, or pass them along to those who would. 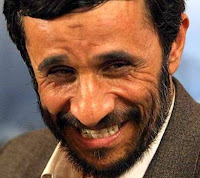 The world's inability to do anything about Kim Jong Il's nuclear ambitions helped create a pipeline through which nuclear technology passed on down the line to Islamic states, where it's only a single degree of separation before they end up in the hands of terrorists. Pakistan's nuclear arsenal makes that likely for Sunni terrorists. Iran's own nuclear development will be the final step for Shiite terrorists. When that link is finally closed, terrorists will have the ability to kill millions, not thousands. And whether those weapons are used against Israel, the United States, Australia, France or all of the above... is only a question of circumstances and timing.

During the Cold War, it was understood that we could not turn back the clock on the USSR's nuclear arsenal. Instead we implemented a policy of MAD, Mutually Assured Destruction for either side in a nuclear exchange. We placed our bets on global destruction to serve as a deterrent to nuclear war. It was an awful bet to take, but after two generations, the bet was won, and everyone breathed a sigh of relief. Our luck had held.

But will it always hold? Living under MAD often had a negative effect on the American psyche, and it provided fodder for the anti-war movement, and for pacifists to characterize the US military posture as insane. And they were not entirely wrong. MAD was a defensive response that gambled daily with the lives of every American in the hopes of outwaiting the USSR. But there is no outwaiting all of Islam.

MAD was premised on an enemy that understood the consequences of a nuclear war and controlled enough territory to not wish to face them. The next generation of MAD would take place against terrorist groups that do not control any actual territory we can strike, and against regimes that think of themselves as invulnerable thanks to Allah's guiding hand. MAD was useful against nations that were evil, but sane, and determined to survive. The nuclear threats of tomorrow will come from nations and factions that are evil, but not sane, and do not necessarily care whether they live or die.

21st Century Islam has made the suicide bomber its statement of choice. Whether exploding in a crowd or flying a plane into a skyscraper, martyrdom has given Islamic homicidal and genocidal mania the facade of religious nobility. And no one has yet tested how far that mania may stretch. During the closing days of WW2, before the US dropped two nuclear bombs on Japan, its leaders were seriously considering using their non-productive women and children as either human shields or culling them altogether to preserve wartime productivity. Such plans are a disturbing reminder that our enemies do not think the way we do, and that we cannot presume their moral limits to be anywhere within our own.

So then what can we do? Universal disarmament remains a pacifist's pipe dream. MAD is insufficient at best, and highly dangerous at worst. Furthermore it presumes that the enemy is unwilling to die, and that he believes that we are willing to kill his people by the millions. American foreign policy if anything gives the opposite impression. That leaves us with few options. We can try to develop a system that will make nuclear weapons irrelevant, but no such system exists. Missile shields may prevent large scale nuclear war, should they be successfully implemented, but no such shield will stop a suitcase nuke going off in Downtown D.C. 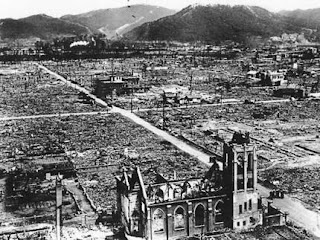 All that remains is to stop a nuclear weapons program before it produces its deadly results. The only successful form of disarmament, is disarmament by force. Had we applied that to North Korea in a timely manner, the world wouldn't be facing the current shocking wave of nuclear proliferation. If we don't begin taking action now, nuclear weapons will be sold and traded on the black markets of the Third World tomorrow, the way Stinger missiles are today. And then the death toll will make 9/11 seem utterly insignificant,

The ultimate question is do we let a serial killer stockpile weapons in his attic, and wait until he actually walks into a shopping mall and opens fire, before we do something about him. The current mindset is to wait and see. And so we've been waiting and seeing. We waited while North Korea developed nuclear weapons. We waited while Pakistan developed nuclear weapons. We're waiting while Iran develops nuclear weapons. What we're really waiting for, is for the day when those weapons are actually used. A day that our waiting is bringing ever closer, day by day.
Daniel Greenfield at September 26, 2009
Share