Last year, President Xi Jinping announced that Communist China was going to go carbon neutral by 2060. Like every Communist 5-year-plan, it began with lies and ended in disaster.

The 14th Renewable Energy Development Five Year Plan would have China dominate the green energy industry and increase its share of non-fossil fuel energy from 15% to 20%.

That was last year. This year, China is importing American coal to keep the lights on in its cities. 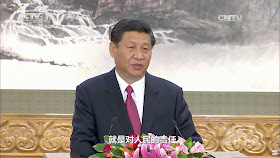 China's desperate buying spree has sent the price of lignite coal, the dirtiest coal, up from $20 to $120. While Democrats are trying to destroy coal in America, our shipments of coal have increased 30 times making China our second biggest coal market.

And we have the “green energy” of the reds to thank for it.

Red China made no grand commitments to green energy, but even its 5% shift may have proven disastrous. So-called renewables are dangerously unreliable because they shift with the natural cycles of wind, sunshine, and tide. The same phenomenon leading to power outages in California has brought China, which has a much bigger population and industry, to its knees.

Going green in China is less likely to mean wind and solar than hydroelectric. That’s a wise decision because hydroelectric power is more reliable and efficient than wind and solar, but as a water empire, the Communist regime should have reckoned with China’s history of droughts.

China’s green strategy depended on hydropower and the droughts have left it powerless. And its hydropower is anything but environmentally friendly. Mao used dams to revive the water empire strategy of the ancient emperors allowing the Communist regime to starve entire regions of the country and to undermine neighbors like India. The massive number of dams in China, a totalitarian program to enable mass murder, were environmentally devastating before being revamped as “green energy” hydropower. Green energy, as usual, has its roots in genocide.

But the vast majority of China’s hydropower plants are so useless that the regime has been shutting down tens of thousands of them. The environmental damage from Mao’s dam program destroyed enough bodies of water that there’s no more hydropower to be gained from them.

That is the real face of China’s “green energy”: a genocidal environmentalist boondoggle.

Like their Soviet Communist counterparts who reported 96% successful wheat harvests even while the peasants starved, Chinese Communist officials were pressured to fake numbers for the hydropower projects to prop up Xi’s international green energy commitments. As the droughts devastated hydropower capacity, Communist officials responded with drastic power cuts that are harming Chinese industry, its exports, and even killing people with rationing.

As the hot summer surged, China desperately began searching for coal overseas to prepare for the coming winter. The Communist regime scrambled to conduct industrial triage, banning bitcoin miners and cracking down on online gaming, officially for social welfare, but really as a desperate effort to reduce power usage in a country with a booming internet culture.

China, like California, is desperately rationing energy. Some places are only allocated a few days of power a week. Part of the supply chain disaster wreaking havoc on American consumers is actually originating at the source with some Chinese factories only being given power for a day or two leaving them unable to manufacture products or fulfill orders.

Even while Chinese propaganda touts new skyscrapers and bizarre bridges, its cities are going dark and the residents are buying candles. It’s not unusual for Chinese drivers to navigate evening roads with no lights and for Communist officials to urge people to open their windows instead of turning on air conditioners and to use “natural light” instead of electricity.

Worsening the green energy disaster is China’s Communist hostility to a market economy which made it impossible for utilities to use price signals and cope with the demands and shortages. China’s electric rates are capped leading to the same results as in South Africa’s socialist power grid in which the utilities would go bankrupt providing more power when coal is too expensive.

But China’s Communists, like Soviet Communists, can’t escape market economics. The power shortages are leading to price hikes for products, decreasing exports, and a lower growth rate. It’s also causing Xi’s regime to aggressively threaten Taiwan after consolidating control over Hong Kong as the Communist dictatorship tries to project strength and plots to seize the wealth of other nations, like Taiwan, to compensate for the domestic failures of the corrupt regime.

When Kerry, Biden’s climate czar, headed off to China to plead with the regime to cut back on its use of coal, the Communists humiliated Kerry and read off a list of demands, including an end to sanctions on its slave labor solar panels. Kerry dutifully returned once more from Asia spouting the Communist propaganda of his hosts and once again he was taken for a ride by his captors.

Xi couldn’t cut the use of coal even if the world were ending because it would end his regime.

China survived the counter-Communist revolutionists that toppled the USSR and its satellites because it was able to offer the benefits of consumerism, from smartphones to sodas, to a people who were a generation away from planned government famines. The Communists traded enough of their ideology to survive. They won’t doom themselves for environmentalism.

Xi’s crackdown on Chinese big industries, the threats to big internet companies, its entertainment industry, and its tycoons is not a show of strength, but a sign of weakness.

The Communist regime is anticipating trouble and is going to the mattresses, consolidating control over companies and the culture to be able to ride out a crisis that it expects will be much bigger than the pandemic. As Xi’s regime panics, green energy may end up on the kill list.

China’s dam obsession wrecked its rivers and as the past year has shown, it cannot expect to service the demands of a growing population and booming industry with the bodies of water that it has spent generations destroying. Green energy isn’t China’s future, but the past, and its emperors were far wiser stewards of its rivers than the Maoists and the Communist regime.

The Communist regime can fill Taiwan’s skies with warplanes and threaten India and Australia, hold Canadians hostage and browbeat American diplomats, but it’s powerless when its economic pyramid scheme fails to heat and light the homes of the Chinese people.