California Dems Bet On Identity Politics to Save Newsom

"Larry Elder is the black face of white supremacy. You’ve been warned," a Los Angeles Times column blared. It was the latest low point in the desperate bet on identity politics that had come to define the Democrat strategy for saving Gov. Gavin Newsom from a recall election.

What had Larry Elder done that made him the face of white supremacy? The popular talk show host and gubernatorial candidate blamed the police defunding movement for rising crime. 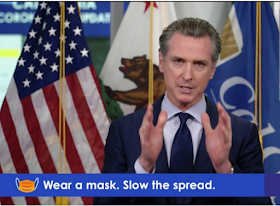 A shocked LA Times reported that Elder had said, “When you reduce the possibility of a bad guy getting caught, getting convicted and getting incarcerated, guess what? Crime goes up.”

But while reality has caught up with the East Coast and even the loopiest parts of the West Coast, like Portland and Seattle, California Democrats have built a reality-free echo chamber in which what’s left of the state media pretend that crime is caused by inequality, junkie tent cities are the fault of capitalism, and forest fires and blackouts are caused by global warming.

And attacks on elderly Asians by young black men are blamed on President Trump’s “racism”.

"California has a unique place on the planet. It's been a place of dreams," Governor Jerry Brown used to rhapsodize. The dream became reality when Democrats built a one-party state around election rigging and demographic change powered by wealthy Hollywood and Big Tech donors.

Now the dream is in danger. It’s not threatened by the inherent irrationality of the one-party state which advocates for both an unreliable power grid based around solar panels and windmills along with electric cars that are likeliest to be charged in the evening when that grid fails to deliver power. Nor is it caused by the billions of dollars sunk into solving the “homeless crisis” only for it to go to building $700,000 apartments, $100,000 sheds, and $2,600 a month tents.

Reality isn’t a problem when you’re living in a world of ideological dreams financed by lotus eater billionaires who made their money selling virtual worlds to the public. Or marrying them.

The TV ads defending Newsom and attacking Republicans are funded by the CEO of Netflix.

But the problem is that enough Californians might actually vote to throw Newsom out. And the Democrat establishment was so arrogant that it never came up with a Plan B.

There’s only the Plan A of identity politics or calling Larry Elder a white supremacist.

California Democrats, most of them white, had assumed that their supremacy was assured once the demographic changes boosted the Latino and Asian populations to high enough numbers. When combined with ballot harvesting and community organizing, a majority-minority state seemed like a place where Democrats, and more importantly, radical lefties could always rule.

This has been the Democrat model for permanent power, not only in California, but nationwide.

And yet it’s Latinos and, increasingly, Asian voters who are turning on Newsom. The rise of the Sage from South Central as a leading candidate only adds insult to identity politics injury.

Newsom tried to compensate for his weak poll numbers among Latinos by picking Alex Padilla to replace Kamala Harris in the Senate. But it turned out that most Latinos didn’t care which race of political crony he picked, what they cared about was being able to go to work and keep their businesses open. Once the reopening of the state was reversed, Newsom’s approval numbers among Latinos tanked. And it’s too late for Newsom to reopen California yet again.

Asians have seen a rise in violent crime, falsely blamed on Trump supporters, the legalization of shoplifting, and the destruction of the pathway of their children to great colleges and careers. Immigrant families are willing to work 20-hour days and face robberies so that their children get ahead. The racist assault on merit in education has been too much for many Asian families.

Asians know perfectly well that while they’re being scolded about making way for more deserving minorities, white Democrat elites are bribing their kids into USC and other schools.

Neither group is likely to go Republican in any sizable number, but given the chance to kick out the most visible member of the Democrat elites that are ruining their lives, they may just take it.

And that’s what has California Democrats terrified.

Democrats built their identity politics plantation around the construct of a menacing GOP ready to deprive minorities of all their rights. In California, where Governor Newsom and his local party men deprive you of your rights (while he parties at the French Laundry), that narrative is hollow.

When they’re reduced to threatening minorities with the white supremacy of Larry Elder, it’s because they’ve monopolized power for so long and recited the same hollow cliches in the echo chambers of their one-party state that they no longer realize how stupid they sound.

Latino and Asian shopkeepers aren’t worried about “white supremacy”, they’re afraid of being shut down by Newsom and robbed by the criminals empowered by Newsom’s donors, like Reed Hastings, the CEO of Netflix, whose own big product conveniently can’t be shoplifted.

Hastings plowed $3 million into the campaign to save Newsom. But such campaigns are dependent on money from wealthy white tycoons being used to manipulate minorities. That worked brilliantly in Georgia where Facebook’s Mark Zuckerberg tilted the odds, but that strategy may be hitting a wall in California despite all the money and the community organizing.

The Democrats have never really considered what might happen if they achieve their majority-minority state only for the minorities to become dissatisfied. Their models, until now, have been cities, urban ghettos ruled by generations of corrupt politicians, welfare voters in the thrall of identity politics grousing about what they might have if it weren’t for the white people.

The recall is a warning sign that California isn’t Newark or Detroit. And that the same old lies aren’t working anywhere the way they used to except among the white lefties who tell them.

Black voters in New York City picked Eric Adams over the lefty candidates. Latino and Asian voters may deliver a shocking defeat to the Democrat machine on the other side of the country.

The common denominator is the widening gap between the wokes and the working class, between the concerns of Latinos and the elites who call them Latinx, between people who think in ideological terms and those who focus on whether they can pay their bills on Thursday.

The Democrats call this “populism”. But it’s trickier to inveigh against populism when it doesn’t involve white men in red caps, but minority voters and a black candidate. They’ll still do it, as the Los Angeles Times showed us, but by then it’s no longer a narrative, it’s sweaty desperation.

The real question that has Democrat strategists sweating bullets in California isn’t whether their party will temporarily lose control over the governorship. The real power isn’t in Sacramento, much as it isn’t in the Oval Office, and that’s why leftists can rule just as well from any branch of government they hold or from the deep administrative state of the bureaucracy.

What really has them terrified is the broader implications for their entire political strategy.

The Democrat machine is run by generations of strategists who polished the national identity politics coalition machine to perfection in the Clinton and Obama eras. It’s all they know and it defines everything about how the Left now functions. Bernie Sanders, who briefly proposed actually talking to the white working class, reducing immigration, and letting go of gun control, was quickly revamped into an identity politics candidate with AOC as his handpicked successor.

And yet there are two political insurgencies among Democrats. The former are liberals who oppose cancel culture while the latter are hard lefties who want less identity politics and more class warfare. Various figures from these insurgencies, whether it’s Bari Weiss or Glenn Greenwald, have become celebrities for opposing the conventional wisdom of the Dems.

A defeat in California will force a severe reckoning about the Democrat political worldview.

If identity politics isn’t a magic bullet for a one-party state, there will have to be a rethink. And the establishment may opt for either a more centrist strategy or class warfare over race. Either one will lead to a showdown with AOC and the Squad, not to mention generations of minority apparatchiks whose only value has been to serve as the black, Latino, and Asian faces of the “white supremacy” that put Newsom, Biden, and other corrupt figures like them in power.

If California Democrats can’t scare minority voters with the white supremacy of Larry Elder, what hope is there for a party that made identity politics its brand, its strategy, and its future?

The Newsom recall has the potential to not only change California, but America.
Daniel Greenfield is a Shillman Journalism Fellow at the David Horowitz Freedom Center. This article previously appeared at the Center's Front Page Magazine.