Earth Day is Killing Us

Grouches complain that a lot of fake holidays are created by companies, but Earth Day is actually a fake holiday created by a sharp Madison Avenue ad agency, and the name comes to us from the same guy who coined, “Timex: It takes a licking and keeps on ticking".

The Earth takes a licking much better than Timex watches, but it’s the job of ad agencies to convince us that consumer products are permanent, while the world is ephemeral. 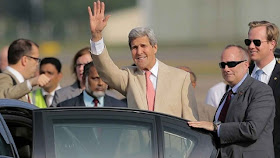 Madison Avenue supplied the name, but Senator Gaylord Nelson, the eugenicist Democrat, had come up with the idea for the event. Gaylord’s Earth Day kickoff hit a bump when Indians showed up and threw garbage on the stage to protest his environmental plan to seize their land for a national park. But the media excised this inconvenient truth from Earth Day history.

It was 1970. Nixon’s Vietnamization was underway and the Left, sensing that its antiwar protests had a limited future, was looking to build a new movement. The idea came from Gaylord, the name came from Madison Avenue, but the culture war needed young radicals to organize, show up, protest, and tell their parents that they wanted Democrats running America forever.

That’s where Ira Einhorn, a young radical, who co-founded Earth Day and acted as the master of ceremonies at its first rally, came in. Einhorn had started out as an anti-war activist, but like Gaylord and other Democrats, he could see that the anti-war publicity machine was going away.

Everyone from politicians to ad agencies to aspiring gurus like Einhorn was looking for the next big cultural phenomenon that would speak to the narcissism of the luckiest generation in history. Einhorn realized that civil rights and anti-war rallies were getting old. The future was a new environmentalism that would make the old environmentalist eugenics look cool and hip.

Einhorn ended up committing totally by killing his girlfriend and composting her body. Then he fled to Europe where the same lefty activist network went on protecting him from prison.

Earth Day didn’t do anything for the environment except make a huge mess. Parade floats filled with garbage were used to warn about pollution. Students chalked messages on the street. Everyone drove out in cars for Earth Day to warn about the dangers of driving cars.

Gaylord’s Earth Day speech was revealing of what environmentalism was and wasn’t.

"Environment is all of America and its problems. It is rats in the ghetto. It is a hungry child in a land of affluence. It is housing that is not worthy of the name; neighborhoods not fit to inhabit. Environment is a problem perpetuated by the expenditure of billions a year on the Vietnam War," Gaylord rambled.

Environmentalism was everything and nothing. It was every Democrat agenda rolled into one. It was the welfare state and the anti-war movement.

If the Democrats were going to run on it, then it was environmentalism.

And if they weren’t, then it wasn’t.

At no time in his speech did Gaylord address any actual environmental problem. Instead he focused on urban blight, caused by his own party, and shamed Americans for their prosperity.

“Our goal is a new American ethic that sets new standards for progress, emphasizing human dignity and well being rather than an endless parade of technology that produces more gadgets, more waste, more pollution,” Gaylord insisted, invoking the faux spirituality already in vogue.

Finally he declared an "environmental war" to save America's cities that would only take "$20 to $25 billion more a year in federal money than we are spending or asking for now."

The endless war on the environment is starting to cost more than any actual war.

Billions have been spent with little to show for it except more cash in the pockets of environmentalist Democrats like Al Gore who built a $300 million fortune with his advocacy.

The planet is no better and no worse off since 1970. The same isn’t true of America.

In 1970, 62% of aggregate income went to the middle class. Today it's only 29%. The winners of the environmental economic war on Americans were the upper crust Earth Day crowd.

There are more gadgets than ever, but fewer Americans can afford them.

Environmentalist policies helped push jobs out to China while leaving American cities and towns barren. There are more rats in the ghettos and housing not worthy of its name than ever before.

The current big objective of the environmentalist movement and the Biden administration is to crush coal while taking another huge bite out of the remnants of the American middle class.

But it’s a great analogy if you’re trying to turn more of the middle class into the lower class.

Jimmy Carter made Denis Hayes, a key organizer of Earth Day, the director of the Federal Solar Energy Research Institute. Hayes had an undergraduate degree in history from Stanford. Despite never having a degree in anything science related, he became a visiting professor at Stanford's School of Engineering and the CEO of Earth Day. He remains a board member of Earth Day alongside such notables as the President of Finland, the head of the Wells Fargo Foundation, and a woman whose bio lists her as an “internationally renowned chef.”

The Earth Day store offers "premium organic" t-shirts urging "Make Every Day Earth Day" for $28 bucks "Far out, man! This classic tie-dye T-shirt is bringing the 60’s back in style," the ad copy declares. The details mention that the actual fabric is imported. You can guess from where.

The same goes for the rest of the expensive junk in the Earth Day store.

In 1970, there were 18 million manufacturing jobs in the United States. Today there are 12 million and that’s after a period of record growth under President Trump.

China has built a manufacturing empire. It happily celebrates Earth Day because every advent of the fake Madison Avenue headline means more American jobs and dollars headed its way.

Earth Day, according to Senator Gaylord Nelson, was supposed to address poverty in America. Instead Earth Day has been the biggest machine for creating poverty, hunger, and misery in America. Environmentalism didn’t fight poverty, it spread it, trading American jobs and social mobility for the smugness of upper class students seeking a new political fight after Vietnam.

As much as the anti-war movement hurt America, the environmental movement did worse.

Almost as many Americans kill themselves in one year as died in the entire Vietnam War. The suicide rate shot up 35% in the last twenty years.

Losing America was much worse than losing Vietnam.

Every Earth Day comes with the usual recitation of political dogma with which children are indoctrinated before they can even read. On one side are piles of trash and on the other side are whales and polar bears happily dancing arm-in-fluke. The truth is that on one side there are Ivy League colleges and environmentalist think tanks while on the other side there is the Rust Belt, there are millions of Americans without jobs and without hope, and millions more waiting to see if the Biden administration will take away their jobs, their homes, and their futures.

The wages of Earth Day are ‘Love Canals’ all over America with dying towns, workers permanently out of work, dying of meth, committing suicide in unprecedented numbers.

It’s time to end the great hoax from Madison Avenue, from a brutal killer and a political hack, before it destroys what’s left of America.