The D.C. Occupation Will Continue Until Democracy is Saved

On a cold, windy day with a small group of spectators watching from behind barbed wire, Joseph Robinette Biden Jr. swore another in a long series of false oaths before his motorcade passed between a long row of soldiers with their backs to him looking outward for threats.

No inauguration has been this empty in a century of American history. And at no inauguration have the spectators been outnumbered by a raw display of armed force. American presidents have been inaugurated in wartime and during actual national emergencies with a better turnout. 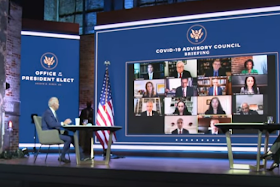 Through world wars and wars on terror, Washington D.C. has remained a national capital where the hundreds of millions of taxpayers who labor to pay for its grand edifices, free museums, and lavish lifestyles could briefly come to enjoy a little of the life lived by the ruling class in the Imperial City. Now the ruling class has made it clear that it doesn’t want peasants entering D.C.

Even as Biden’s team prepped the executive orders that would end the national emergency at the border and shut down construction of the wall, new walls topped by razor wire were rising across the imperial city. The new Fortress of Government sealed off two miles of the National Mall and parts of downtown D.C. and filled it with more soldiers than are deployed in Iraq.

The Secret Service designated green and red zones. Some 25,000 National Guard members were dispatched from Vermont, Maine, Louisiana, Wisconsin, Ohio, Minnesota, New Hampshire, Connecticut, Arkansas, Missouri, South Carolina, Rhode Island, Virginia, and Colorado to prepare for a fake invasion that never came. But the armored vehicles and heavy weaponry did come. President Trump had wanted a military parade that would show America’s strength to the world. Biden held his own military parade to intimidate his fellow Americans.

Democrats had deployed more soldiers in D.C. than they had in Iraq and Afghanistan while authorizing them to use lethal force and investigating their politics before the deployment. The radical leftists who had resisted using the military to fight terrorism or secure the border from invasion were eager to deploy the military against the people of the United States of America.

The handfuls of ordinary people who arrived, as Americans always do, to attend the inauguration of a new president were confronted with heavy weapons and barbed wire.

D.C. had become a Baghdad and Berlin of checkpoints, choking off access to much of the city, closing roads, bridges, and metro stations. Soldiers could be seen on every corner, and the 25,000 troops were bolstered by 4,000 Marshalls, and a motley crew of local forces, including 200 members of the NYPD, 40 members of the Chicago police, New Jersey and Maryland state troopers, Miami-Dade cops, and other law enforcement officers who were needed back home.

24 people were shot in Chicago this weekend and murders are already up 125% this year in New York City. Those officers could have done more good at home, but Democrats don’t care about murder victims in urban areas, instead redeploying officers to D.C. in a show of force.

Biden took office in a city under military occupation whose businesses were closed and boarded up. The D.C. government had tried to force hotels to shut down. The hotels didn’t close, but there were hardly any people. Instead the hotels were filled with soldiers tramping through their lobbies. Any tourists that did come found nothing to see except barricades and barbed wire.

Filling D.C. with soldiers meant that no one was going to measure Biden’s crowds. The only crowds were heavily armed and had been ordered to come. The complete lack of enthusiasm for the new one-party state that was getting its Mussolini on was the dog that didn’t bark.

Questioning Biden’s election has been deemed to be incitement. It’s enough to get you censored, deplatformed, and fired by the companies standing behind him. The election challenges have been used as the pretext for a military occupation of Washington D.C. But the cloud of a disputed election, like the winter clouds overhead, still hung over the inauguration.

There were no crowds, just soldiers. After the military and police contingent, the second largest group there for the inauguration weren’t Biden’s civilian supporters, but his propagandists. With few people, the media had to work twice as hard to manufacture the illusion that this was a popular leader taking office instead of a usurper imposed by Amazon, Google, Facebook, and the rest of the political, cultural, and economic oligarchy which owns the media on America.

CNN, a subsidiary of AT&T, had already gushed about, "Joe Biden's arms embracing America". MSNBC, a subsidiary of Comcast, compared Biden to God. "He heals the brokenhearted and binds up their wounds." The only wounds being bound up were those of the ruling class which had temporarily lost electoral power to an army of flyover country workers and peasants, only to reclaim it with sedition, wiretapping, abuse of power, billions of dollars, and soldiers in the street.

Popular leaders, elected or unelected, might have troops in their cities, but they also have adoring crowds to cheer them on. Biden’s only cheers were coming from employees of huge corporations whose jobs depend on praising him as the greatest thing since SuperPACs.

Biden couldn’t manage the cheering crowds that greeted even the most mediocre presidents on their arrival. The band might as well have struck up a rousing chorus of, “Hail to the Thief.”

Jokes like that are all but illegal these days even though they were ubiquitous during the Bush and Trump administrations. But jokes only need to be banned when they’re too close to the truth. The hysterical fascist theater with troops in the streets and fawning praise on the lips of the press are all efforts to overcompensate for the hollow man taking a false oath on a bible.

This isn’t the pageantry of Stalin or Hitler. It’s the weary theater of Brezhnev, a senescent leader of a decaying regime being propped up by desperate threats of force by the nomenklatura. Even though the media has told us more about Biden’s dogs than it has about any of the Americans killed by Islamic terrorists enabled by the open borders that Biden just reinstated, no one cares.

Biden isn’t a charismatic leader. He isn’t moving the cause forward. He’s a placeholder for a ruling class that wants homes in Dupont Circle that it buys by selling out America to China, by ruining our economy with environmental consulting gigs and racial contract quotas, and for all the manifold ways which the swamp is coming back as Biden’s wetlands restoration project.

“Hail to the Thief” is as much their anthem as it is Biden’s. They fought to keep hold of D.C., the center of their power base not because they care about its history or that of this country, but because it’s where they network, collaborate, and do their dirty little deals at our expense.

The troops in the street are their warning to the rest of the country about who is really in charge.

And it isn’t Joe Jr, who, along with his criminal family, will be allowed to dip their beaks in cash and cocaine until they’re sopping wet, along with every aide, staffer, and associate. Biden will be fawned over, his idiot wife will be dubbed a doctor, and the investigations involving his son and brother will be swiftly dropped. And when the time is right, Kamala Harris will step into his place.

When the Soviet Union was entering its last days, one leader quickly made way for another. The parade of old Communist hacks in their dotage became a procession of political funerals. Generations after the revolution and the purges, the only thing anyone in Moscow believed in was the power and decadence of the ruling class. That and the threat America posed to them.

These are still the only three things that Washington D.C.’s ruling class believes in anymore.

Democrats and their media claim that this charade is a “victory for democracy”.

"We’ve seen a force that would shatter our nation rather than share it, would destroy our country if it meant delaying democracy. And this effort very nearly succeeded. But while democracy can be periodically delayed, it can never be permanently defeated," Amanda Gorman, the Harvard youth poetess, sonorously recited her tin-eared Maoist verses at the inauguration.

But where is this democracy? Where are the adoring crowds, the joyous mobs celebrating and the people cheering the tremendous victory of the democracy of Google, Facebook, Amazon, AT&T, Comcast and their D.C. lobbyists and associates over the Rust Belt and the flyovers?

Biden and the Democrats celebrated their democratic victory with barbed wire, troops in the streets, political terror, and the threat of even more political repression to come.

"There is a broader societal issue that is going to take years to detox the disinformation," Ben Rhodes, the Obama adviser who had boasted of creating a media echo chamber, ranted on Comcast's MSNBC. On that same state TV news network, John Brennan warned that "because of this growth of polarization in the United States" members of the Biden team would be "moving in laser-like fashion" to "root out an insidious threat to our democracy".

Democracy is in a state of permanent emergency that requires locking down D.C., filling it with soldiers, walls, and barbed wire, and investigating political crimes. And D.C. will do everything it can to end the threat that Americans pose to democracy even if its ruling class has to live in its green zone surrounded by troops and barbed wire until democracy is saved from Americans.

Biden, we are told by the political interests and corporations advocating this, is incredibly popular. But the crowds of his devotees can’t be allowed to come to Washington D.C. Anyone who doubts that Biden is incredibly popular is inciting violence and will have to be rooted out as an insidious threat to our democracy. The more people doubt Biden’s popularity, the longer D.C. will have to be under military occupation until finally no one doubts his legitimacy in office.
Daniel Greenfield, a Shillman Journalism Fellow at the Freedom Center, is an investigative journalist and writer focusing on the radical Left and Islamic terrorism.
This article first appeared exclusively at Front Page Magazine.
Daniel Greenfield at January 24, 2021
Share