California’s Internet Censorship Office is Watching What You Say

"Report misinformation," a flier from California's Office of Election Cybersecurity blares. Social media users are urged to report "misleading" materials to the Secretary of State's office.

A government office created by California Democrats is monitoring hashtags, classifying political speech it opposes by “threat level”, taking screenshots of posts, and then storing the information indefinitely, before reporting the offending speech to social media companies for censorship. 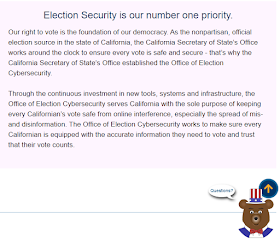 “Election Security is our number one priority,” the Office claims. But its focus isn’t securing elections by fighting hackers or voter fraud. Instead it’s fighting “the spread of mis- and disinformation”. That’s an Orwellian way of saying that it’s fighting and censoring online speech.

“We created the CA Office of Election Cybersecurity to keep your vote safe - so you don’t have to worry! The Office is a non-partisan government arm dedicated to ensuring your vote is safe,” Secretary of State's office unconvincingly tweeted.

What sort of speech is a government office run by Democrats trying to censor? One example of political speech successfully censored by the Office of Election Cybersecurity is a tweet that “alleged thousands of 2020 ballots were tossed out".

There's nothing that reassures voters that their elections are safe like a government office spying on anyone who says that they're not, and taking immediate steps to silence them.

The Office of Election Cybersecurity isn’t securing the technology of elections, instead it’s monitoring online speech and flagging views that the government office disagrees with to be taken down by its political allies in California’s Big Tech monopolies that dominate social media.

Jenna Dresner, the senior public information officer for the Office of Election Cybersecurity, boasted that the government office maintains an internal database of online speech coded by threat level, and that its censorship calls had resulted in removals 77% of the time.

Desner is a member of the Los Angeles County Young Democrats, who had formerly worked for Rep. Karen Bass, Attorney General Xavier Becerra, and other Democrat figures. The Office of Election Cybersecurity operates under Secretary of State Alex Padilla, who was chosen by Governor Newsom to replace Senator Kamala Harris. And the bill creating California’s own office of internet censorship was sponsored by two Democrats.

The Office of Election Cybersecurity isn’t non-partisan and it isn’t keeping anyone’s votes safe. It’s in a position to use government power to censor questions about election fraud by its party, while working with a consulting firm involved in one of the most contentious elements of the election, whose results the office’s boss expects will put him in the United States Senate.

Corruption is one thing. Government censorship of complaints about corruption is another.

70 years after George Orwell wrote 1984, California Democrats had created their own Ministry of Information inside the government in a blatant violation of the First Amendment. The Democrat operatives running the government censorship office claim that they aren’t engaging in censorship because they’re not the ones directly censoring online speech. Yet.

“We don’t take down posts, that is not our role to play,” Dresner insisted. “We alert potential sources of misinformation to the social media companies."

That’s the difference between the government sending in jackbooted thugs to smash up a printing press and putting in a call to the editor warning him not to print a particular article.

Freedom of Speech doesn’t just refer to the former, but also to the chilling effect of the latter.

"The Bill of Rights was designed to keep agents of government and official eavesdroppers away from assemblies of people. The aim was to allow men to be free and independent and to assert their rights against government," Justice Douglas once wrote. "When an intelligence officer looks over every nonconformist's shoulder in the library... the America once extolled as the voice of liberty heard around the world no longer is cast in the image which Jefferson and Madison designed, but more in the Russian image."

That’s exactly what California Democrats have in mind by creating databases of political enemies, ranking them by “threat level”, and pressuring their allied monopolies to silence them.

Democrats had previously claimed that they were not engaging in censorship because they were pressuring Facebook CEO Mark Zuckerberg and others to remove general categories of speech in hearings and statements. That was enough of a chilling effect and an assault on the First Amendment. But in California, an actual government office is monitoring speech, treating it as a threat, and directing social media companies to remove specific speech by individuals.

These days the former liberals who once upheld the “chilling effect” in Gibson v. Florida Legislative Investigation Committee, and who denounced McCarthyism, are assembling lists, and censoring their political opponents to fight the dreaded scourge of “misinformation”.

For now. How long until the same Democrat operatives who claimed that public speech poses a threat to “election security” start making the same claims about private speech? As public speech is censored and goes underground, the push will be on to monitor private speech.

If Aunt Mary saying on Facebook that thousands of ballots were thrown out is a threat to “election integrity”, won’t it still be a threat when she whispers it to Grandma Sue? 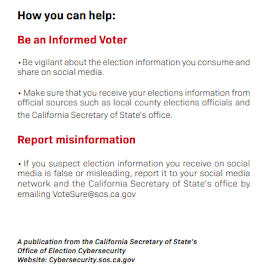 in private, is not reassuring. The First Amendment was meant to protect public speech, not merely private speech. American political freedom was built on people putting their speech “out there for the world to see”. Democrats used to embrace that. Now they view it as a threat.

California's Office of Election Cybersecurity is the latest attempt by Democrats to use a fake crisis of disinformation that they invented as a pretext for political censorship. And the use of a government office to monitor, record, and track speech for censorship makes it impossible to classify internet censorship as anything but an unconstitutional assault on the Bill of Rights.

Democrat administrations refuse to implement basic election security protocols such as voter ID, claiming it’s too onerous, and deny that election fraud is a problem, but insist that political speech is an urgent threat and must be met with relentless censorship and surveillance.

That is how totalitarian regimes behave and it’s a threat to elections and to the Bill of Rights.

California's Office of Election Cybersecurity is one of the best possible test cases for fighting political censorship. It’s not an issue of private companies controlling their own platforms, but of a government office monitoring speech and classifying the views it wants to see eliminated.

The First Amendment threat of internet censorship is no longer something that might happen.

It’s here. Now. Republicans just have to decide if it’s a battle they’re willing to fight. But if they don’t act soon, their own speech might find its way into a government political threat database.
Daniel Greenfield, a Shillman Journalism Fellow at the Freedom Center, is an investigative journalist and writer focusing on the radical Left and Islamic terrorism.
Daniel Greenfield at January 10, 2021
Share