Two of the most notorious bigots in the House of Representatives signed a letter to Facebook CEO Mark Zuckerberg demanding that he “eradicate anti-Muslim bigotry from Facebook”.

The three-page letter signed by Rep. Ilhan Omar, Rep. Rashida Tlaib, as well as 28 other left-wing House members, spends a great deal of time demanding the removal of what it calls "anti-Muslim content" without ever specifically defining it. That's convenient considering Omar and Tlaib's own history of racism and antisemitism, and support for the sorts of Islamic bigotry and violence that groups like CAIR, which supports the letter, have become known for. 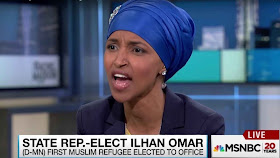 Considering the letter’s call for, "100 percent proactive detection and removal of anti-Muslim content", the safe assumption would be that they want to ban everything critical of Islam.

That's a disturbing attack on the First Amendment coming from 30 House members.

Democrats have repeatedly pressured Facebook and other social media companies to remove speech they politically disapprove of, whether by President Trump or other conservatives, eroding the thin line between private companies acting on their own initiative and government officials conspiring to violate the First Amendment by banning certain kinds of political speech.

30 House members would now like Facebook to censor criticism of Islam and political protests against Islamic terrorism. One of the few examples of anti-Muslim content in the House letter was a political protest against the Islamic Society of North America’s 2019 conference.

That was the conference which included an appearance by two Democrat presidential candidates, Bernie Sanders and Julian Castro, whose forum was moderated by Salam Al-Marayati, the head of MPAC, who had defended Hamas and Hezbollah. Also participating in a round table at the conference was Imam Siraj Wahhaj, an unindicted co-conspirator in the World Trade Center bombing, who has defended the Islamic mandate to kill gay people.

This is the sort of information that AOC, Omar, and 28 other House Democrats, want banned.

House Democrats trying to shut down protests targeting their own candidates is a blatant violation of the First Amendment which was meant to prevent exactly that kind of thing.

And the party of social justice wants to stop Americans from protesting against an Imam who says things like, ”Brothers and sisters, you know what the punishment is, if a man is found with another man? The Prophet Mohammad said the one who does it and the one to whom it is done to, kill them both.” What happens when ‘anti-Muslim content’ meets anti-gay content?

The 30 House Democrats don’t want to talk about any of this which is why their letter doesn’t.

Even Omar and Tlaib can’t quite openly call for blasphemy regulations for social media, but they conveniently leave terms like “anti-Muslim content” undefined and then demand that Facebook outsource the suppression protocols to "senior staff focused on anti-Muslim bigotry issues" backed by diversity training on "civil rights issues and common words, phrases, tropes or visuals used by hate actors to dehumanize and demonize Muslims".

And if that's not enough, there's an independent third-party review of Facebook’s compliance.

CAIR and other Muslim Brotherhood groups would be brought in to define what “anti-Muslim content” is and then senior staff, approved of by CAIR and its allies, would set moderation policies to suppress “tropes” used by “hate actors” like Jihad, Sharia, Taqiyya, and terrorism.

Cartoons of Mohammed, mentions of blasphemy, hate, and terrorism would all be censored.

It's not hard to spot what sort of content they're after.

The House Democrat blasphemy and terror letter has been endorsed by CAIR and the Islamic Networks Group, but beyond these traditional Islamist groups, it has the backing of pro-terror groups like Code Pink and JVP, and assorted anti-war organizations. These groups are less concerned with blasphemy, but very focused on preventing America from fighting terrorists.

CAIR had demanded the removal of Mohammed's image from the Supreme Court, and more recently compared magazines publishing cartoons of Mohammed to ISIS. A board member of the Muslim Brotherhood group had insisted that, "[t]he right to free speech is not absolute."

The Founding Fathers and the Constitution disagreed.

The letter also cites a Muslim Advocates report which listed examples of "anti-Muslim content" that they wanted Facebook to censor that included President Trump's call for a ban on migration from Islamic terror nations, and a Trump campaign ad which described AOC, Omar, Tlaib, and Pressley as socialists who had made "anti-Israel, anti-American, and pro-terrorist remarks".

AOC, Omar, Tlaib, and other Democrats have signed a letter demanding that Facebook censor political speech critical of them. That’s a grotesque assault on the First Amendment.

Another example of “anti-Muslim content” from the Muslim Advocates report was an Israeli Facebook user who had written negatively about Omar, Trudeau, and Corbyn.

Omar responded to this by ranting that "foreign interference – whether by individuals or governments – is still a grave threat to our democracy” and that “malicious actors operating in a foreign country, Israel”, were “spreading misinformation and hate speech to influence elections in the United States." Even though there’s no evidence that elections were actually influenced.

But, once again, the kind of “anti-Muslim content” that Omar and her political allies seem to want to ban involves criticism of her and of them. The “grave threat” here is coming from Rep. Omar.

The letter claims that its signers also want Facebook to remove “any hate content directed at a religious or ethnic group”, but Rep. Ilhan Omar, one of the letter’s signers, has been the House’s worst offender, tweeting antisemitic content, including her infamous “Benjamins” tweet.

If House Democrats were serious about removing hate, they would have removed Rep. Omar.

Facebook already engages in extensive monitoring and censorship. This isn’t about taking down bigotry, but about removing political speech and content that Islamists consider blasphemous. It’s also about suppressing the political organizations that combat Islamist hate and violence.

It’s no coincidence that the type of political speech that Omar, Tlaib, Carson, and other House members want to censor casts a negative light on their own political alliances with Islamists, their bigotry, and their ugly views. And they would like Facebook to do the censoring for them.

The more Democrat officials lay out the kind of censorship they would like internet platforms to perform, the more the First Amendment’s guarantee of free speech becomes a dead letter. And this letter, signed by 30 House Democrats, is a new threat to our freedom of speech.

America does not have blasphemy laws. And politicians are not allowed to ban speech they don’t like. The letter to Facebook makes it more urgent than ever that our elected officials find ways to protect the marketplace of ideas from political censorship by Democrats and Facebook.
Daniel Greenfield, a Shillman Journalism Fellow at the Freedom Center, is an investigative journalist and writer focusing on the radical Left and Islamic terrorism.
Daniel Greenfield at December 22, 2020
Share