Biden has said meaningless things like "we condemn the violence", and "I condemn this violence unequivocally" as if violence were an independent entity. Condemning violence, like condemning war, is either pacifism or evasion. Since Biden isn’t a pacifist, he’s evading.

Violence is a concept. You don’t condemn a concept: you condemn its perpetrators.

The Democrats embraced Black Lives Matter, they even fundraised on behalf of the rioters and looters. Senator Kamala Harris tweeted out a link to the Minnesota Freedom Fund which bailed out rioters and looters, and Jaleel Stallings, who was accused of shooting at police officers.

According to police officers, Stallings had crouched near a car during the riots and opened fire on them. He faced two counts of attempted second-degree murder and the bail fund backed by Kamala Harris and several Biden staffers still bailed out the alleged wannabe cop-killer. 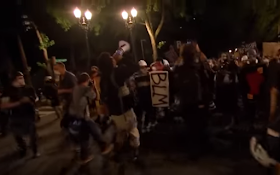 Once Biden goes into details, then his condemnation of “violence” actually turns out to be a condemnation of cops and conservatives. Or, as he put it, “I have condemned all forms of violence – police violence, lawless violence and violence perpetrated by extreme, right-wing militia groups.” When he condemns “violence”, he really means he’s condemning the police.

The closest that Biden comes to condemning the violence by Black Lives Matter, a racist domestic terrorist group which has devastated entire cities, is condemning the “lawless”. And he does it so vaguely as not to offend BLM and its supporters while giving the shopkeepers whose lifetime of work, his supporters burned to the ground, the false impression he stands with them.

Burning churches is a bad thing. But not so bad that Biden will name the church burners. And when Biden fails to condemn Black Lives Matter, he supports its violent riots.

Even while the media falsely claims that the riots are peaceful, the hate group’s co-founders, Patrisse Cullors, Alicia Garza and Opal Tometi, have not been asked to condemn it. On the rare occasions when they’ve been asked about it, they’re deflected or dismissed the violence.

Ask BLM’s co-founders about the hate group’s violent riots and they’ll typically reframe the question by dismissing it as a mere issue of property and claim that they value life more. That’s despite the fact that hundreds of first responders and civilians have been wounded in the riots.

Speaking at a Penn State virtual event, Cullors described rioters as "expressing righteous rage" and suggested that society needs to avoid situations where "people feel like they have to be so desperate that they disrupt people’s businesses.” Not only didn’t the Black Lives Matter co-founder condemn her movement’s violence, she justified it, while denouncing capitalism.

Cullors, who has in the past been paid $10,000 to appear at virtual college events, is represented by CAA, the top talent agency in the country which was accused of complicity in Harvey Weinstein’s abuses, and whose clients include Tom Cruise and Robert De Niro.

She’s also the author of “When They Call You a Terrorist: A Black Lives Matter Memoir”, with an introduction by Angela Davis, a domestic terrorist who endorsed Biden, and an opening quote from Assata Shakur, a black nationalist cop-killer listed by the FBI as a most wanted terrorist.

That quote from the fugitive cop killer, "It is our duty to fight for our freedom" has become a BLM chant It appears in Shakur’s biography just after she indirectly mentions the shootout that killed Trooper Werner Foerster and hails the “guerrillas” of her Black Liberation Army terrorist group.

The phrase just before the chant is, “We must gain our liberation by any means necessary”.

After the chant is a dedication to, among other black nationalist terrorists, Mark Essex, a racist killer who opened fire on New Year’s Eve in New Orleans killing, among others, a honeymooning couple. Betty Steagall was shot in the back of her head while embracing her murdered husband. Essex left a Black Liberation flag lying near the corpses of the doctor and his wife.

This is not the chant of a peaceful movement, but of a violently racist terrorist organization. And it’s been utilized by Democrats, including the Arizona Senate Democrat caucus.

“I just don’t equate the loss of life and the loss of property,” Alicia Garza, another BLM co-founder, replied, when asked about the violence. “We want to value our love of people over property.”

Not only did Garza fail to condemn the violence, she reduced it to a question of property, while reframing the violent riots as a love of people over property. Property, like violence, is an abstraction, a way to avoid confronting what happens when people are terrorized, when the small shop they’ve poured their life and dreams into goes up in flames, while BLM’s founders get tens of thousands of taxpayer dollars to condemn capitalism and defend the looting.

When the National Guard was sent to Baltimore, Garza complained that the soldiers were “standing between Black people and access to resources, they are protecting property”.

Not only do all of Black Lives Matter’ co-founders find ways to justify the violent riots, but some local chapters, which have more control, have been more direct about supporting the violence.

After the massive outbreak of looting in Chicago, Black Lives Matter Chicago issued a press release describing looters as protesters, and claimed that the products in the stores were "hoarded" wealth. The official press release ranted that "black lives are and always will be more important than downtown corporations" and claimed that, "when protesters attack high-end retail stores that are owned by the wealthy and service the wealthy, that is not 'our' city."

Black Lives Matter Chicago organizer Ariel Atkins called the looting, “reparations", claimed that, “winning has come through riots,” and declared, "I will support the looters."

“Anything they want to take, take it,” she said.

Hawk Newsome, the Greater New York Chair of BLM, refused to condemn looting and instead claimed that America is based on looting.

“People just manifested it in different ways. Some people there just raised their fists and said 'I stand with the masses.' Other people were there to destroy things,” Newsome had said earlier of the Minneapolis BLM riots.

Melina Abdullah, the lead organizer of Black Lives Matter in Los Angeles, whose chapter has collaborated with Farrakhan and the Nation of Islam, had its rally lead to multiple attacks on Jewish synagogues and businesses complete with antisemitic chants and graffiti.

Abdullah, like her hate group’s co-founders, dismissed the rioting. “The looting is not as violent as the police violence that is the source of the protesting. Focusing on broken windows is a deliberate decision.”

The media has repeatedly mischaracterized Black Lives Matter riots as “mostly peaceful” as long as there is a prologue during which the racists at the rally chant slogans before the violence begins. This is a fundamental distortion of the truth. A peaceful march ends peacefully. A violent rally ends violently. A mostly peaceful march is really a violent riot.

Would you go out and meet someone if they told you it would be a mostly peaceful encounter?

That’s not what peaceful means. Like Biden’s condemnations of violence, it’s an evasion.

Nobody in the media bothers to ask or discuss whether the Black Lives Matter philosophy and ideology is peaceful. That’s because there’s a large body of evidence that shows it isn’t. Instead the media nods along as BLM leaders pull the same tired old trick of reframing their movement’s violence as an affirmation of the value of black lives and reduce their victims to “property”.

Black Lives Matter violence springs directly from the violent ideology of black nationalism. The movement’s leaders make no secret of drawing their inspiration from domestic terrorists like Assata Shakur and Angela Davis. Democrats and their media choose to ignore these facts.

Anyone can condemn an abstract evil. The challenge is condemning the perpetrators.

Joe Biden refuses to condemn Black Lives Matter. He can’t. They’re part of his base. While Americans are increasingly turning against the racist hate group, Democrats still back it. After months of rioting, support for Black Lives Matter has dropped 12% among Americans, but only 4% among Democrats, 92% of whom still support the violent black nationalist movement.

And so Joe’s trying to have it both ways. He’s condemning the violence while allying with the violent. He won’t disavow BLM or his endorsement from Angela Davis, while claiming to oppose violence. He’s refusing to condemn the perpetrators, while condemning the outcome.

That’s as worthless as his career and his candidacy.

If you support the violent, you support the violence. If your campaign and your veep help fund bail for a group bailing out rioters and an attempted cop-killer, you can’t claim, as Biden does, to oppose violence “across the board”. Until Biden publicly breaks with the Black Lives Matter movement and condemns its violence by name, he’s complicit in every burned store, every wounded cop, every terrorized child, every lost job, and every broken American city.

Daniel Greenfield, a Shillman Journalism Fellow at the Freedom Center, is an investigative journalist and writer focusing on the radical Left and Islamic terrorism.