The Real Racism of the Coronavirus

As the coronavirus was doing its deadly work, Senator Kamala Harris, Senator Cory Booker, and Senator Elizabeth Warren dispatched a letter to the Secretary of Health and Human Services demanding racial and ethnic data about the sufferers. Why demand information of that sort? Identity politics for profit. 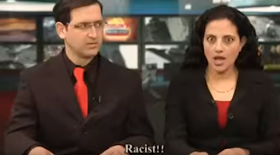 Rep. Alexandria Ocasio Cortez made that agenda even more obvious by tweeting, "COVID deaths
are disproportionately spiking in Black + Brown communities. Why? Because the chronic toll of redlining, environmental racism, wealth gap, etc. ARE underlying health conditions. Inequality is a comorbidity. COVID relief should be drafted with a lens of reparations."

New York City’s government had made the death toll much worse by ignoring the coronavirus and focusing on racism instead. New York City Health Commissioner Oxiris Barbot had wrongly told New Yorkers that they couldn't catch the disease on the subway while focusing on her "racial equity lens."

The racialization of the coronavirus is a cynical attempt to shift the subject from fighting the virus to divisive identity politics. But the “wealth gap” and “environmental racism” are not killing people.

While coronavirus cases have spiked in poorer areas of New York City, they’re highest in the wealthiest areas of Los Angeles. What Beverly Hills and the Bronx have in common isn’t wealth or race.

Why else does Beverly Hills have twice as many cases as Compton?

At the same time, in some places, black people are dying at higher rates than white people. And while lefties reflexively respond to any instance of disparate impact by crying racism, the reasons are more complicated than the cynical political narratives being advanced by Elizabeth Warren or AOC.

Asian people have the highest rates of multigenerational living in the United States at 29%. 26% of African-Americans live in multi-generational households, but only 16% of whites do.

In New York City, a city that has largely lost its white working class, the white multigenerational numbers are far lower. Much of the white population is upscale, young and single. That is a group that is far less vulnerable to the coronavirus than the older multigenerational black families living in the Bronx.

But the coronavirus is also killing the remaining multigenerational white communities in the area.

An Italian-American woman and her three children all died of the coronavirus while four other family members were infected after a family dinner in a high-profile case in nearby New Jersey. Orthodox Jews, who are as likely as Asian-Americans to live in multi-generational household, have also been suffering.

What unites these groups is not racism, but a more traditional way of life.

The coronavirus has been hitting blue urban areas where white people are less likely to live in traditional ways. As the virus heads deeper into the country, going beyond the urban and suburban enclaves where immigrants and tourists nurtured the pandemic, it will impact more traditional white communities.

And yet, because dense urban areas like New York are its best feeding ground, it’s possible that there will be racially disproportionate numbers. But it will be due to the collapse of the urban middle class, not racism. The same trends that priced the middle class out of major cities, leaving no middle ground between poor urban welfare housing and a white upper class, are responsible for these numbers.

The white working class and middle class may have been saved by being forced out of the cities. But this is a collateral effect caused by the wealthy white elites who are Warren and AOC’s biggest backers.

The Chinese virus does not have to affect minorities more. It hit those parts of Los Angeles that are older and more prone to socializing. Why is Beverly Hills so much harder hit than Compton or Boyle Heights? Its average age is also much older than Compton. Bel Air has the fourth highest average age in Los Angeles. So it’s not surprising that it’s among the places hardest hit by the coronavirus.

The Bronx in New York has a much higher average age than Compton or Boyle Heights in LA. That’s why it’s badly affected by the coronavirus, while Compton and Boyle Heights, outwardly similar, aren’t. While high real estate prices hit the white working class of New York City hardest, there has also been an ongoing exodus of black millennials from the city. The Bronx has become more diverse and older.

Lefties like AOC want a simplistic narrative of racism, but that ideology is exactly what politicized the disease and initially led her allies in New York City to insist that fearing the virus was racist.

Black people are dying because Mayor Bill de Blasio and his allies put race ahead of public health. Warren and Cortez want to do the same thing all over again. And there will be blood on their hands.

Identity politics is a tragedy. And it’s another reason why black people are dying of the Chinese virus.

"Something that is scaring me, when I read the comments and some of the reactions, my people, black people, please, please understand that coronavirus is ... you can get it," Idris Elba had posted on social media after coming down with the virus. "There are so many stupid, ridiculous conspiracy theories about black people not being able to get it. ...That is the quickest way to get more black people killed."

Elba was addressing the widespread memes on social media which claimed that black people were immune because of melanin. Memes falsely claimed that there were no coronavirus cases in Africa. Media editorials by African-American writers urged black people not to believe that they were immune.

The real racism was an internal belief in racial superiority spread by hate groups like the Nation of Islam.

“The good news is, we should not be overly anxious about an attack or about a virus, but what we should be anxious about is our slowness to disconnect ourselves from a nation that is in the crosshairs of the Lord of the worlds," Farrakhan's spokeswoman, Minister Ava Muhammad of the NOI, had claimed.

Democrats, including Barack Obama and Rep. Jim Clyburn, a close Biden ally and the third-ranking House Democrat, who is in charge of coronavirus stimulus oversight, have met with the hate group leader.

In Milwaukee, ProPublica, a left-wing site, documented a higher black death rate even as it noted the, “pushback among those who recalled other painful government restrictions — including segregation and mass incarceration — on where black people could walk and gather."

This is an attempt at racializing cultural differences and then blaming racism.

The multigenerational vector of the coronavirus reveals multiple tragedies. The Chinese virus is a social evil that seems to attack good social behavior, like going to churches and synagogues, socializing across generations, and making sure that grandchildren interact with their grandparents, while rewarding bad social behavior, isolation and distancing. It’s almost designed to further fragment American social life.

Its impact also reveals the preexisting social distancing caused by the collapsing American family and the tribalism that fragmented multicultural communities living side by side, and yet infinitely far apart.

Instead of healing the nation, Warren, Harris, Booker, Cortez, and other Democrats divide it even more.

At a time when the country should be coming together, their only thought is of how to tear it apart for their political profit, racializing the virus and then blaming it on racism, instead of on Communist China, which lied about the pandemic, may have created it, and then cornered the market on protective gear.

But blaming China doesn’t serve Warren or AOC’s political interests. They would rather blame America.

This year, Americans will have a choice between President Trump, who is uniting Americans in the fight against the Chinese virus, and Democrats, who want to divide us along the lines of identity politics.

Our true test as a nation will come when we choose between racial division and national unity.