Money in the Toilet

The fastest rising item in the country isn’t gold or bitcoin, it’s the cost of a public bathroom. 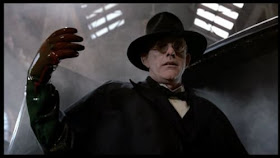 The modern bathroom had a third All-Gender option that the ’08 bathroom didn’t. But adding a non-gender shouldn’t have quadrupled the price. Inflation would have kept the cost well below a million.

Why did a 15-foot by 28-foot bathroom cost millions? Part of the answer may be that San Fran privileges minority businesses and requires that 15% of work hours be carried out by “disadvantaged” workers.

New York City’s bathrooms were always pricey. In ’08, they ran to a million. A recent report noted that the overpriced real estate market had pulled off a new high with a $6 million bathroom. Fit not only for a king, but for Steve Austin. The bionic bathroom is a new record. Last year’s record was a $4.7 million bathroom in the Bronx. An average park bathroom in the Big Apple now runs to $3.6 million.

The Parks Commissioner blamed “market forces”. But while New York City is famously expensive with residents paying the cost of a home elsewhere for a closet in Manhattan, these bathrooms were being set up in parks. You can still pick up a Central Park West condo with multiple rooms for the cost of a public bathroom on Staten Island. Socialists like Senator Bernie Sanders and Rep. Alexandria Ocasio Cortez like to claim that they could put the money of wealthy people to much better use.

Their own city government demonstrates that for the money it takes to get a Central Park apartment with French Empire styling and celebrity neighbors, socialists will give you a toilet. Eventually.

One public bathroom has been under construction for twelve years. That helps explain the cost.

The Bronx bionic bathroom began to be designed in ’06, with a projected completion date of ‘14. Procurement took another year. Construction took 2 years.

By contrast, the entire Empire State Building was built in a year from plans completed in weeks.

It’s not about bathroom size either. A tiny $2 million public bathroom in Brooklyn built two years ago only had 2 urinals and one toilet. It cost came out to $5,000 per square foot.

New York City’s Parks Commissioner blamed the free market. “We do not tell contractors what number to give us — they determine what the market bears,” he pleaded.

There is no market though. Just a broken and corrupt government spending money freely. That makes public bathrooms more expensive than luxury condos and leads to $450 bike racks costing $6,000.

In ‘04, Seattle paid $5 million for 5 self-cleaning toilets. The toilets could clean themselves, freeing Seattle from having to pay for an attendant, but couldn’t clean out the drug users and prostitutes. Four years later, Seattle tried to get rid of them by putting them on eBay. It asked for an $89,000 minimum bid. But no one in the private sector had any interest in flushing that kind of money down the drain.

Seattle finally had to let its million-dollar toilets go for $2,500 each. That’s what market forces look like.

The buyer didn’t try to actually use them. Instead he treated them like an investment, storing them and hoping to sell them to another city. Because city governments are where the real toilet money lies.

Now, Seattle is adding a Ballard Park bathroom for a mere $550,000. That makes it one of the few cities to cut the cost of a bathroom. But it’s a single occupancy bathroom known as a Portland Loo billed as the “perfect” public toilet which costs $90,000. But cities that buy them somehow always spend more.

San Diego bought two “Loos” and spent over half a million dollars to get them going. At one point there were fears that the bathrooms, which cost $175,000 to buy and ship, might run to $800.000.

Where did the money go?

Because you can’t install a public toilet without spending $20,500 per toilet on consultants.

But that wasn’t San Diego’s worst example of flushing money down the toilet. It also built a $2 million public bathroom designed by an artist to evoke Jonathan Livingston Seagull.

Million-dollar public bathrooms are a growing controversy outside the big cities too. In upstate New York, Mayor Rick Davis of Tonawanda, a Democrat, came under fire for a “million-dollar bathroom”. The Democrat claimed that he was creating “a real community asset for generations”. In Pensacola Beach, there was outrage over the $1 million cost of a 900 square foot public bathroom. In Westport, Washington, there were protests and petitions over a plan to build an $840,000 bathroom.

But California and New York continue to lead the nation in runaway bathroom costs and battles.

A Santa Monica park restroom recently came in at $2.3 million. The city manager blamed fair-wage guidelines and an OSHA audit. But Santa Monica was already the home of some of the country’s priciest bathrooms. A Sacramento public bathroom for the homeless was estimated to cost as much as $1 million. In San Diego, residents tried to fight a million-dollar beach bathroom by turning to McCain.

“We are sure Senator John McCain is not in favor of toilets being built close to his condo,” locals claimed of the beach bathroom, which was armored to survive flooding.

Some were concerned that the toilet proposal, which goes back many years, would help illegal aliens.

“All the illegals coming in, being dropped off… what a nice place to go and shower,” a local woman commented.

It remains unknown whether the McCain had ever gotten around to opining on the million-dollar toilet.

It’s not impossible to build public restrooms more affordably. Carolina Beach is looking at 12 stalls for $120,000. Plumbing can be expensive, but it’s not that expensive. The rising cost of bathrooms isn’t due to a shortage, but to a combination of corruption and incompetence with local governments drawing up sweetheart deals and imposing regulatory burdens so that only a handful of contractors get the jobs.

Costs are raised by everything from an insistence on dealing only with minority contractors, to mandates imposed on contractors that raise their expenses, to deals with contractors made by politicians who are in their pockets, to the cost of meeting assorted local regulations. Activists complain that there ought to be more money in city budgets for the poor, when the money is being siphoned by regulations that are supposedly meant to help the poor, but in reality help contractors gouge taxpayers for more money.

But public toilet costs in blue cities appear to be increasing at an even higher rate than its budgets.

San Francisco’s budget doubled to over $10 billion during the same period that its public toilet cost quadrupled. During that same time, New York City’s budget increased by $30 billion to $88.7 billion.

At some point, the toilet bubble will burst. But for now, billions of dollars nationwide are being wasted on building public toilets that cost more than mansions do in some parts of the country.

These public bathrooms are not, for the most part, works of art. Nor will they be around for very long. But as long as they endure, they serve as monuments to Democrat incompetence and corruption.

Socialism is popular again as Dem politicians promise that the government can do everything better. Forget socialized medicine, free college or any of the other 2020 Dem trillion-dollar plans for utopia.

All they can do is flush money down the toilet.

Thank you for reading.
Daniel Greenfield at April 14, 2019
Share